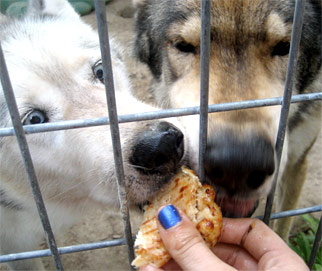 What happens when a company wants to ship pallets loaded with 1,200 pounds of new chicken product into Sam’s Club?  First, they've got to get the packaging system tested. Specifically, they have to pass a new testing process developed by the International Safe Transit Association (ISTA) called ISTA Project 3J.

But then, what does a package testing laboratory do with 1,200 pounds of chicken after it's been tested? Feed it to the wolves.

Compadre is an Austin-based package design and engineering company dedicated to driving sustainability in the manufacturing industry. Compadre's in-house package testing laboratory is one of the first in the country to become certified by the ISTA to perform Project 3J testing.

"We take a different approach to pretty much everything," says Darryl Kelinske, CEO of Compadre. “We like to say we are a little strange, but when it comes sustainability we believe it’s our responsibility to ensure future generations aren’t stuck with our trash.”

When Simmons Prepared Foods, Inc., an Arkansas-based chicken processor, and their packaging company, Mid South Packaging LLC, needed Project 3J testing, they turned to Compadre. "We knew they were one of the first to become certified, and we knew they'd turn our test around about as fast as anyone could," says Lance Martin, account manager of Mid South Packaging. "What we didn't know was that we'd found a company that doesn't take the easy way out.  Sure, they could have thrown the chicken away - but instead, they found a way to use it."

When perishable foods are tested for packaging quality, they are often thrown into the garbage. Compadre, whose core values include "the relentless pursuit of a different way," found an interesting partner to dispose of the chicken in a sustainable way: the Austin Zoo.

When Simmons was advised about the donation, they were delighted. “Making sure that the packaging test was done right, in a timely manner, with reporting that met Sam’s Club expectations – all of that drove the decision to use Compadre,” noted Shelly Parchman, Simmons marketing manager. “Finding such a creative use for all that leftover chicken really shows the spirit of the folks at Compadre.”

"The 1,200 pounds of chicken donated by Compadre will feed the wolves for up to 60 days, depending on their hefty appetite," says Patti Clark, president and executive director of the Austin Zoo. "These types of contributions from the community are great because we not only save money on the cost of food for animals, but we can reallocate those funds to other much needed expansion and construction projects. Compadre's thoughtful donation allows us to move forward on a new run yard for our wolf hybrid and full blooded northern timber wolf who will now have an additional half acre to stretch their long legs."

What's next for Compadre? “Well, we've got a shipment of chocolate cakes coming in to be tested," Kelinske says, "and I hear the bears at the Austin Zoo have a sweet tooth."