When Sandridge Food Corp., Medina, OH, decided to add a new packaging line earlier this year, part of its planning process in 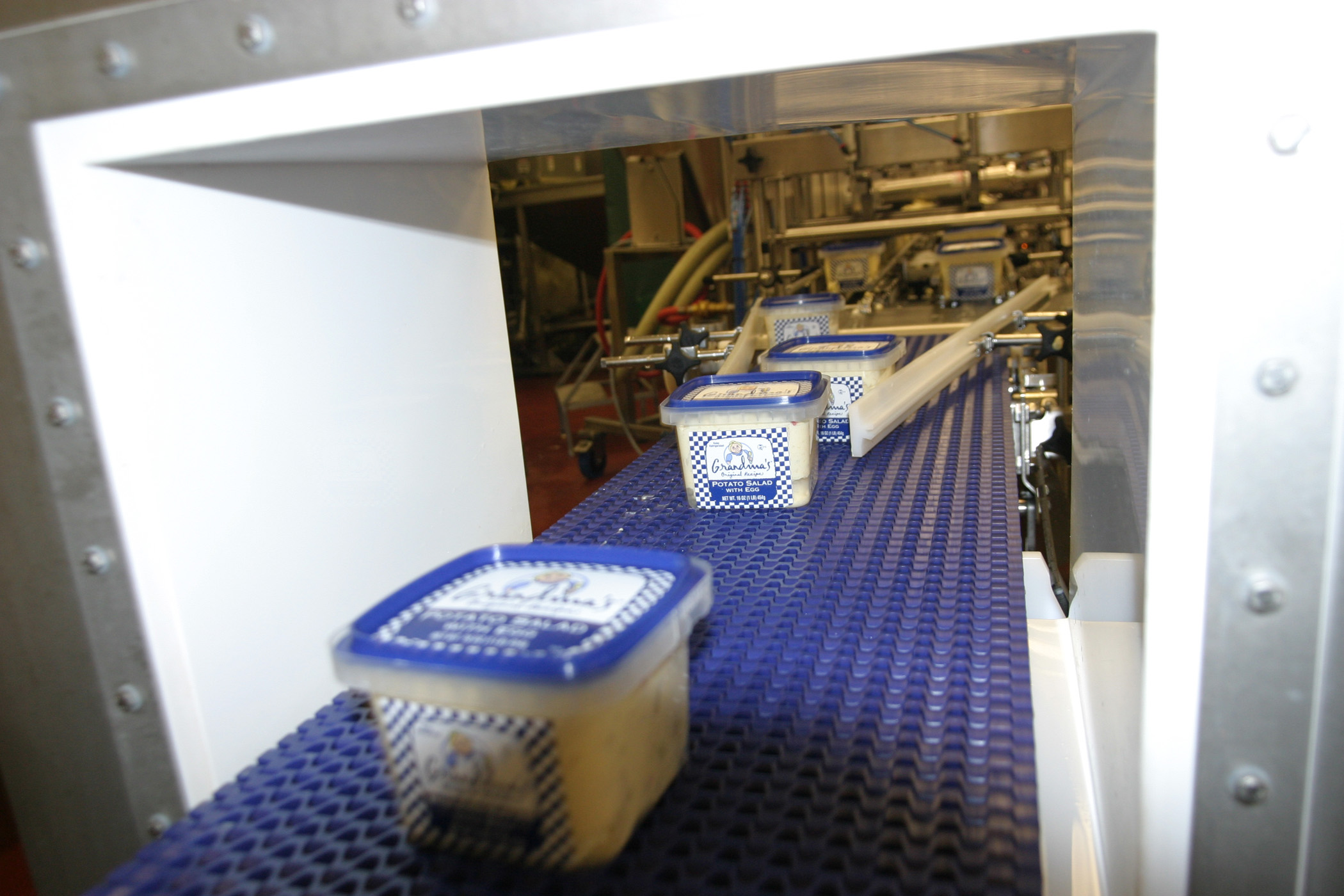 cluded whether or not to reuse an existing metal detection unit. Sandridge, a leader in the North American refrigerated foods industry for more than 50 years, specializes in fresh refrigerated deli salads, sides, soups, sauces and specialty dishes.

Sandridge is a USDA-inspected production facility and certified Safe Quality Food (SQF) 2000 Level 2 food manufacturer. With a focus on producing reliable, handmade quality products, the new line, which packages potato salad under the Grandma's Original Recipes brand, is actually part of a new, larger retail packaging area at the facility.

As part of the project, Sandridge purchased a new machine that fills product into side-by-side plastic containers weighing one, three or five pounds each. Once packaged and lidded, containers form a single line, and are staggered to flow through the metal detection unit for checking.

"With the two different shapes, we're seeing up to five different-size containers that we have to merge to get them through the metal detection," says Jim Meadows, director of process improvement for Sandridge Foods. "There's a lot of engineering around how we get them to come together, and then spread them apart."

Since the line had to be up and operating sooner rather than later, Meadows didn't have time to wait for a new metal detection/conveyor unit to arrive. Meadows did consider modifying the existing conveyor on the metal detection unit to fit the application, but didn't have the manpower available to allocate toward researching and rebuilding the conveyor. So he worked with a local distributor to select the right conveyor for the application - an Aquapruf 7400 Series sanitary plastic chain conveyor system from Dorner Mfg. Corp.

Designed solely for food, pharmaceutical and other industries that require conveyor systems with a high level of sanitation, the conveyor can be disassembled and cleaned in a matter of minutes. Features include tool-less tip-up pulleys for quick release of belt tension, frame cutouts and tool-less belt lifters that raise the belt above the frame for easy access to the inside of the conveyor and quick-release stands for fast belt removal.

Another feature that made the 7400 Series an attractive choice is that Dorner can custom build its AquaPruf conveyor systems to fit into existing metal detection units. As applications and production demands change over time, customers often find themselves with obsolete conveyors that don't fit their needs.

Instead of purchasing a new metal detection/conveyor system, Dorner can design its AquaPruf conveyor platforms with metal free zones to fit existing metal detection units-an option that can be a real cost savings to customers.

The 12-in. wide, six-ft long 7400 Series conveyor at Sandridge Foods Corp. operates about 18 hr/day during the company's busy spring and summer seasons. The conveyor is outfitted with guides to merge the two lanes of product into a single line to pass through the metal detection unit.

The area within the metal detector through which product travels is known as the aperture, "Within the aperture, there needs to be room to accommodate both the conveyor and the product," says A.J. Naber, senior design engineer, Dorner Manufacturing.

"Most metal detectors require a metal-free zone of approximately 1.5 times the aperture height. This constraint presents a challenge, because everything on the conveyor system within this metal-free zone needs to be made from plastic."

According to Naber, the stainless steel conveyor frame also needs to be split to run plastic through the aperture and within the metal-free zone. That's why it's important to properly size a metal detection system to the application. "I recommend considering all supporting equipment including the conveyors and reject method, when selecting a metal detector for a processing line," says Naber. "Think of the metal detector and supporting conveyor line as one integrated component."

"From an engineering standpoint it's always a challenge to make the system as sanitary and compact as possible, while still achieving what the customer needs. Ultimately any design we make needs to be safe, and often, safety and sanitation don't go hand in hand.

"Ideally we want as little human intervention in the reject mechanisms as possible, so we'll add various guards to eliminate access to dangerous areas. However, with every component that is added to the conveyor you can decrease its overall level of sanitation. It's a balancing act.

An automated pusher, located immediately past the aperture, rejects any containers failing to meet standards. "The goal of a metal detection conveyor system is to efficiently remove the contaminated product," says Naber. "The most basic design is stop-on-detect. When the metal detector flags a questionable product, the conveyor line will stop, allowing an operator to manually remove the product."
However, many processing lines utilize more automation, which requires some type of reject mechanism beyond human intervention. Sandridge Foods Corp. uses a push-on-detect system, in which a pusher mechanism mounted to the side of the conveyor ejects the contaminated packages.

Meadows says that employees clean the conveyor about four to five times a day during product changeover. "As far as cleaning, the AquaPruf is designed so we do a better job," Meadows says.

"Accessibility-getting to the underside of the belt and frame-for us, that's what it's all about. From a bacteria point of view, we don't have any bearings and any grease fittings. I don't have any of those mechanisms that usually are a maintenance issue or bacteria issue. Dorner has brought that to the table for us."

Since the 7400 Series has been installed on the metal detection unit, Dorner engineers have visited Meadows in Ohio to check up on the conveyor and see how it's operating.

Sandridge also uses another AquaPruf 7600 Series conveyor system, with a 180-degree turn, on its packaged soup line. "[Dorner] cares after the fact," says Meadows. "It's just not about the sale, they care really about what's going on down stream. I feel like I've got good quality conveyors here with Dorner."