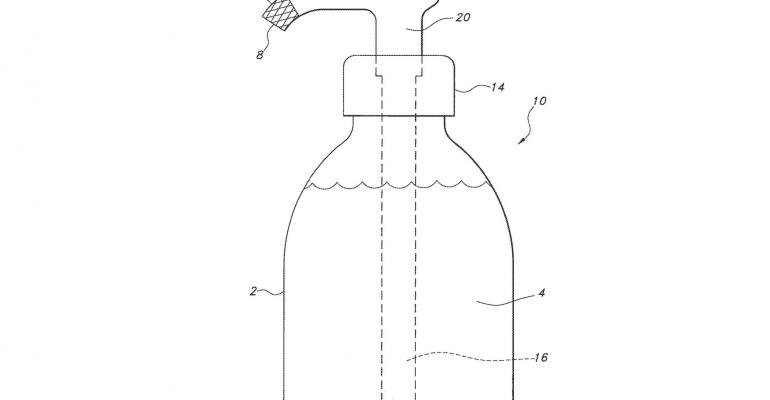 Bottle spout has catalyst affixed inside.

This published patent filing relates to a bottle of skin-care lotion in packaging that uses a catalyst to enrich the oxygen content of the product as it’s dispensed at the time of use.

Oxygen is claimed to reduce wrinkling and other effects of aging by helping to nourish and enrich the skin. That’s been done conventionally using a two-part system of a peroxide and a peroxide decomposition catalyst, packaged separately and combined like an epoxy at the time of use to deliver these benefits. This rather awkward delivery method leaves an opportunity in the skin-care market for an easier way to apply an oxygen-rich lotion.

That’s addressed in this invention from Kimberly-Clark Worldwide Inc., Neenah, WI, that proposes using a novel dispensing bottle that delivers an oxygen-rich lotion at the point of use. One embodiment is for a single-reservoir dispensing bottle that contains a peroxide-rich liquid. The bottle has an outlet within which is a peroxide decomposition catalyst immobilized on a substrate, so that the peroxide-rich liquid and immobilized catalyst come in contact with each other just as the liquid is dispensed from the bottle.

The catalyst is contained on or supported by a substrate that has an open structure to allow the peroxide-rich liquid to flow through it and maintain good contact with the catalyst. The substrate may be a mesh, foam, woven or non­woven material, or other suitable porous material. The patent identifies several catalysts including sodium carbonate.

For more information, see the document at Fresh Patents.

The Asian influence and digital mutation in cosmetics packaging
Jul 17, 2018

Ergonomic mascara brush contorts so user doesn’t have to
Oct 02, 2017

Dior pumps up the volume with new mascara package
Jul 31, 2017