Cups and Other Coffee Packaging Hard on Environment, Says Study 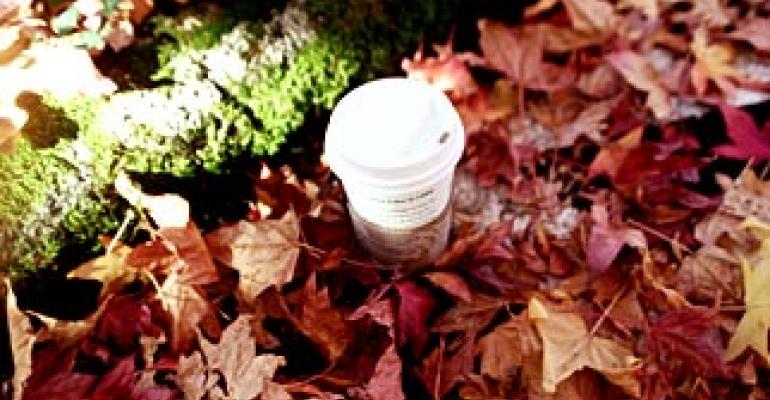 Americans are going green but when it comes to coffee, they’re still in the dark. According to a new, independent survey by Kelton Research commissioned by Good Earth Coffee, 67% of consumers who frequent coffee shops admit to discarding their used paper cups into a regular trash can -- and not into a recycling bin. That’s 28 billion cups (100 million pounds of paper) every year that end up in landfills.

Despite all the wasted paper cups, the “Brew for the Better” study revealed that many coffee drinkers do have environmental concerns when it comes to their favorite drink. More than 40% of coffee drinkers report they are paying more attention to the way their coffee is grown and harvested than they did five years ago.

In addition, the National Coffee Association says that 51% of coffee consumers are aware of the Organic certification for coffee. What's more, up to 30% would even pay extra for organic coffee or coffee that came in an eco-friendly container.

Americans are also seeking meaningful ways to save money in a tough economy, and looking at what they’re spending for coffee is no exception. The high price of a coffee shop beverage is an issue for many Americans. In fact, over four in ten Americans who have left a coffee shop without making a purchase did so because the coffee was too expensive.

The survey also shows that Americans may need more education about the environmental impact of their coffee shop visits. Some 42% of Americans falsely believe it takes less time for a paper cup to decompose (20 years) than a newspaper (2 weeks). What’s more, the vast majority of paper coffee cups can not be recycled or composted because the cup is coated with a thin plastic layer of unrecyclable material.

To help inspire coffee drinkers to make this change, Good Earth Coffee will donate $1.00 for each online pledge they receive to The Trust for Public Land, a national nonprofit environmental organization. Consumers can go to www.goodearthcoffee.com to make their pledge. Good Earth Coffee hopes to quickly reach its donation goal of $20,000 to help The Trust for Public Land to conserve landscapes, parks, gardens, and natural areas for Americans to enjoy.

Sophie Uliano, Good Earth Coffee spokeswoman and bestselling author of Gorgeously Green, understands the importance of brewing at home. “If every American brewed their coffee at home, the positive impact on the environment and our wallets would be colossal,” she says. “Taking the Good Earth Coffee ‘Brew at Home’ Pledge is a simple first step any coffee lover can take to make a genuine difference.”


Other Interesting Findings in the Coffee Study:

Cell Shock: Half of coffee drinkers would rather give up their cell phone for a week than their favorite drink.

Daily Grind: Research reveals that roughly half of Internet users are now ‘hooked’ on email and check it more that 4 times a day, but 43% of coffee drinkers would rather go offline for a day than miss their morning cup.

Better than Candy: More than half of Americans report it would be harder to forego coffee than sweets.

Sorry Sweetie: Over one quarter admit a cup of coffee is a better way to kick off the day than a kiss from their loved one or family member.

Java Love: One in five would rather have a cup of coffee as their travel companion than a significant other.

The official “Brew for the Better” study was conducted in August 2008 and involved 1,007 nationally representative Americans age 18 and older who have Internet access. The survey results indicate a margin of error of +/- 3.1 percent at a 95 percent confidence level.