"Because of its strong, growing middle class, the entire region is a considerable market for products that use adhesives and sealants, including packaging, construction and transportation," notes Matt Croson, president of ASC. "Outside of Japan, which continues to feel the impact of the earthquake and tsunami, we expect all of the market to expand and increase the use of innovative adhesive and sealant products over the next three years."

"Even with some market drivers having a negative impact in the short term, the strong consumer demand and growing population will make this region a strong player in the years ahead."

The Asia Pacific market share for adhesives and sealants is provided in the following figure: 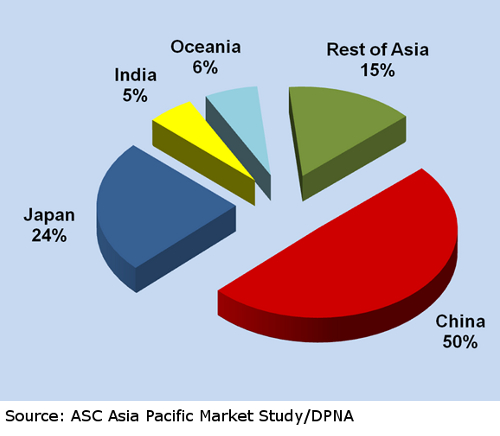 The market study contains 91 pages of 189 Tables and Figures, which provide market data by end use market segment, technologies and product categories as defined in the Harmonized Definitions for Adhesives and Sealants approved and adapted in 2008 by the U.S. Adhesive and Sealant Council and FEICA (Federation of European Industries Colles (Glue) and Adhesives). These Definitions are consistent with the ASC 2010-2013 North America Market Study with a Global Overview released in late May 2011 and the coming FEICA European Market Study due to be published in late summer 2011.

Data was obtained by DPNA Intl. from direct interviews with adhesive and sealant manufacturers, industry associations, suppliers to the industry, and end users in addition to government and financial sources and DPNA's ongoing updated database.

The ASC 2010-2013 Asia Pacific Report and North American Market Report are produced by the ASC in partnership with DPNA Intl., a leading market analyst and research firm that is also an affiliate member of the Council. The data within the reports was collected using primary research and market reports from a variety of sources and in collaboration with several trade organizations. The definitions used within the reports are harmonized with the global adhesive and sealant community.

For additional information and to order the report, click here.