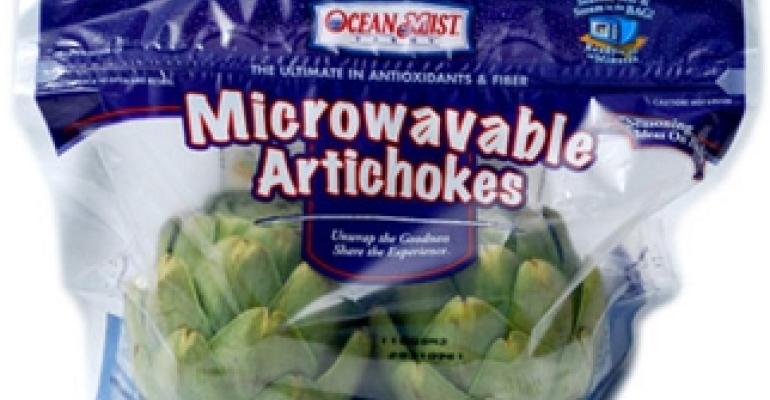 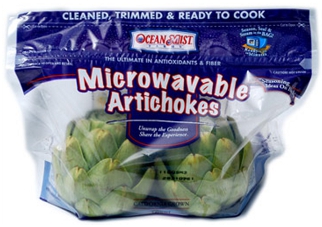 Ocean Mist Farms new "Season & Steam" microwavable artichoke bag features two, fresh artichokes that are cleaned, trimmed and ready to cook. The packaging gives users the option to open the bag, pre-season the artichokes to their preference, reseal the package and steam by microwave—all within the same bag.

The bag, which was in test market at retail stores in northern California last fall, is now more widely available at grocery stores.

"Consumer research told us that many shoppers view prepping of artichokes as the major barrier to purchase. By doing the prep work, we make eating fresh artichokes easy and convenient," says Kori Tuggle, director of marketing and business development.

The ability to pre-season the artichokes (prior to cooking) is an exclusive convenience attribute to the produce department. The Season & Steam" microwavable artichoke bag was a finalist in the PMA's annual innovation in packaging awards competition.

Ocean Mist Farms was one of five fresh produce companies named a packaging innovator by the Produce Marketing Assn. (PMA) in its fourth annual Impact Awards (October 2011). The award recognizes companies with exceptional produce packaging that demonstrates "out-of-the-box-thinking" and makes an impact on consumers.