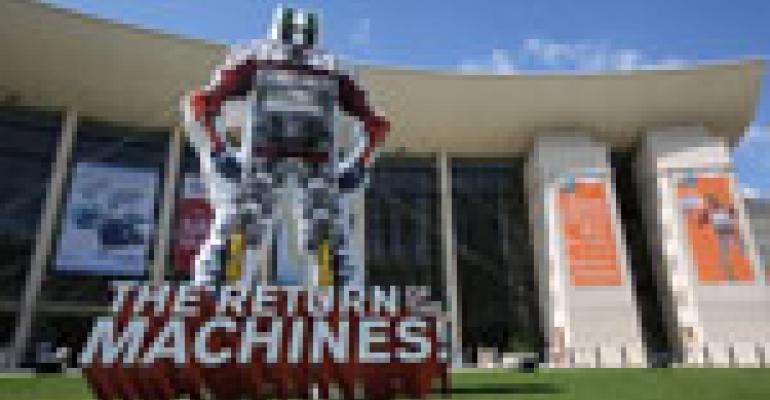 A new era in NPE history began this week as the giant NPE2012 international plastics exposition opens in the first new venue for NPE in 40 years, bringing an innovative agenda, an influx of new exhibitors and attendees, and an upsurge in size and dynamism, it was announced by SPI: The Plastics Industry Trade Association.

new benefits for exhibitors and visitors," said William R. (Bill) Carteaux, president and CEO of SPI, which produces the triennial NPE. "Three years of work by SPI and the NPE Committee has given the industry an NPE2012 that not only substantially surpasses the recession-era NPE2009 in size and scope but is in line with the greatest NPE successes of the past."

NPE2012 has many innovations besides the new venue. "Super Sunday" on April 1 is one example-it consists of twelve hours of networking opportunities, industry forums, and celebratory events on the day before the start of the NPE trade show on Monday. Super Sunday culminates in an industry gala and banquet that includes a keynote address by former U.S. ambassador, Utah state governor, and presidential candidate Jon Huntsman, Jr., a celebration of SPI's 75th anniversary, the induction of ten new living members of the Plastics Hall of Fame, and awards to industry leaders by the Society of Plastics Engineers (SPE).

NPE2012 Is Larger and More Diversified than Recent NPEs

More than 1,900 companies are exhibiting at NPE2012, well over the totals in 2006 and 2009. NPE2012 exhibitors have taken 920,000 sq.ft. (85,500 sq.m) of exhibit space, 20% more than was occupied in 2009. Companies coming directly from outside the United States account for 40% of the total exhibitor count in 2012, a substantial increase from the one-third share for recent NPEs. Approximately 41% of these international exhibitors come from China-by far the largest contingent from that country at any NPE. Attendee registrations in 2012 are 30% greater than in 2009. International registrations account for 25% of the total, and fully half of them are from Latin America, attesting to the advantages of the Orlando venue for travelers from Mexico and Central and South America.

"NPE2012 has attracted many new first-time exhibitors and visitors, not just from other countries but from manufacturing companies in the southeastern U.S. that are within easy reach of Orlando," said Gene Sanders, SPI senior vice president of trade shows and conferences. "At the same time, the economic advantages of Orlando, combined with recovery in the U.S. economy, have ensured the return of our longtime exhibitors and visitors, including those that didn't come to NPE2009 because of the Great Recession."

‘The Return of the Machines'

Visitors to the NPE2012 trade show will immediately be aware of the sheer dynamism of the exhibit floor, as plastics processing machines are demonstrated in full-scale operation, manufacturing film, sheet, bottles, and injection-molded parts. Described by SPI as "The Return of the Machines," the upsurge in the number of equipment systems that suppliers have brought to the show is attributable to the recovering economy and the cost savings and streamlined logistics available to exhibitors in the new Orlando venue. Among the most elaborate equipment demonstrations are those of complete production cells-in effect, turnkey plastics processing plants that incorporate parts handling, decoration, assembly, and other functions.

Among machinery exhibitors there is widespread emphasis on energy efficiency, increased productivity, and scrap reduction. Specialized technologies include micro-molding, multi-material processing, and in-mold labeling and assembly. Systems for producing medical devices, automotive components, and high-volume packaging are also prominent at the show.

Along with the "return of the machines," the overarching theme of the NPE2012 show may well be advances in technology for bioplastics. Dozens of exhibitors are involved, ranging from manufacturers of new bio-based resins, compounds, and additives to equipment suppliers

that have developed systems specifically for processing these materials. Sessions of all three educational programs co-located with the show will also focus on bioplastics.

Bioplastics suppliers aside, material companies are plentiful at NPE2012, noted SPI's Gene Sanders. "There is more participation by resin manufacturers than we've seen in the last four or five NPEs, as these companies exhibit, host customer service centers, or sponsor special-interest initiatives such as our design competition."

While introductions of thermoplastic elastomers (TPEs) are especially prominent at NPE2012, there is a wealth of other new resins, compounds, and additives on the exhibit floor. Sustainability is a key theme among material suppliers, which have developed numerous formulations aimed at reducing the carbon footprint of end products, cutting back on the material content of packaging, light-weighting parts to reduce fuel consumption in shipping or in automotive applications, enhancing recyclability, or facilitating development of alternate energy systems such as photovoltaic, wind turbine, or film-battery applications.

SPI has set aside a substantial segment of the exhibit floor for "Technology Central," a showplace for cutting-edge technologies, specialized industry sectors, and advances in design. Included are these multi-exhibitor pavilions, programs, and displays:

● Technology Theater in Booth 3909 will offer pre-scheduled half-hour presentations by exhibiting companies through all four days of the expo.

● International Plastics Design Competition (IPDC) in Booth 21062 will display all 32 components and end products entered into the competition. Awards will be presented in various categories, among them a "People's Choice" award resulting from voting that is open to anyone in the industry. Voting is available at the IPDC display as well as online at www.plasticsdesign.org. Awards will be presented during NPE2012 on Tuesday evening.

NPE2012 will take place Sunday through Thursday, April 1-5, 2012, at the Orange County Convention Center in Orlando, Florida. The exposition halls will be open April 2-5. A complete schedule of events can be found online at www.npe.org. NPE is solely owned and produced by the SPI: The Plastics Industry Trade Association.