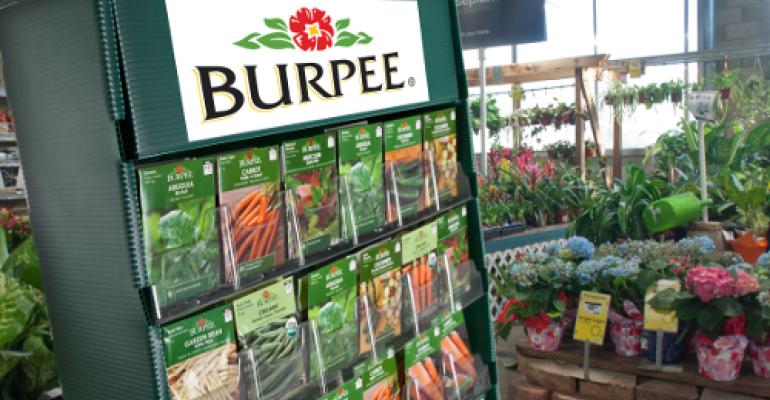 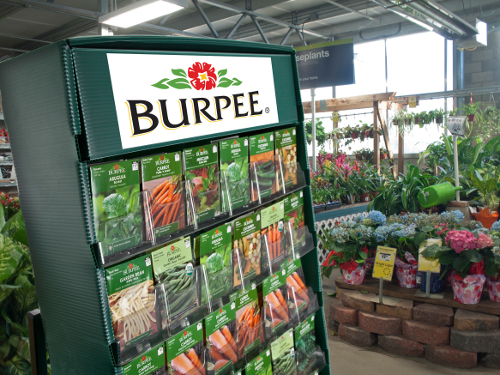 Burpee—one of the country's biggest garden-seed companies—has multiple accounts with garden centers operated by such customers as Lowes and Home Depot, where its floor-standing retail display was being used only indoors at the stores.

"A customer asked if we could provide an outdoor floor-standing retail display for our seed envelopes to go outside in the Garden Center," says Burpee's Mike Wooters, purchasing manager for retail components and general merchandising. "This meant developing a waterproof pusher tray that would retrofit into the outer display panel already in use."

Seed packets are poly-coated for water resistance but the entire display wasn't designed for wet environments. The outer panel holds trays of seed packets, which are four to six pockets across. Previously, the seed packets had been pushed—or advanced—forward by an injection-molded, metal coil-spring "pusher" or "anvil" so that there is always a packet front-and-center as customers take product from the tray. Although the outer panel was waterproof, the pusher tray with its metal coil-spring never needed to be until Burpee received the request. And, since metal will rust when exposed to outdoor elements such as precipitation and water hoses, any new design would have to be inherently weather-proof or metal-free.

But Wooters also wanted the new waterproof pusher tray to address another concern of an outdoor display: Keeping the lightweight package secure. The previous injection-molded pusher left a 1/4- to 1/2-in. space in the pocket-front. In the Garden Center area, the last one or two seed packets could be blown out by wind, lost to customer view, possibly affecting sales. "We wanted a pusher-tray design that would hold our 1-oz envelopes in tight and keep seed packets from blowing away in the wind," Wooters says.

So in spring 2010, Burpee searched for a thermoformer who could design a retrofitted waterproof pusher-display tray and found Package Development Co. "We visited our customers to get a directive and then talked to a few different thermoforming companies," Wooter says. "Package Development had the best fit and design. Their prototype was original, so we partnered with them." 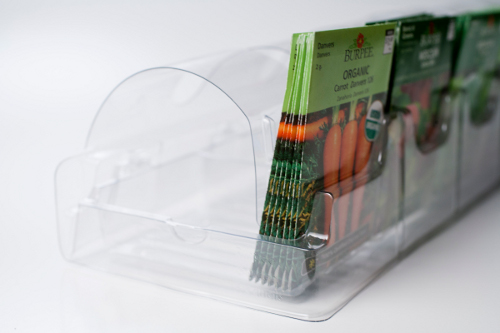 Design breaks new ground
"We call it a ‘Retail Articulating Pusher Display,'" says Package Development president Charles (Skip) Schwester. "We have an active R&D department, which had already developed a pusher (or anvil) design that we thought could work for Burpee's application. It took two or three more versions before we had a working pusher tray. But with our first concept, we were sufficiently on-track to solve the problem so that Burpee supported and encouraged us to continue."

Prior to this, Burpee and Package Development had never worked together. But the collaboration proved fruitful. "Burpee was the inspiration for the Retail Articulating Pusher Display," says Schwester. "They had valuable input. Both companies share the patent that's now pending, and there are many new patent-pending design modifications in the works."

The ingenuity of the pusher-tray design stems from its being die-cut and vacuum-formed from one contiguous piece of Pentaform recycled polyethylene terephthalate (rPET) rigid film supplied by Klöckner Pentaplast. "RPET is reusable," says Klöckner Pentaplast's business manager for thermoforming films, Peter Gianniny. "And it can be streamed back into the recycling loop under the right waste-management conditions."

Wooters applauds the choice. "The clarity, functionality and quality of the Retail Articulating Pusher Display is working fine. No complaints," Wooters says. "Clarity is important because our seed packets are printed in bright four-colors—meant to grab retail customers. They need a good view. It helps in forming purchasing decisions. And the clarity of Klöckner Pentaplast's film is high quality."

Solving a perennial challenge
A floor-standing retail display that leans back and pushes product forward is not new. But the typical injection-molded design has always been expensive because it is comprised of three separate parts, including a metal coil-spring. Not only is tooling expensive, injection molding is time-consuming to manufacture and therefore low volume. (On the other hand...Burpee still uses the original injection-molded design for indoor retail display panels due to its durability.)

Part of the challenge was keeping the same panel structure and having it work with the redesigned tray that accommodates various display iterations. The display panels can be up to 5-ft tall, and may contain from four to 12 vertical rows of trays. Much also depends on the type of seed. For example, pumpkin seeds might fill out the bottom of a packet to a quarter-of-an-inch, while celery seeds are practically flat, necessitating varying tray depths. And width-wise, trays need to be four-, five- or six-pockets wide. "Package Development's design allows us to tailor the Retail Articulating Pusher Display to each account. In fact, we have added more sizes for the 2012 gardening season," Wooters says.

An upstanding design
With brilliant simplicity and a little physics—what Schwester describes as "almost an epiphany"—Package Development formed a design that solves both of Burpee's concerns by die-cutting a "T" at the head of each long pusher-arm. There are four or six pusher-arms on an extension off the main tray. The "T" slots into a cut-away groove centered in the middle of each pocket. Schwester says, "It takes a fast 15 seconds to hinge and snap-lock the pusher-arm extension to the main-tray backside and u-bend the four or six pusher-arms in place, slotting the ‘T.' It's practically simultaneous."

On both sides of the "T" slot are thermoformed flutes to prevent bottom sagging or bowing when loaded. These flutes also help maintain spacing of the necessary 5-in. clearance between trays. The die-cut front tray wall (double-sided) is further strengthened with flutes at its highest points (5 in.). These flutes act as stiffening ribs that help prevent deflection. The wall in front of each pocket is only 3-in. high for easy reach-in access, accommodating standard seed-packet dimensions: 4-1/2-in. high x 3-1/4-in. wide.

Wooters says, "It is a fine line for the front wall to be high enough to hold packets in place while also making them able to be pulled out. That's also the reason there are 5-in. of head-space between pusher trays."

The pusher-arm itself supports the seed packets vertically with the help of four flutes near the "T," providing a flat surface with which to advance them. Advancement takes place because the plastic pusher-arm is pulled back when the pocket is filled, but wants to push forward. The "T" slides up as product is depleted. In effect, the bottom of the pusher-arm acts as a coil that creates energy, performing like a spring.

Displays assembled manually
Burpee manually assembles each Retail Articulating Pusher Display at its Pennsylvania facility, scoring a right-angle bend in the pusher-arm to further help vertically support seed packets, which are themselves hand-filled into pockets.

The pre-loaded Retail Articulating Pusher Display went into usage at outdoor garden centers in February 2011, the start of gardening season. In the end, Package Development also re-engineered the plastic corrugated outer display using the same footprint. They used a process of concurrent engineering on the patented pusher display and outer display to assure both would work well in concert. For example, thumb recesses thermoformed into either side of the tray for easy placement inside the display are then secured with folding side-flaps that are keyed into the display.
Burpee buys the outer plastic corrugated displays from a paper corrugated supplier who brokers the panel through a plastic vendor. 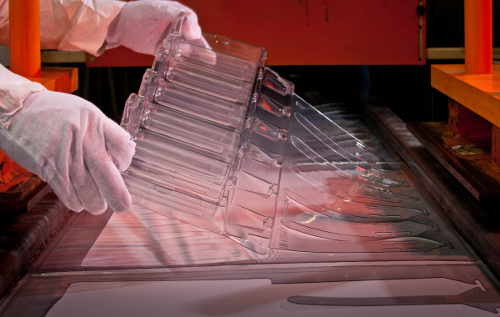 Quality savings
"The simplicity of the design relies on the quality of Pentaform rigid plastic film we specified from Klöckner Pentaplast," Schwester says. "We chose them as our supplier because we know from experience that their gauge tolerance will hold. Klöckner Pentaplast quality allows us to use a thinner gauge—which reduces material costs. Even at 30-thousands-of-an-inch, the formability of their film is more forgiving and its cut-ability reliable."

Not only does the innovative one-piece Retail Articulating Pusher Display save on production costs—materials, tooling, time, labor—it reduces shipping costs as well.

Unlike injection-molded product pusher displays that ship fully assembled and are limited to a small number per shipper carton, Package Development's design allows for each display to nest together like drinking cups.

Depending on the size and design, hundreds of displays can be packed per shipper. According to Schwester, this saves hundreds if not thousands of dollars in shipping cartons, freight and warehousing-with the much welcome benefit of reducing transportation greenhouse gases. 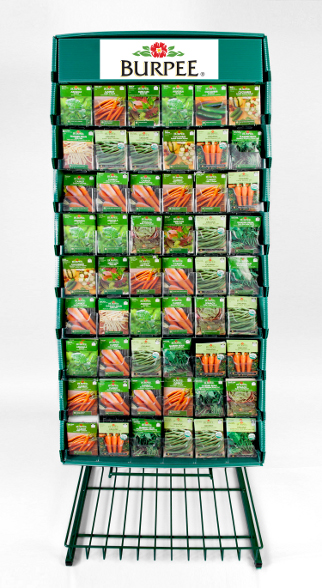 No rain on this parade
As for wet conditions found at an outdoor garden center, a vent allows water to run down the back of the Retail Articulating Pusher Display and exit out the flat bottom. The pusher-arms actually lean back in a cradle, which acts as a drain. "Package Development's design exceeded our expectations by leaps and bounds," Wooters says. "We thought of this project as a new adventure, and they had the capabilities and qualities to make a more efficient floor display."

Package Development continues to strengthen and adapt its Retail Articulating Pusher Display for Burpee, as well as for heavier potential applications such as candy bars, pharmaceuticals, cold remedies, liquid powders, fragrances or cosmetics. As the company builds its own specialty equipment and custom machinery, there is no stopping its push to get the Retail Articulating Pusher Display into mass merchandising.

"Just think," Schwester says, "a pre-loaded pusher-display panel could save retail stores hours of labor in stocking and restocking. And it could help manufacturers keep their products in full view of customers at all times."