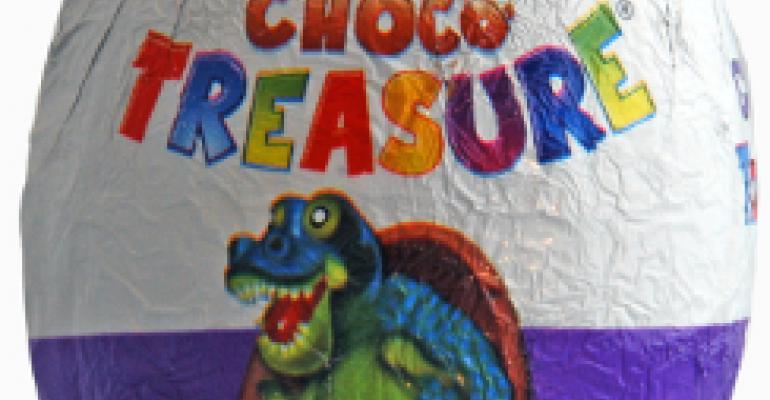 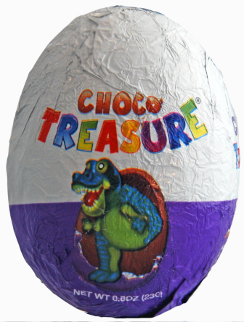 One of the lesser-known tasks for U.S. Customs officials is confiscating chocolate "surprise eggs" from travelers. More than 60,000 surprise eggs are seized at the U.S. border each year with penalties up to $2,500 per egg. Brands such as Kinder Surprise and Ovetto Sweet, which contain toys inside a hollow chocolate egg, are the top selling kids' candy around the world. Over a billion surprise chocolate eggs are sold worldwide each year but have been illegal in the U.S. due to the 1938 Food, Drug and Cosmetic Act which prohibits inedible objects inside a candy.

The absence of this global favorite treat in the U.S. has just changed. To meet the FDA regulation, the design team at Candy Treasure created a capsule with a ridge that circles the capsule equator and keeps the two chocolate egg halves from touching, meeting the FDA's requirement that the capsule not be "imbedded" in the chocolate.

However, the ridge, which extends slightly beyond the chocolate, created a last minute packaging crisis-its corners sometimes ripped the thin aluminum foil wrap. Laurence Molloy, co-founder of Candy Treasure says, "Retailers clearly aren't ok with two or three eggs in every dozen having a rip in the foil. We needed to solve that problem - fast." A last minute frantic design change to the molds rounded the ridge so it has no corners or edges, and doesn't poke through the foil.

"Finding a way to bring the biggest kids' candy concept in the world to the USA was a huge design challenge. We tried dozens of different designs and the best turned out to be the most classic," adds Candy Treasure co-founder Kevin Gass. "The rounded ridge is basically tubular arch. It separates the chocolate halves and doesn't puncture the foil."

There are several different editions of Choco Treasure on the slate, each with its own collection of toys. The 2013 season will feature the original chocolate eggs, Christmas ornaments, Jack o' Lanterns, sports balls (baseballs, footballs and soccer balls), and a Spider-man edition, licensed from Marvel.

The Christmas ornaments feature another unique design element in the capsule-an extended bump on the ridge with a small hole for a Christmas ornament hook- enabling Choco Treasure to be a 3-in-1 Christmas candy: Hangable ornament, toy surprise and milk chocolate treat.