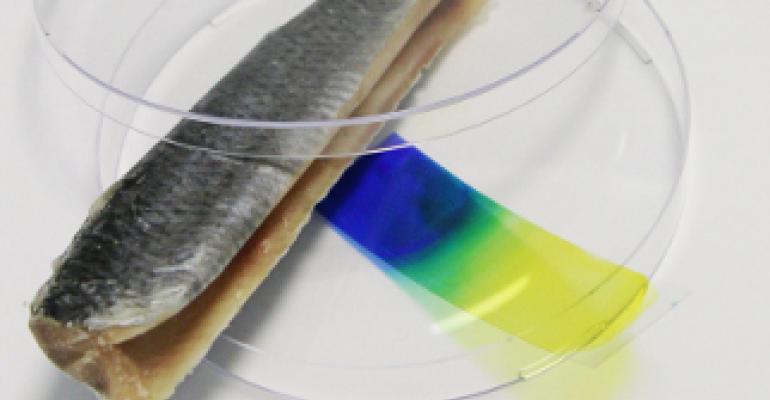 The sensor film changes color, from yellow to blue. Proof positive that this fish is spoiled. (© Fraunhofer EMFT) 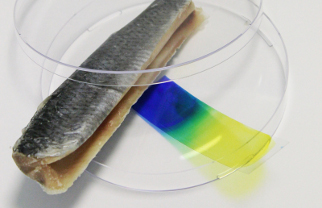 When it comes to packaged fish or meat, it is nearly impossible to distinguish between fresh goods and their inedible counterparts. Researchers have now developed a sensor film that can be integrated into the package itself, where it takes over the role of quality control. And if the food has spoiled, it changes color to announce the fact.

Is the vacuum-packed chicken leg really still fresh and edible? Looks alone do not tell the whole story. And the "best-before" date is no guarantee, either. Scandals involving the sale of rotten meat have added to the uncertainty, and the customer him- or herself may be shortening the shelf life through improper storage. This is an area in which a sensor film developed by the Fraunhofer Research Institution for Modular Solid State Technologies EMFT in Munich can immediately give a green—or rather yellow—light to warn of spoiled goods. EMFT developed the film in a project sponsored by the German Federal Ministry of Education and Research.

The sensor film is integrated into the inside of the packaging, where it responds to biogenic amines. Amines are molecules produced when foods—fish and meat foremost among them—decay. They are also responsible for their unpleasant smell. If amines are released into the air within the packaging, the indicator dye on the sensor film reacts with them and changes its color from yellow to blue.

"Once a certain concentration range is reached, the color change is clearly visible and assumes the task of warning the consumer," explains Dr. Anna Hezinger, a scientist at EMFT. This is not only interesting when it comes to identifying foods that have become inedible. Many people are also extremely sensitive to the presence of certain amines. Which makes a warning all the more important for them.

"Unlike the expiration date, the information on the sensor film is not based on an estimate but on an actual control of the food itself," Hezinger emphasizes. At the same time, the system is very inexpensive. This is important if it is to be used on a broad scale. Other solutions—such as electronic sensors, for instance—would lead to a steep increase in the price of packaged meat. Things that come in direct contact with food products must also meet high standards.

"Food safety is ensured by a barrier layer between the sensor film and the product itself. This barrier is only permeable to gaseous amines. The indicator chemicals cannot pass through," Hezinger explains.

Scientists are also working on a measurement module with a built-in sensor film. Employees in the food and packaging industries can use the module to test the freshness of food products directly. The device objectively analyses the color response while at the same time providing a more precise result than is possible with the human eye. This also permits an exact identification of intermediate shades of color. Hezinger and her team are currently looking for partners in industry with which to further develop and produce the sensor film and measurement module.