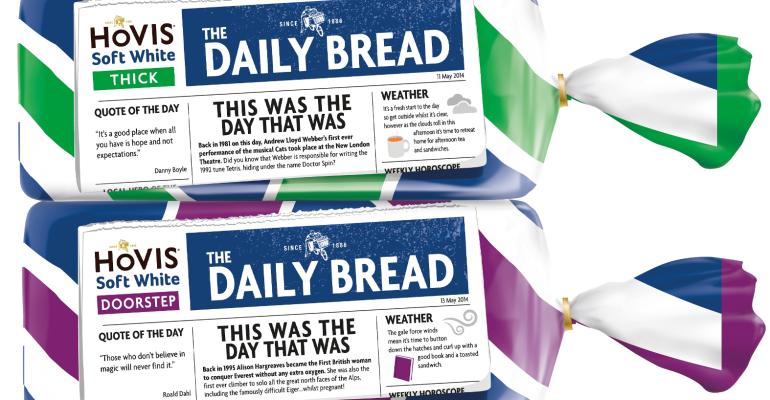 The prototype, a digitally printed package for Hovis bread, was designed to “be quite quirky because Hovis is kind of a quintessentially British bread,” says Silas Amos of design firm JKR. “It’s using an abstracted Union Jack with different colors on it."

Coca-Cola’s campaign in 2013 of printing popular names on soda-bottle labels showed the power of digital printing for brand marketing.

New developments announced at the mid-May interpack show in Dusseldorf, Germany, continue to advance the applications for mass-customization packaging, and make it easier for brand owners to implement personalization on their packaging line.

How important is this? According to Bob Miller, vp, sales, PTIS (Packaging Technology Integrated Solutions), a division of HAVI Global Solutions, “It’s less about the consumer being conscious of the fact that the package was digitally printed, and more the fact that it’s customized or personalized for them.”

This is a subtle shift of thinking for the brand owner. Miller explains, “We did a lot of work with digital over the last 10 years. So many companies were approaching it as a replacement for long runs. You have to look at it as a different objective here. If you’re just going to create millions of the same image, digital doesn’t make sense. But if you do want to go to that customized aspect—where you are able to do that one-to-one personalization—that’s where it’s starting to come into play for the consumer and the brand owner.”

Silas Amos, creative strategy at package design firm JKR, agrees. “The short runs and agility and ability to keep flexing the same design with infinite interpretations of it—these are big opportunities for packaging design generally. There’s the opportunity to be geo specific with an international brand; to do infinite varieties of the same design, which can appeal from a one-off perspective; to do bold, quirky things, which typically a national brand wouldn’t necessarily do because they’ve been scared to experiment,” Amos says. “The short-run of digital can allow them to be bolder and braver and experimental, and see what works in live tests and then roll those things out.”

A prime example of this is a prototype package—presented by HP and JKR at interpack—that was developed for Hovis, one of the three biggest bread brands in the U.K. “We came to them with the idea of something like a folded up newspaper, which would go on the face of their bag,” Amos says. “It’s the sort of thing that, as a consumer, you might feel like reading for the two minutes that your bread is in the toaster toasting.”

The designs include the weather forecast, news from this day in British history, quotes from beloved Brits and sporting trivia.

“What we were trying to really do with this was, for our own selfish ends to some degree, prove that packaging could be topical—because we think that’s a big opportunity for the industry,” Amos says. “What we’re trying to do is lead the industry, as well as do a good job for Hovis. We wanted this to be an exemplar of the opportunity of topicality.”

The packages were printed by U.K. flexible packaging converter Ultimate Packaging on an HP Indigo WS6600 system using film that closely matches the regular substrate. The prototypes were then mocked up by hand, filled with bread loaves and hand sealed.

The bread bags are wider than the width of the film the digital printer can handle, so moving this beyond the prototype/concept stage for the bread line isn’t feasible—but doing it for other Hovis products sold in smaller bags is certainly possible and under consideration. (The project was just implemented several weeks before the interpack show.)

The current production limitation doesn’t faze JKR. Lynn Harris, JKR account director-digital says, “By doing these things that aren’t quite possible yet, HP says that, if there aren’t enough substrates that are too wide, they will respond by coming out with a wider machine if there is enough demand.”

Amos adds, “We want to continue pioneering with HP on opportunities, both creatively and technically. Specifically to Hovis, we’re going to look at different formats and substrates. We’re keen to turn the prototype into reality. Kind of like a concept car at an auto show. The bigger picture is we want to keep creatively collaborating with our clients and HP to keep trying this stuff out. Watch this space. There is definitely work afoot.”

Managing dynamic or variable data throughout the packaging development and production process has been made a bit easier due to a partnership, also announced at interpack, between Esko—well known and used for its packaging design software products—and sister coding/marking company Videojet Technologies (both are owned by Danaher). The collaboration allows packagers, using Esko software, to design a package with sections that have variable elements and then print those elements on the package at the last moment on the packaging line using a Videojet overprinter. According to the companies, “This management of print postponement is dramatically simplified and, above all, conducted in a way that allows for a zero-error environment.”

What other digital printing developments are still down the road? When asked if HP was working on any technologies—or perhaps even applications—to incorporate digital printing with 3D printing so companies can make and decorate prototypes in a single step, Stephen Nigro, svp, HP inkjet and graphics businesses, says, “The short answer is yes.”