Imaging group is on a roll with 'green' printer 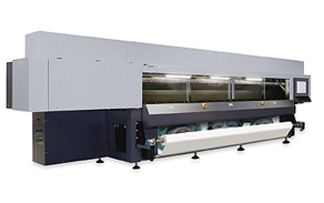 Toronto's SCL Imaging Group is furthering its pursuit of a “green” operating model, while enhancing productivity, with the installation of the new Rho 351R roll-to-roll UV ink-jet printer from Durst Image Technology U.S., LLC (www.durstus.com). Claiming to be the first printing company in North America to install the new super-wide printer, SCL, founded in 1982, prides itself as being a pioneer in color management, and a company that invests in the latest and most innovative imaging technologies.

Some of Canada's largest retail, sports and entertainment enterprises, as well as exhibits, advertising, finance, public transportation and government concerns turn to SCL Imaging Group for their large-format printing needs, it says.

Considered a leading large-format digital printer in Canada, SCL Imaging Group enjoys a reputation as a pioneer in color management services specializing in printing, finishing and distribution to satisfy a wide variety of retail and commercial customers. It has an aggressive “green” business strategy that emphasizes environmental responsibility throughout its operations. The company likes the fact that the 351R uses VOC-free inks and can print on recycled/recyclable roll materials. According to Durst, the versatile 11.5-ft-W Rho 351R can feed two 63-in.-W rolls of media at the same time.

This is helpful to the imaging group, which employs more than 50 people in a modern 33,000-sq-ft plant in Toronto. Peter Spring, SCL Imaging Group's vp and general manager, says the capabilities of the Rho 351R permit SCL Imaging Group to make good on its environmental commitment and add super-wide roll products to its array of offerings. It also benefits from the workflow and output productivity that the Rho printer provides.

“This [recent] acquisition was a business decision that has a lot of advantages for us, for our customers and for the environment,” notes Spring. “The Rho 351R allows us to get into a new market—wide-format roll media—and to diversify our offerings in an environmentally responsible way. Our clients are looking for variety and we were looking for a productivity opportunity. Eventually, solvent inks will have to go away. So we think we've made a smart, long-term decision that makes SCL Imaging Group a better company with which to do business.”

A variation of Durst's flagship Rho 350R wide-format printer (which prints coated and uncoated substrates up to 11.6 ft wide), the 351R was introduced in June 2007 at the Federation of European Screen Printers Association (FESPA) tradeshow in Berlin. Described as a wider, high-speed UV ink-jet printer that lays down quality images at 600 dpi on paper, fabric, vinyl, vinyl films and other types of roll media, the 351R, according to Durst, has the ability to meet robust environmental standards at print speeds up to 1,830 sq ft/hr on selected roll media.

T he system prints on recycled and recyclable roll materials, a requirement that SLC Imaging Group says is showing up on more customer checklists, and the inks comply with stringent European Council Directive 1999/13/EC. Durst reports that the inks contain no solvent carriers used as viscosity agents and instead use what Durst calls different, “environmentally friendly ingredients.” Utilizing the width of its 11.5-ft-wide printbed, the Rho 351R system can simultaneously print on two 63-in.-wide rolls of different material in different diameters. A “stepless” skip-white function in the XY direction enhances printing even further, along with an integral, manual cutting device and user-friendly operating software. It's able to print double sides with laser-driven registration and can imprint text in crisp type as small as 4-pt. Solid areas exhibit high color gamut and density.

This is made possible by the Quadro™ Array printhead technology, sophisticated mechanical engineering and proprietary image software, Durst says.

“Now, customers can turn to us to meet more of their image requirements, knowing that the impact on the environment is being minimized, thanks to our printing equipment and processes,” says a pleased Spring.