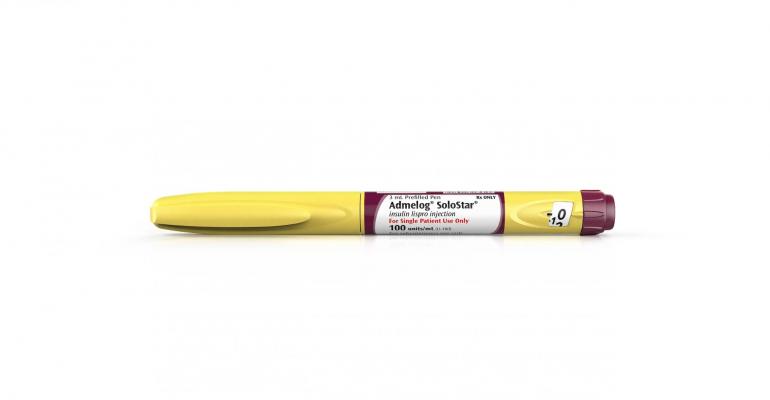 Image of Admelog in the SoloStar pen courtesy of Sanofi

FDA has approved Sanofi's Admelog as “the first follow-on insulin lispro to help people living with diabetes manage blood sugar levels at mealtime,” Sanofi reports in a news release. The product will be supplied in vials and in the SoloStar pen, shown above.

First launched in 2007, SoloStar was recognized with a 2007 GOOD DESIGN Award by the Chicago Athenaeum Museum of Architecture and Design. “The SoloStar pen technology allows accurate dosing and is designed to meet with patient’s needs,” Florio explains. “It takes into account the recommendations of doctors and other experts in diabetes care.

"Since production began in 2007, more than one billion SoloStar pens have left the Sanofi site in Frankfurt, Germany, helping millions of people worldwide to support their diabetes treatment," he adds. "The SoloStar technology is the most frequently used disposable insulin injection pen technology in the world."

Admelog was also granted marketing authorization as a biosimilar, under the proprietary name, Insulin lispro Sanofi, by the European Commission in July 2017, the company reports.

"Sanofi has a deep heritage and broad experience in providing treatments for people living with diabetes. Complementing our existing insulin portfolio, Admelog will offer a more affordable option for those who require control of their blood sugar levels at mealtime," said Stefan Oelrich, Executive Vice President and Head, Global Diabetes and Cardiovascular, Sanofi, in a statement. "The approval of Admelog is an important milestone for Sanofi in our mission to serve patients living with chronic diseases such as diabetes."