The plot thickens for Home Box Office, Inc.'s family funeral parlor television series, "Six Feet Under," with the launch of a cleverly conceived DVD boxed set replicating a gravesite with headstone. Released in mid-November, "Six Feet Under: The Complete Series" DVD gift set from HBO Video is secondarily packaged in a carton produced and printed by New York City-based Ivy Hill, a Cinram co. (www.ivyhill-cinram.com), to look—on the top—like a burial plot, with the six feet of what's under comprising the body of the box.

Relates Nick Ciallelo, vp of creative services at HBO Video, "Our aim is always to provide fans with packaging that creates a strong connection with the shows they know so well." 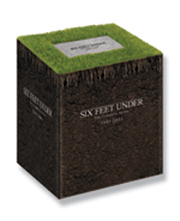 The fittingly designed box holds 25 cased DVD discs that include all five seasons of the darkly comic series, as well as two discs of series soundtracks and a guide that lists "obituaries" for the show's characters. To hold the series' "body of work," the carton is made from .080 chipboard covered with a laminated paperboard stock, both from proprietary suppliers, that is printed by Ivy Hill in four-color offset plus a water-based coating.

SanPan Design (www.sanpandesign.com), also of New York City, designed the box's earth and headstone graphics, which are tastefully overprinted with the ephitaph, "Six Feet Under, The Complete Season, 2001-2005." Surrounding the grey-marbled "headstone" on the top of the box is the pack's crowing glory—faux grass, supplied by a proprietary German manufacturer of grass for model train sets.

"Six Feet Under: The Complete Series" DVD gift set is available for $279.99 through the HBO website, as well as in retail stores nationwide.