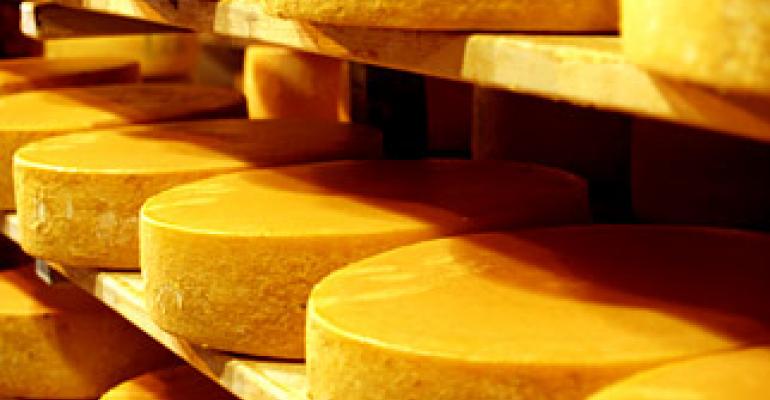 Het Kaasmerk B.V. in, Leiden, the Netherlands, is a manufacturer of assorted blocks of cheese. Kassmerk has been collaborating with Isotron Systems on the traceability and quality control of its cheese for some time. Isotron Systems is the distributor of Cognex vision and identification equipment in the Netherlands. Kassmerk adopted a Cognex DataMan 7500 system to read the codes marked on its individual blocks of cheese. The two-dimensional codes are applied early in the production process and need to be read at the end of production.

The only bar-code identification equipment Kaasmerk could find that was capable of working with the blocks of cheese, despite Kaasmerk's rigorous industrial environment, was the In-Sight Vision System and the DataMan 7500 reader, which are both from Cognex.

Identification codes, such as a 2D code or data matrix, are not only applied to state-of-the-art technology products, they are also applied to food products. These codes are mandatory in Europe, and are also necessary for safeguarding of food quality during production. They help minimize food-safety risks after the production phase, because each end product can be individually traced back to the production lot.

The ability to identify each individual cheese as a unique item in the production chain is an essential component. Actually applied to the cheese block itself, the code functions as a veritable passport. In the past, the codes consisted of regular text, which had many disadvantages. Isotron Systems and Kaasmerk met to discuss jointly introducing the edible 2D dot-matrix codes to cheese producers. The codes were an improvement in the contrast and cell size of the 2D code on cheese marks. This unique code can be paired with essential information input into a computer, such as ingredients, moisture and salt content, dimensions and weight of the cheese. So, if irregularities or mistakes are found, action can be taken immediately.

Information about when and where the cheese is produced and from what ingredients (type of milk, for example) is also included in the code. If mistakes are discovered during the production, distribution or by the customer, the cheese must be withdrawn from the supply chain as quickly as possible. If a specific batch of cheese can't be determined, many batches of cheese would have to be withdrawn as a preventative measure, a real waste of money. Thanks to the unique 2D mark, encoded with all the necessary data, it can be precisely established which batch of cheese might need to be removed from the supply chain.

Not immune to damage

How do you guarantee the reading of a damaged or distorted code?

The cheese mark with the 2D code is applied to the cheese right after the whey is separated from the curds. The code is made from casein (a protein particular to cheese) and is therefore edible. However, this edible code isn't immune to damage, as it undergoes the same treatment as the cheese itself during the production process. Pickling (salt bath) and coating (application of a paraffin or plastic layer) can cause significant damage to the code and it can also become distorted as a result of the puffing up of the cheese.

Jeroen van der Meulen of Isotron Systems explains that certain damage is inflicted purposely during the production process: Customers often demand that the mark is perforated to avoid accumulation of moisture. “With a legibility of less than 90 percent, conventional code readers make checking the 2D cheese codes nearly impossible,” he says.

These production challenges require a powerful production code reader to be able to allow for variances, as well as minimal damage to the codes, and still be able to produce an accurate read.

Codes must be legible

“It's important that the codes remain legible during the entire production process, through the production chain up until the portioning of the cheese. This isn't a given. The legibility isn't achievable with any other system,” points out Jos Putker, managing director of Kaasmerk. “Isotron supplies us with Cognex cameras and accompanying software. We can easily implement that software. We know from experience that the Cognex readers are developed in such a way as to be able to perfectly read the distorted codes, while Cognex software can easily deal with correcting incomplete codes,” says Putker.

Van der Meulen adds, “We opted for the In-Sight ID reader in a water-resistant casing for use in the production area. The casing keeps the camera secure during washdown procedures. The IDMax® software also enables unclear, damaged and distorted codes to be read without difficulty, even during distribution and at the retail level. For the distribution and sales channel, we have deployed the Cognex Dataman 7500 hand-held reader with its unique lightsource, which reads highly irregular codes on young and old cheeses in the field.”

“It's unacceptable for a code to be misread or for a reader to indicate a different code than what's written on the cheese mark,” he says. “This unit is also a good one to guard against counterfeiting,” he concludes.