Aerosol can bundling cleans up

Over a period of about four years (1995 to 1999), Kortman-Intradel, a major European producer of household chemicals and personal care items, has reduced its production locations from 25 to 10 in the interests of further growth and the competitive strength of the business as a whole. This restructuring makes it necessary for each production facility to be a specialist in certain product lines. The unit at St. Truiden, Belgium, is the primary facility for all aerosol products.

Today, some 200 employees in St. Truiden are responsible for a growing number of products, most of which are filled into metal aerosol cans. More than 250 different formulations are mixed and filled at St. Truiden and put on the market in the form of about 1,100 package sizes and pack formations. The factory has transferred some filling and packaging lines to other production locations, and is expecting–in return, as it were–additional production lines for aerosols that have been running at sister factories in Spain and Germany.

Mario Toes, Factory Engineering Manager at St. Truiden, comments: "The restructuring makes it possible for the individual Kortman-Intradal production facilities to achieve optimum operating results. It allows us to concentrate our range maintenance efforts on our core products and the main markets, whether existing or still to be developed."

When Kortman-Intradal needed help with optimizing the end-of-line packaging operation for aerosol cans at its Belgian factory, it was no surprise it turned to MAF Verpackungstechnik, F?rstenau, Germany. Kortman-Intradel has had good experience with machines from MAF for many years at its detergents factory in Nijmegen, Netherlands. With no packaging engineers of its own, the major European company relies for budget reasons alone on the specialist competence of the German machinery supplier. 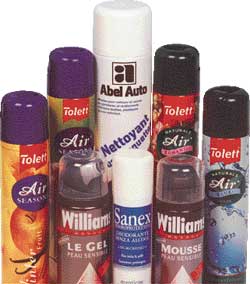 Whether it is a matter of converting existing MAF multipack and end packing machines to handle new individual products or new formations, or designing a complete new packaging line, this is where the MAF team's packaging know-how acquired in the course of over 30 years comes into its own. MAF machines already in use are drop loaders for full corrugated wrapping and bundle packers for multipacks with and without trays enclosed in shrink film.

Kortman-Intradal is particularly proud of the four most recently installed high-speed packing lines, each capable of handling 180 cans per minute. The heart of each line is the MAF tight packer, which takes the metal cans coming from the leak detection station and groups them into formations requested by the trade that permit optimised stacking on Euro pallets.

When a new MAF line is due to be brought into service, the operating personnel are given thorough instruction by MAF technicians, and this is followed up by on-the-job training under production conditions on the packing line itself. Mario Toes considers it important that the trust-based partnership between MAF and his factory enables his team to make use of MAF's specialized packaging know-how as a long-term investment for the benefit of both parties.

High-speed shrink-wrapping line
The aerosol cans arriving at the bundle packer in single file are arranged in four lanes. Once a sufficient quantity of product is waiting to enter the machine, a pusher descends and nudges the first two rows of cans into the U-shaped corrugated tray that is ready in place in the machine. In the case of the 150-ml Sanex deodorant sprays, 2 x 3 cans are grouped into a multipack. The formation of cans on the tray is pushed into a curtain of film, and the sealing bar comes down behind the package and joins the ends of the two rolls of film. The bundle packer at Kortman-Intradel is used as a tight packer, which means that during the banding process, the film is held taut so that the film envelope corresponds exactly to the size of the package. This optimizes the utilization of packaging material.

In many stretch wrapper applications, the tight sleeve of film is sufficient to ensure the stability of the product formation. But Kortman-Intradal prefers a "skin-tight" shrink wrapper. To this end, each banded package passes through a small shrink tunnel before it leaves the MAF packaging line.

In order to have rapid access to the aerosol cans in the warm shrink tunnel in the event of problems, the tunnel can be opened in an instant. The side of the tunnel is simply flapped up along its length,without any need for tools. And it goes without saying that all MAF packaging lines are built to explosion-proof standards.

The two rolls of film that supply a bundle packer or tight packer are stored on an external device separate from the packing unit. A second set of film rolls stands ready for what is virtually a flying splice. It is brought into the operating position as soon as the film on the working unit is used up. The operating panel on a MAF shrink wrapping line is mounted so that the operator can swivel it in almost any direction to keep it handy and in view while performing other tasks.

The shrink-wrapped packs emerging from every MAF packing line are ready for immediate palletizing. They are either placed in the group's regional storage center in the Netherlands within one to two days or are transported by road to sister factories. New aerosol packages leave St. Truiden after a maximum of three days since the available storage capacity does not allow a longer stay.

Kortman's new shrink bundler has helped maintain production despite the company's own shrinking of its facilities.