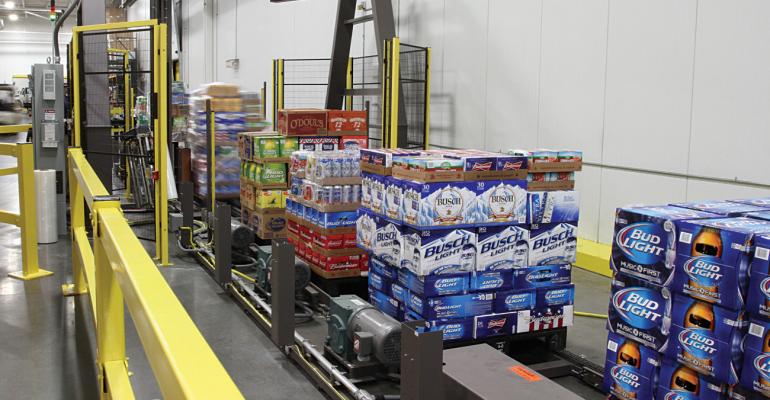 After pallet loads are staged at the infeed, they enter and exit the stretch wrapper automatically.

American Eagle Distributing (AED) is a distributor of beer, spirits and associated beverages to more than 1,100 bars, liquor stores, convenience stores, grocery stores, hotels and restaurants located across the Northern third of Colorado. In its operation, efficient order picking, pallet building and stretch wrapping are essential to maintaining the timely product distribution that supports a strong distributor/customer relationship.

Until recently, the company used a combination of traditional picking and pallet building, forklift trucks and two standalone rotary arm automatic stretch wrappers to build and wrap pallets and load them into its trucks. In 2012, recognizing that its continuing growth was going to require better organization in the warehouse layout and an improved picking strategy, American Eagle contracted with consultant Chet Willey Associates to recommend ways to streamline its operations.

As a result of Willey’s recommendations, in January of 2013 the company rearranged its racking in the warehouse, and in March switched to a voice picking system to speed pallet building. It also replaced a number of forklifts with pallet jacks to move filled pallets from the refrigerated section of its warehouse to the stretch-wrapping operation located in the adjacent loading dock area.

With the greater efficiencies achieved by using voice picking rather than paper orders, pallet building productivity increased dramatically. That, in turn, placed higher demand on the existing stretch wrappers, which could not match the speed of the pallet builders. Pallets were being moved to the wrappers by the pallet jacks, where operators had to leave their jacks to start the wrapper, wait for the wrap to be completed, then remove the pallet and take it either to a waiting truck or to a staging area. The increased speed of pallet building meant that pallets were forced to wait on jacks until one of the wrappers was free.

To eliminate this bottleneck, American Eagle managers began exploring various conveyor/stretch wrapper options that could increase throughput in the wrapping operation and eliminate the waiting time for the pallet jacks. The consultants from Chet Willey suggested that they look at Orion chain conveyors

American Eagle subsequently identified a chain conveyor/stretch wrapper system made by Orion Packaging, a division of Pro Mach. Several of these systems had recently been installed in a large distribution center in Phoenix and, when the management team was attending a convention in Phoenix, they were able to see that system in action.

The Orion system offered a number of features that matched American Eagle’s needs. The LoPro chain conveyor, for example, is a low-profile conveyor, with pallets traveling just 4 inches above the floor. That means that pallet jacks do not have to negotiate ramps to place pallets on the conveyor and remove them after wrapping, which would have been the case with the other conveyor systems that American Eagle had explored. Installing these ramps would have added significantly to the cost of a system, as well as taking up valuable floor space.

“That was one of the big selling points for the Orion conveyor/wrapper system,” says Coby Gentry, American Eagle director of operations. “Another was the high speed of the wrapper itself.”

The stretch wrapper at the heart of the system is the Orion MA-X rotary tower automatic stretch wrapper, which features a 36-rpm rotating arm able to wrap up to 75 pallet loads per hour. At that speed, the new system would be able to outperform the output of the two previous stretch wrappers combined and successfully keep up with the increased productivity of the pallet builders.

Orion designed the LoPro chain conveyor specifically for the fast-paced beverage distribution industry, where pallet jacks are the common method for moving pallet loads. The system installed at American Eagle consists of eight integrated separate sections that can move individually, in combination or as a single conveyor. This gives the system great flexibility in moving pallets into and out of the wrapper, which is located in the center section of the conveyer. In addition to the section where the wrapper is located, the conveyor has four infeed sections and three outfeed sections. This allows the pallet jack operators to place loads on the conveyor and press the system’s start button, which initiates the automatic controls that move pallets into and out of the wrapper.

American Eagle’s pallet jacks bring pallets from the pallet building area of the refrigerated warehouse to the conveyor infeed, which can hold as many as four pallets at a time. Once a pallet has been placed on the infeed conveyor and the start button engaged, the system’s logic moves the waiting loads closer to the wrapper, then individually transfers each pallet into the wrap zone for stretch wrapping. This movement is controlled by an electronic sensor on each conveyor section that “sees” a pallet and signals the chain to move it forward to the next section, where the process is repeated.

In the wrap zone, the Orion MA-X wraps a pallet in less than one minute with film that can prestretch at 260 percent or more, creating a stable, unitized load. After wrapping, the loads are moved to the accumulating conveyor, where lift trucks pick them up for transfer directly into American Eagle’s trucks or to a staging area. Labels that were initially placed on each pallet load by the pallet builder tell the operator which route truck the pallet goes to, and what position it should have in that truck.

The length of the infeed and accumulating conveyors were customized to meet American Eagle’s specific needs and available space. The system design also leaves room for expansion by adding an additional conveyor that would feed the same stretch wrapper.

In the new operational system, the pallet builders move the completed pallets from the refrigerated warehouse to the conveyor infeed, push the start button, and return to build another pallet load. At the exit conveyor end, one man on a forklift moves wrapped pallets to their designated trucks or to a staging area when the designated trucks are not yet available. In the warehouse, there are three pallet builders on forklifts and five on pallet jacks––two less than under the earlier system. One of those builders was moved to the group replenishing the pick area, since the faster picking operation depletes the warehouse stock more quickly than in the past.

The new system was installed in May of 2013, and after trial runs was ready for full-scale operation with no tweaking. With it in place, the bottleneck at the wrapping stage has been eliminated, and the entire operation, from picking through wrapping to shipping moves smoothly, and throughput has been dramatically increased.

“Under the old system,” says Gentry, “our production was at about 270 cases per hour; that rate today is 375 cases per hour. We are very happy with the result.”

Freelancer William Makely has been writing about packaging machinery and materials since 1992. He can be reached at [email protected].