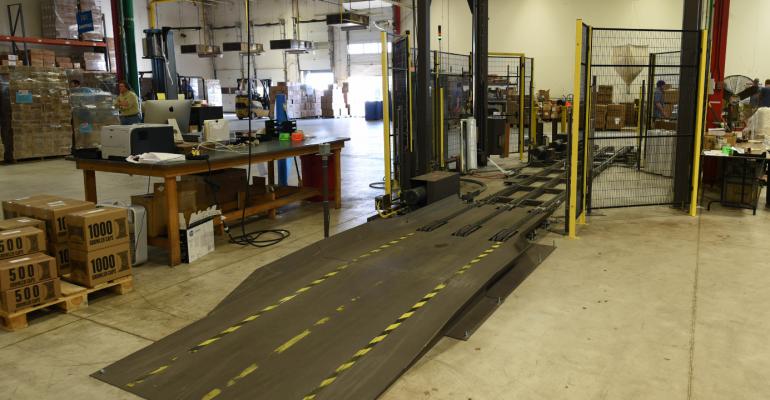 Pallet-jack loads access the conveyor over a gradual slope for gentle handling of the glassware.

Grandstand Glassware and Apparel is in a specialized business: it prints logos and other brand messaging on glassware and apparel for restaurants, bars and other brand-conscious companies and organizations. As a result, it has a large volume of different products to handle, finish and ship. Quantities for individual customers can range from a few cases to multiple pallet loads.

Grandstand’s business has increased dramatically in recent years with the rise of craft beer popularity, as well as the increasing awareness of eating and drinking establishments that they need to create and promote a brand identity.

The company’s extensive experience with beers and wines has also brought it expertise in which glass styles work best with which beverages, enhancing aromas and tastes. This ability allows it to advise customers about which glasses to choose, along with how to best project their brand images.

Grandstand works closely with its customers to recommend and/or design branding, glasses, matching apparel, coasters and more. It is a single-source for the materials it decorates, buying the apparel and glass and on occasion creating the molds for unique glassware its vendors then make.

As business has increased, moving an increasing volume of product in varying load sizes began to be a challenge for Grandstand’s existing material handling capability.

“Our previous methods of handling pallet loads depended on their size,” says Dave Hixson, Grandstand’s supply chain director. “A partial-pallet multi-case load might be wrapped by hand, while a full pallet load would be wrapped on a stretch wrapping system. But both operations were time-intensive and needed to be replaced by a more automated system.”

Adding to the complexity is that Grandstand’s end-of-line process is not linear. Decorated glassware coming off its lines, for example, is inspected and then hand-packed into cases and stacked on pallets for shipping.

In the past, smaller pallet loads were then moved by pallet jack to a wrapping area, where a worker would wrap them manually using a hand-held stretch film dispenser. Finished loads were then labeled and moved to the shipping area.

Larger pallet loads were being wrapped by a powered stretch wrapper. However, since Grandstand’s production line configuration did not allow the wrapper to be positioned at the end of a line, a pallet jack or forklift had to move each pallet load to the wrapper, then lift it onto the turntable. The driver then backed the pallet jack or forklift away, hooked the film on the corner of the load and started the wrapper. When the wrap was finished, the operator moved took the load to the scale, printed out and applied the proper label and took the load to shipping.

“This was cumbersome and also very time-consuming,” says Hixson. “It was becoming a bottleneck.”

Even though the variety of Grandstand’s production did not allow for an integrated end-of-line wrapping setup, it was obvious that its increasing volumes were going to require a more automated pallet-wrapping solution. When Hixson did an online search for information about stretch wrappers, he saw the LoPro conveyor and automated stretch wrapper system from Orion Packaging Systems. Given the unique features it offered, it looked like a solution that would work well for Grandstand.

What was particularly attractive to Hixson and the Grandstand management team was the flexibility and expandability of the LoPro powered conveyor (see a video here). The LoPro’s conveying surface is only 4 inches above the floor, and features a sloping entrance ramp that allows pallet jacks to place pallet loads of glass product on the conveyor via a gentle slope, which is especially beneficial when moving glassware. The gentle angle meant that pallets could be moved onto the conveyor using a small power-assisted manual pallet jack rather than a forklift. Pallet jacks are used to load the LoPro because they come from Production, only a short distance away, and larger equipment is not needed. The forklifts remove loads because they then take them to stage them for shipping (a longer trip) and then into trucks, and pallet jacks would be harder on the workers.

In addition, the conveyor’s modular design meant that as many sections as needed could be integrated into the entrance and exit conveyors leading into and out of the wrapper—and more could easily be added in future as requirements grew. 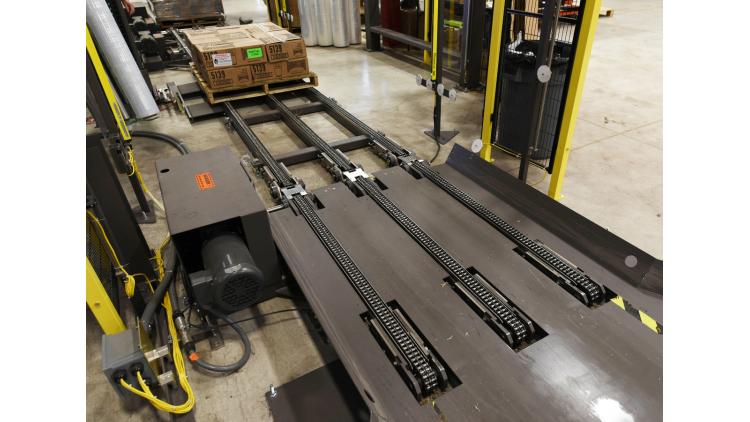 Individually-powered conveyor sections automatically carry queued-up loads into and through the wrapper for a more hands-off process, allowing the company to boost output without hiring more employees.

Since each section of the conveyor is separately powered, multiple pallets could be placed on the entrance conveyor and then moved individually into the stretch wrapper as required. Similarly, the exit conveyor could hold pallet loads until they could be moved to shipping.

Combining these features with an automated wrapper would provide a controlled, timesaving end-of-line wrapping system.

While designing the conveyor, Orion worked closely with Grandstand to modify the standard LoPro design to meet the company’s unique needs. For example, besides producing a variety of pallet load weights and sizes, Grandstand also uses three different styles of pallet, including standard wooden pallets, plastic six-leg pallets for international shipping and occasionally some odd-sized pallets. As they were moving from one conveyor section to the next, the odd-sized pallets sometimes caught on the front edge of the second section’s frame. Orion redesigned its conveyor to add a roller between each section that allowed all pallets to move freely across the gap between them. 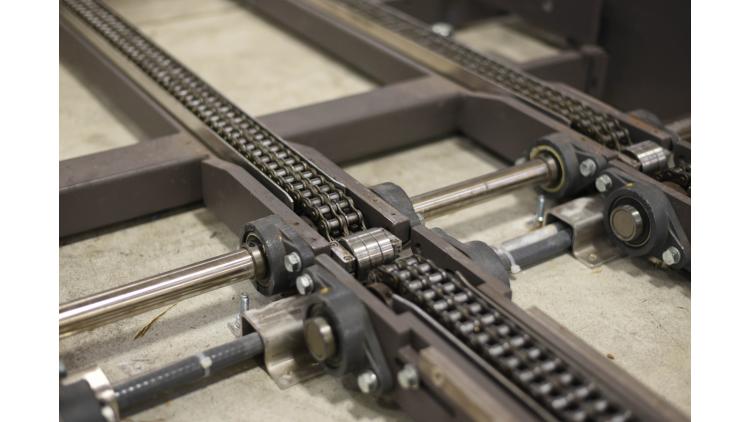 The final system that Grandstand installed included the LoPro powered conveyor and an Orion MA Deluxe automated stretch wrapper with extended mast and legs to allow it wrap loads up to 95 inches tall (almost 8 feet).

It also has an upgraded film carriage able to wrap pallets with 30-inch-wide stretch film. To accommodate Grandstand’s varying load size, there is an additional load detection sensor in the wrap zone to detect short loads. The LoPro conveyor has an extended entrance ramp, 60 inches wide and 120 inches long, followed by a flat section where operators load pallets onto the powered conveyor. The start button for the conveyor is on a pedestal next to this section so operators can easily start the conveyor into the wrapper, where the wrapping process starts automatically. 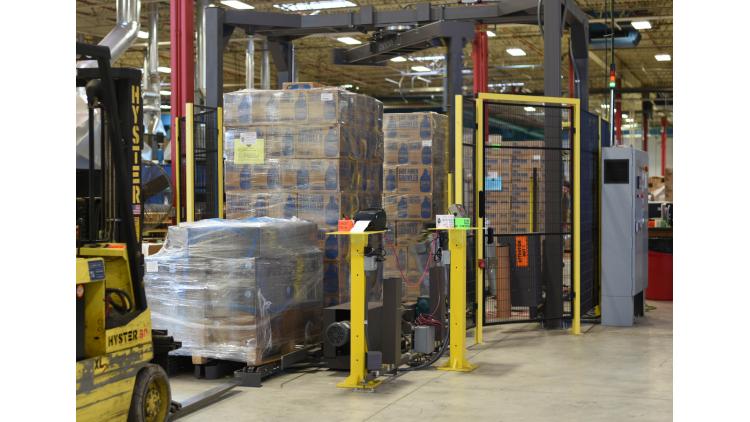 The exit conveyor provides ample room for wrapped loads, which continue moving to the end for pickup.

At the exit from the wrapper, Orion positioned a conveyor scale section incorporating a weight indicator from Rice Lake Weighing Systems. The scale has four load cells that are programmed to wait for three seconds after a pallet reaches the scale to allow the load to settle, then weighs the load and communicates the weight to a DT4 thermal printer from GoDex Americas. The printer produces two date and weight labels that the forklift operator pulls from the printer as he picks up the load. One label is placed on the pallet load, and the other on the matching Bill of Lading paperwork.

Once Orion had built the conveyor and wrapper to meet Grandstand’s needs, it delivered all parts to the facility, where Grandstand installed it with the help of KJB Packaging Solutions, its packaging material supplier. KJB’s engineer then put the system through trial runs to commission it, and trained Grandstand employees in its operation. Today, if there is ever a need for more information or assistance, Grandstand’s staff can call KJB or Orion for technical support.

As a growing company, Grandstand planned ahead while specifying and installing the system. It chose the LoPro partly because it is expandable. The system was installed with adequate space available at both the entrance and exit areas to add additional conveyor sections, and space within the control panel to add further controls.

Adding sections as business grows will give Grandstand the ability to position more pallets on the entrance conveyor to be automatically moved into wrapping, and on the exit conveyor as they wait to be moved to shipping. This will enable Grandstand to continue to optimize its handling of variable pallet loads as its volume increases.

“The aspect of the Orion system that first caught my attention, and that has been its greatest advantage, is the LoPro conveyor,” says Hixson. “We place a pallet on the entrance conveyor and push the start button and the system does the rest, moving the load through the wrapper and out onto the exit conveyor for pickup. It is the opposite of our previous cumbersome operation.”

Adding the new conveyor/wrapper system has allowed Grandstand to handle its increasing production without the need to add labor.

“Our business has grown about 30% over the last year,” says Hixson. “With this system, we are able to handle that increase without adding a single employee to our shipping department.” 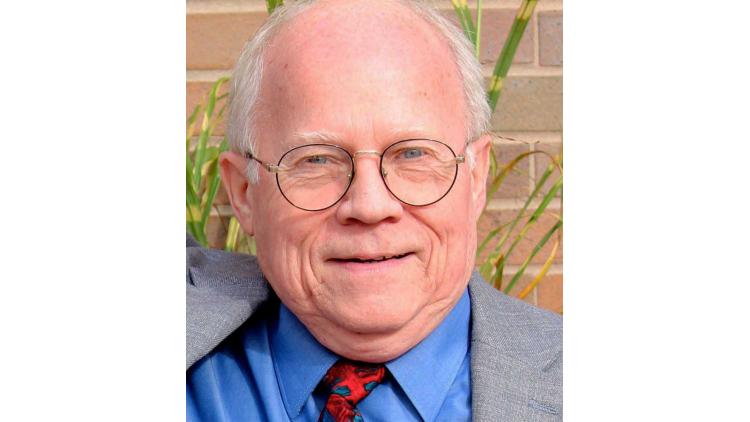 Freelancer William Makely has been writing about packaging machinery and materials since 1992. He can be reached at [email protected].