Available in multiple sizes, including a 16.9-oz bottle with a twist cap, Meridian's noncarbonated, naturally flavored AquaCal brand of water is fortified with calcium and is available in eight flavors.

“The challenge was to kick out bottles that weren't filled properly or had caps that were missing or were improperly seated on the bottles,” Hamilton notes. His automation company has been assisting Meridian over the years on many challenging projects. “This latest camera sensor installation was for a line that runs almost nonstop, at up to five-hundred bottles a minute, so downtime on our system wasn't an option.” 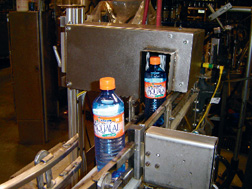 The sensor, above foreground, is useful on the water-bottling line because it synchronizes rejections using encoder counts instead of time to accurately track unacceptable bottles between inspection and rejection points.

Keith Gavin, who was called in from Cognex distributor TSI Solutions, Inc. (www.4tsi.com) actually suggested the new sensor to Hamilton/ITS. The latest in the Checker series, the 101E simplifies parts tracking and rejection on variable-speed production lines. Introduced this year, the 101E is said to be the first and only unit that uses patterns to detect and inspect parts to provide detection reliability. Offering the simplicity and the power of the original Checker 101, which synchronizes part rejection using time, the new 101E sensor synchronizes part rejection using encoder units.

Essentially, the 101E has a built-in PLC that verifies product presence and other packaging features, directly accepting encoder signals (a maximum of 300 kHz) and eliminating the need for an extraneous PLC when tracking and rejecting parts and packaging components. It works with Cognex's CheckMate™ software, which runs on a PC. Merdian installed the sensor on the line in March 2006. The bottling line was installed a month earlier.

In Meridian's case, the sensor determines things that can take place out of sight and under the bottle caps, and also checks improperly applied caps and tamper-evident cap-safety rings as the bottles pass through the inspection station. It also inspects for the proper fluid fill levels.

Eliminating the need for a high-speed parts-counter module, complex wiring or mounting devices, ladder-logic programming and precise parts handling when using multiple photoelectric sensors, the 101E can reduce or negate some of the costs and complexities of a PLC for parts tracking and rejection on variable-speed lines and bottling lines like Meridian's.

“We liked the fact that the sensor has a built-in PLC and encoder tracking, which facilitates kickout of unacceptable bottles and caps,” says Hamilton. “We contacted TSI and decided to go with the Checker 101E. It is proving to be very cost-effective.”

Operators can install the sensor in a user-friendly, step-by-step fashion, without ever having to stop the line. After the CheckMate software is installed on a PC, the next step is to mount the unit so that it faces the item to be inspected, connect the 24-VDC power cables connect the supplied USB cable to the PC connect, and the sensor is ready to begin acquiring and processing real-time video at 500 frames/sec. With the click of a “get-started” button, the sensor records images of “passed” or “failed” components so that the user can see exactly what's working and correct any problems, if necessary.

If inspection isn't required, the sensor can be used to improve process control by detecting and tracking parts or film webs. With built-in lighting and optics, as well as a built-in industrial I/O, the 101E detects packaging components, such as a straw on a juice box or the presence of a date/lot code, for example, by understanding what they look like. Unlike the shift register of a PLC, which requires programming, the sensor's shift register is automatic, enabling it to accurately track as many as 4,000 flawed bottles between the inspection and rejection points, which on Meridian's line, are a few feet past the bottle-capping station.

Described as a “multipurpose” sensor, the unit detects packaging features that may otherwise require multiple photoelectric sensors, or may not be within their capability because it precisely asserts its output at the proper encoder position for each bottle, Cognex says. Thus it can eliminate the need for a separate PLC. The sensor is able to operate on production lines running as fast as 3,000 parts/min. 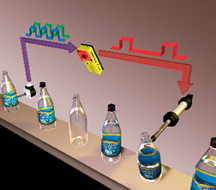 The compact sensor fits in a light-controlling hood through which the bottles pass. Its internal shift register tracks flawed bottles and triggers the kickout station.

TSI's Gavin says that he especially recommended the 101E to Meridian because its built-in PLC can accept encoder feedback, can track any “bad bottle” locations and can properly trigger the reject station when needed. “TSI and the Cognex team really helped us integrate a great solution for Meridian,” Hamilton points out. “With it, we cut about fifty percent off of the time it usually takes to develop logic and software.”

The AqualCal bottling line, which currently runs Meridian's 16.9-oz bottle and is expected to soon run an 8-oz size, was installed at contract packager Markey Foods (www.markeyfoods.com) in Vidalia. The self-contained sensor tracks seven different features and samples five to seven snapshots, or images, of each bottle. The numerous snapshots reduce false-negative responses. After the bottles pass the sensing station, an air cylinder rejects and kicks off bottles that don't meet requirements or that are questionable. The rejected containers move onto an accumulation table about 1.5 ft away.

The self-triggering feature of the sensor eliminates the need for external circuitry, which significantly helped to reduce the costs of purchase, design, installation and maintenance, says Hamilton.

After final in-place tuning, the project team found that the system tested 100-percent for cap placement and proper fill level. The plastic bottles feed on the line, shoulder-to-shoulder, at about 375/min under the current production schedules. But the 101E sensing system is rated to run at speeds up to 500 bottles/min.

Charles Purcell, vp of manufacturing at Meridian Beverage, says he is very pleased with the sensor's ability to synchronize cap rejection and unacceptable fill levels on the speedy packaging line using encoder counts instead of time to track flawed packages between the inspection and rejection points. “We expect effective solutions for our company's money,” he says. “The Checker is the type of thing we like to see. It's easy to use, efficient and cost-effective.”

Hamilton says TSI and Cognex offered a simplified approach to sensor technology, noting that the sensor cut design and engineering time in half and saved about 20 percent in equipment costs.