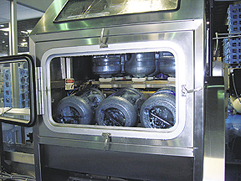 DrinkMore Water, Gaithersburg, MD, produces and sells 3- and 5-gal bottles of water for water coolers in homes and offices, while its sister company, DrinkMore Custom Water (DCW), produces and sells polyethylene terephthalate bottles of water ranging in size from 12 oz to 1.5 L. Last month, PD featured the PET line, which is brand new, and this month, it features the 3- and 5-gal bottle line, which is two years old.

DrinkMore Water opened its first water store in Rockville, MD, in 1993 to produce ultra-purified water for its customers to transport home for consumption, and in 1996, it began delivering the water to homes and offices in the greater Washington and Baltimore region, where it now has more than 12,000 customers. DrinkMore installed a complete new 3- and 5-gal bottling line from Aquatyzer Eng., Inc. (www.aquatyzer.com) in 2005. In 2006, the company moved the line to a new 40,000-sq-ft facility in Gaithersburg and added the new PET bottling line owned by DCW, which was described last month (http://www.packagingdigest.com/article/865.html). It also installed a state-of-the-art water-purification facility in the plant.

DrinkMore Water reuses the 3- and 5-gal polycarbonate bottles, so in the first step of the operation, an operator takes returned bottles from a rack, visually inspects each bottle and, if a bottle is acceptable, places it on the infeed conveyor, which transports it to a decapper. A sensor checks each bottle on its way to the decapper to see if it has a cap in place, and if it does not, it passes through the capper untouched. If the bottle does have a cap, clamps descend on the bottle and pull off the cap, which is discarded. 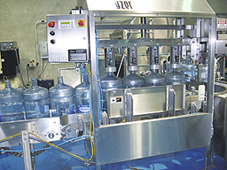 The vacuum leak tester checks four bottles at a time. It can detect leaks as small as 0.2 mm in size.

The next step is in-line vacuum leak testing. Groups of four bottles are lifted up against valves where silicon bladders seal the spouts, and a vacuum is pulled on each bottle. If the vacuum reading on a bottle drops by more than the programmed amount (signifying a crack or a pinhole leak), the bottle is rejected. The controller remembers which of the four bottles has the leak and discards that bottle after it leaves the detector. The system can detect leaks as small as 0.2 mm in size. All of the pneumatic components on all of the Aquatyzer equipment are supplied by Festo Corp. (www.festo.com/us).

The bottles are then conveyed to the washer, which consists of a tunnel through which the bottles are conveyed in a three-wide orientation. During a stop, three bottles enter the tunnel perpendicular to conveyor travel, and the conveyor then moves them through the washer. The bottles are held securely in place with Aquatyzer's patented Get-A-Grip system, in which spring-loaded clamps grip the necks of the bottles. The bottles are inverted, and in the pre-rinse stage, a strong jet of water shoots upward, hits the bottom of the bottle and runs back down the sides.

Next, a 135-deg-F detergent solution is sprayed into the bottles. This is followed by three rinse stations. The first is with plain water. The next is a sterilization step with water containing dissolved ozone. The final rinse is done with the ultra-pure drinking water. The bottles are then set right-side-up onto the conveyor and exit the washer. The complete operation takes about four minutes. 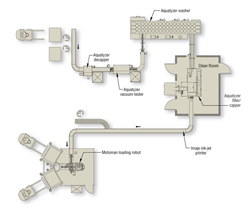 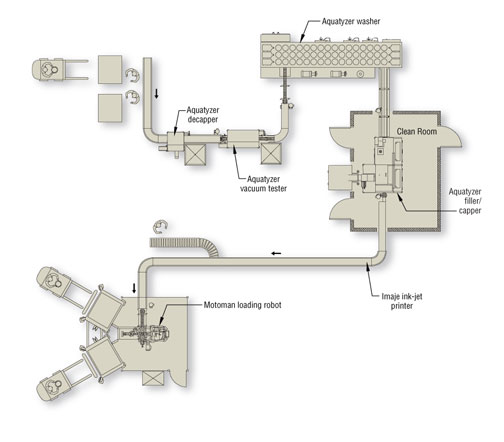 Next, the bottles are conveyed to the filler/capper, which is installed in a cleanroom. This is a monobloc machine in which the filler and capper are mounted on a single base and are driven by a common motor and gear-drive system.

Three bottles are filled at a time using PLC-controlled timers and pneumatic valves. The water is pumped from the storage tank and is injected into the bottles under pressure. When the bottles are filled, the valves close, and the bottles move to the capper. Caps are dumped into a floor hopper outside of the cleanroom, and are conveyed up to an overhead vibratory feeder that arranges them with the open side down and delivers them to a conveyor that carries them down to the capper.

Bottles pick caps from the conveyor discharge, and then travel beneath a small belt that travels above them and presses the caps firmly onto the bottles. A sensor at the exit of the monobloc checks to make sure the caps are in place and pushes bottles without caps onto a separate collection conveyor. An ink-jet printer from Imaje (www.imaje.com) applies a time/date code to the tops of the caps as bottles leave the cleanroom.

The bottles are then conveyed to an Aquatyzer-designed robotic racking system using an 80-kg robot from Motoman, Inc. (www.motoman.com). The robot picks up two bottles at time, orients them correctly and then inserts the pair of bottles into the rack. According to Bob Perini, president of DrinkMore water, "The Aquatyzer robot has been one of the best investments I have ever made. Our worker's comp claims have dropped to zero, my employees have embraced the new technology and my only regret is not getting the robot sooner!"

The entire line is controlled by a programmable-logic controller from Rockwell Automation (www.rockwellautomation.com). Sensors along the line detect bottle movement and backups and start and stop the different pieces of equipment accordingly.