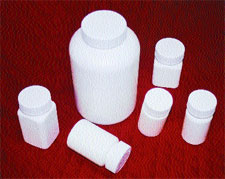 Dispensing Solutions, Inc., Santa Ana, CA, had only been open for four months when it landed a large government contract requiring 24/7 readiness and production capability of up to 180,000 bottles a day of varying counts of different products. However, its management team had more than 25 years of experience in designing pharmaceutical point-of-care dispensing programs.

This was during the time when the U.S. realized the potential increase in biological and/or chemical threats. In response to these threats, DSI helped create a unique, space-efficient, prelabeled unit-of-use repackaged drug product specifically for federal, state, county and city emergency-response programs. It was this concept that landed the government contract.

DSI's fastest bottling line when it landed the contract in the fall of '01 ran at just 50 bpm. The company needed to add another line with a speed of 200 bpm, and it needed it quickly. "Not only did we need a high-speed bottling line," explains Richard Wolpow, DSI co-founder and chief operating officer, "but we also needed a universal line; one that could handle a variety of products with minimal changeover and high accuracy. And there wasn't much space–we combined two production rooms to create a 4,300-sq-ft (72 x 60-ft) room for our existing blister-packaging line, as well as the new bottle-packaging line. We also had to accommodate product and workflow when all machines were running."

To meet this challenge, DSI turned to familiar partners for help, calling on DT Packaging Systems for most of the equipment, as well as integration and validation services, and Package Devices LLC, a local independent sales representative organization specializing in complete lines. Package Devices represents DT and others, and suggested a high-speed in-line R.L. Craig labeler (distributed by RayPress) and a Pester bundler at the end of the DT Packaging-supplied, 200-bpm line. Packaging Devices had previously sold DSI seven DT Kalish tablet/capsule counters for other lines.

"Most of our equipment came from DT," notes Wolpow. "We've always been satisfied with it, and we relied on Package Devices, which supplied us with our original counters." DSI has five tabletop DT Kalish counters and two low-speed automated DT Kalish lines.

The result? Four months after placing the purchase order, DSI's new compact, integrated bottling line ran for 26 days straight, churning out 3.8 million units to meet the mandated level of production. "It not only enables us to deliver the volume required by our government obligations, but it also gives us the flexibility to package any pharmaceutical product made in the country, with no changeover and great accuracy," says Wolpow.

"We were under pressure to start delivering on the new contract," he adds. "DT understood the complexities of the contract and gave us top priority." While DSI bought the labeler and bundler separately, DT's Integration Business Unit purchased, assembled, wrote validation documentation (which included more than 2,500 challenge steps), and performed the factory acceptance test on the entire front end of the line at DT's facility. It provided a video and test results for DSI to approve. "This helped expedite delivery by two weeks," notes Wolpow. DT then shipped the segment to California, and installed and assisted in the validation of the line, which was performed by DSI.

"There's not a lot of equipment available today supplied with validation protocols that are as detailed and systematic as this DT line," says an appreciative Wolpow. The integrated line fits into a footprint of 49 x 25 ft, well within the limits of the allocated space.

Electronic counters key to flexibility, accuracy
The high accuracy and exceptional flexibility without time-consuming changeovers are mainly due to the unique DT Swiftpack SV2 electronic tablet/capsule counters, four of which are mounted in quad formation for maximum speed on a four-lane conveyor. These electronic counters assess each product electrostatically against a specific programmed signature consisting of parameters such as size, shape and weight.

If the product doesn't match that predetermined signature, it is rejected. "These counters are so sensitive that they detect not only different products and broken or chipped tablets, but also the slightest bit of moisture, for instance from a finger, and reject that product. This ensures detection of tampered product, as well. The new line therefore supports our own QC process. Our goal is to give our customers the best possible product," says Wolpow.

This electrostatic assessment is particularly important for a repackaging application, where product is first emptied from bulk packaging, a process that can frequently result in broken or chipped tablets and a lot of dust. For high-volume applications, electrostatic sensing also has a distinct advantage over light-based counting technology, which does not function properly where there is dust buildup.

Also, light-based technology will count as one tablet two identical products that fall one in front of the other, while the electronic counter will recognize that the double-drop does not match the proper signature. Overfilling is unacceptable with ethical drugs, points out Mike Bruhns, managing partner of Package Devices, who has worked closely with DSI's co-founder, Dan Guinn, for more than 15 years.

"One of the biggest challenges in making this line high-speed was finding an in-line labeler and label stock that would run as fast as the rest of the equipment," says Bruhns. "It was a very aggressive approach to put an in-line labeler in a 180-bpm application.

"The more conservative way would have been to use a large rotary labeler, but an in-line labeler reduced capital investment, delivery time and floor space, and it gave DSI much more flexibility." Bruhns worked with Doug Swann of Raypress, who handles custom labeler applications. The R.L. Craig labeler, equipped with a Label-Aire Model 3125 labeling head, had to be specially adapted to maintain the 180-bpm speed.

The pressure-sensitive label was particularly tricky, since it has a section of backing that stays with the label when applied. This leaves a hole in the backing, which is also used for transport, so the backing is weaker and susceptible to breakage. Dozens of different film variations were tried. Working closely with Newport Printing, DSI finally found a label construction that worked at the required speed without breaking by using a custom, semi-gloss facesheet and carrier sheet die-cuts married to a custom film/paper combination liner with a high-tack permanent adhesive.

Before the new line was installed, DSI manually packed finished bottles into manually folded chipboard trays, and then shrink-wrapped the trays and bottles in expensive polyolefin film. The Pester stretch bundler using low-density polyethylene film saves DSI on both labor and material costs. "We recommended a stretch bundler because it uses about 20-percent less film and less energy than shrink wrapping, and it can run at higher speeds," notes Bruhns.

Wolpow calculates that the chipboard tray plus polyolefin film and labor cost more than 20 cents per shrink-wrapped tray, while each bundle produced by the Pester machine using LDPE costs only half a cent. With run volumes of over 5 million on some products, it's easy to see how the bundler is expected to pay for itself in a short period of time.

Line runs 200 bpm
An operator loads bottles into the bulk feed hopper, which delivers them to the A300 unscrambler. The unscrambler features tool-less changeover, and the feeder is electronically integrated. Containers are supplied on demand from the unscrambler, which orients and cleans the bottles with a blast of deionized air, discharging them upright in single file onto the filler conveyor.

The single file of bottles is divided into four lanes by the conveyor using a servo-controlled diverter gate. Bottle flow, which is controlled by a PLC, is based on the demand of the four filling heads. Bottles are stopped under the filler chute by air-cylinder-controlled gates interlocked to the filler.

As the tablets pass through the count head, which contains 12 electrostatic sensors, they cause a disturbance in the electrostatic field, which is measured against preset parameters. Those tablets matching the parameters are counted; tablets not conforming to the parameters are identified. When the count is completed, the filled container exits. Bottles containing nonconforming tablets are rejected to a reject tray.

The "good" bottles are placed in single file by a servo-controlled converger, and travel onto an accumulation table before going to the DL Tech in-line capper. The accumulation table provides a buffer zone so that filling can continue even if the capper is stopped at some point.

Caps are placed into the floor-level cap elevator/sorter hopper and simultaneously elevated and sorted on a cleated chain. Caps discharge into the cap chute, which contains a backup sensor to control cap feeding from the elevator. Bottles pick up caps from the cap tray located at the chute discharge.

A dual-sided belt system holds the bottles from before cap pick-up to after the last torquing station to ensure that bottles do not fall or turn. Each bottle and cap passes through four stations of two spindles with tightening disks. The first two stations apply the cap, and the last two apply a preset torque with pneumatic clutches to prevent damage. A cap inspection system checks for crooked, loose or missing caps and fallen bottles.

Capped bottles exit the capper and continue to the Pillar Technologies induction sealer, which seals the cap liner to the bottle, providing a tamper-resistant, airtight seal. A 2-kw air-cooled induction coil is placed over the conveyor and seals the liner as the capped bottle passes under the coil. The induction sealer has a stalled-bottle and foil-liner detection and reject feature, which shuts down the unit if a bottle stalls and rejects any bottle without a cap seal.

After exiting the induction sealer, the bottle is cooled on the conveyor and turntable, then proceeds to the DL Tech CAP 2C in-line retorquer, which has two sets of two spindles, each with pneumatic clutches that apply torque to the cap. This machine is required because the vibration of induction sealing heats the metal and loosens the cap, which must be retightened. Bottles proceed to the labeler, which has an integrated vision system. A pressure-sensitive label is dispensed and wiped down by a pair of spring-loaded gates.

Labeled bottles are then conveyed to the Pester stretch bundler. The size and configuration of bundles vary with the product. For a 20-pack, for example, five bottles are cross-pushed in rows four times to create a collation, which is pushed through a vertical film curtain formed by top and bottom rolls.

The film and bottles are clamped, after which the film is mechanically tightened like a rubber band to a repeatable, validatable tension. This mechanical tightening eliminates film slippage and wear. A top bar descends, forming the rear seal by pushing the film onto a safe nonwear hot knife below the working surface.

The bundle is then conveyed through a low-energy tunnel. Since the mass of film needs no shrinking, only a small amount of heat is used to lock the ends down. An operator manually packs bundles into corrugated shipping cases.

For Wolpow, the benefits of the new line go beyond simply satisfying one client's requirements. "The flexibility and speed of this new packaging line open up new markets and enhance our ability to serve larger clients with more demanding requirements, which boutique repackagers simply can't handle," he relates. "And, we can offer more competitive pricing and greater flexibility than some of the industry goliaths."