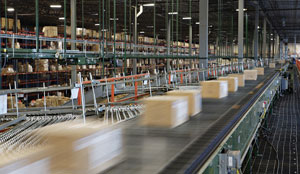 In 1999, Lifetime Brands Inc. began laying plans for a greenfield distribution center in New Jersey that would consolidate its three manual distribution operations into a single, highly efficient and very automated facility. In a staged approach over eight years, the company extended not only the distribution center's material-handling equipment, but also its physical size to accommodate its needs, expanding its total space to 700,000 sq ft.

Lifetime Brands is a leading designer, developer and marketer of kitchen ware, cutlery and cutting boards, bakeware, cookware, pantry ware, tabletop, home decor, picture frames and bath accessories. The company markets its products under some of the industry's best-known brands, including KitchenAid®, Farberware®, Mikasa®, Cuisinart®, Calvin Klein® and Nautica®, as well as environmentally-friendly products such as EcoWorld®.

Lifetime Brands' products are distributed through almost every major retailer in the U.S. In 2007, the Garden City, NY-based company had net sales exceeding $493 million, a 7.9-percent increase over the prior year. This growth has been influenced by the company's vigorous brand acquisitions.

Pick-tower equipment additions were made in 2004, and the building was expanded by 150,000 sq ft in 2006 to accommodate additional conveying and high-speed sortation equipment, another pick tower and additional very-narrow-aisle (VNA), high-rise pallet racking to accommodate 100,000 pallets. The DC has 4.7 miles of VNA wire-guided aisles. Finally in July, 2007, a fifth pick tower was added, as were a third high-speed sorter and additional conveying equipment.

Ninety-five percent of Lifetime Brands' 7,600 SKUs come into the Robbinsville DC in containers, which are opened. The products are palletized, and then stored or used in current orders using a cross-dock operation.

A warehouse-management system (WMS) helps direct picking, as well as replenishment of the product, from the stored pallets. Batch waving is utilized through the picking and sortation process. Full cases make up the majority of the products handled. 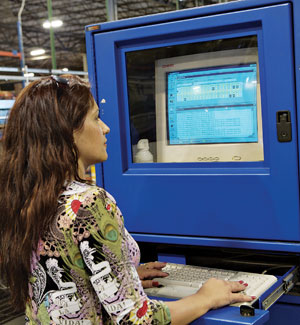 About 20 percent of the DC's products are split-case, manually picked and scanned to carts using radio-frequency scanning technology. These products are then inducted into the sortation at one of several induction points.

Split-case items include kitchen gadgets and food-preparation items, which are usually picked-and-packed for a specific store, rather than shipping bulk to wholesale. Normally, the DC ships in bulk, but split-case items are packed for each store and then consolidated for shipping.

The hub of the Robbinsville DC, and where it realizes its most profound efficiencies, is its sortation and conveying systems, which reduce manual labor.

“We have energy conservation built in throughout the entire conveyor and sortation material handling systems,” says Dematics' Bob Poth. “Lifetime Brands is able to determine when product is moving through any part of the facility, and turns off a section of the system automatically, when it is not in use, and then turns each section back on when the product volume comes back.

“This is achieved through Dematic's control system by using photo eyes strategically located throughout the conveyor equipment,” Poth says. “This operates in conjunction with selectable timers, so the equipment is only running at planned intervals. It is a very simple and very effective energy conservation module that we developed and integrated into the system for Lifetime Brands.”

Two Dematic RS Series high-speed sliding-shoe sorters are utilized in the DC. The interleaving extruded aluminum slats in the sorters provide a wide, flat carrying surface that prevents jams. They allow the sorting of a wide range of product sizes and types with quiet and positive sortation and ultra-high throughput. 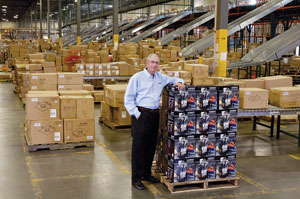 For cases coming in and out of the sorters, the DC utilizes zero-pressure accumulation conveyors to temporarily stop, hold and release material. They allow product accumulation along a line without pressure buildup.

The DC's energy-conservation module, conveyors and sortation are run under Dematic's SortDirector® warehouse control system (WCS), which integrates with the Robbinsville WMS and coordinates all product movement inside the DC.

By mid-year 2007, Lifetime Brands' Robbinsville DC had the capability of handling 45,000 cases/day at an extremely high accuracy rate. “The energy efficiencies at our New Jersey facility have helped cut our distribution operating costs,” says Craig Phillips, senior vp for distribution at Lifetime Brands. “We have reduced our distribution expenses as a percentage of sales, by 3.75 percent over the past five years.

“Uptime reliability is also critical to running an efficient DC,” continues Phillips. “A key operational metric we look at is our system's uptime, and at Robbinsville, it is more than 99 percent. We also attribute much of our inventory and order accuracy to the systems we have in place.”