Package built with an eye toward precise specs

When designing the packaging for the smallest catheter in the world, Flexpak Corp. (www.flexpack.com) faced a big challenge. The packaging was for the micron-scale iTrack™ 250A microcatheter, manufactured by iScience Interventional of Menlo Park, CA.

The iTrack is used to add fluid to certain locations in the eye in the application of minor, invasive ophthalmic procedures. What makes iTrack unique is its illuminated ophthalmic microcatheter design used specifically for anterior segment access technologies in the front third of the eye, which includes structures such as the cornea, iris and lens. What similar products lack is the illuminated beacon at the distal tip of the iTrack, which allows exceptional visual tracking of the microcatheter location. The atraumatic tip design and distal shaft flexibility, unique to iTrack, minimizes potential tissue damage. The number “250” in iTrack 250A indicates the 250-micron diameter at the tip. A fiberoptic filament runs through the distal shaft and is attached to a light source sold separately by iScience. 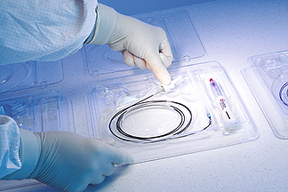 The final version of the package design consists of a base tray with five cavities and a cover with a positive snap.

The iTrack provides site-specific delivery of saline viscoelastics (used to stabilize and protect ocular structures during surgery), and other sterile ophthalmic solutions.

Flexpak had to incorporate six parts into the iTrack packaging, including a fluid injector and a microcatheter composed of a fiberoptic cable 6 ft. long, a tubing infusion line 18-in.-long attached to a smaller mid-shaft 4-in.-long, a distal shaft 1.5-in.-long and two integrated connectors.

Original packaging for the iTrack was designed by a different thermoforming company. For the redesign, iScience awarded Flexpak the project due to its excellent presentation and to the understanding that they were being challenged to reduce the footprint of the original tray from 12 x 10.5 in. Mike Sorensen, Flexpak design engineer, says, “I managed to reduce it to 9.5 in.2 The original cover was difficult to remove, so I redesigned it to be easier to take off.” The final Flexpak design consists of a base tray with five cavities and a cover.

The new cover design is a better fit with a more positive snap,” according to Jerry Wroblewski, iScience's senior vp of operations. “And it's smaller at 8.25 x 8.25 in.2. This allows more ease of handling in the operating theater when the package is placed into the sterile field. The medical staff can more readily open the cover and get to the iTrack.”

Flexpak uses Pentamed® PETG film from Klöckner Pentaplast (www.kpfilms.com), a leading global manufacturer of rigid films. Explains Ed Berger, Flexpak's vp for business development, “Klöckner Pentaplast is our approved vendor for Pentamed PETG films. We wouldn't use anything else. For one, its Pentamed films have the highest clarity available. Secondly, it die-cuts cleanly. You don't want to find cutting debris in the package, which is of critical importance, especially when operating on someone's eye. Thirdly, its service and technical support is unparalleled in the industry.”

For iScience, the package's appearance was of paramount consideration. Because of the superior clarity of Pentamed films, there is no shift of color during gamma sterilization used in medical device packaging. This made it an attractive choice.

Wroblewski at iScience outlines another necessary function that the packaging needed to perform, saying, “The distal section is fragile, as it allows isolation of the distal shaft and tip from the fiberoptic. filamnet. So the packaging had to really protect the distal section.” Again, the strong puncture-resistant quality of the film fits the need.

Sorenson explains that “the real challenge was to design a package to retain all the components that would pass a drop test. Keeping the components separate in their respective cavities for ease of handling in the operating theater was also key.”

Justin Glass, business manager for medical device films at Klöckner Pentaplast, adds: “Our films exhibit strong integrity, assuring that contents are secure. The high-impact strength of the Pentamed films is unassailable with respect to medical packages.”

And, as with most challenges, the new design also had to realize a cost savings.

In the end, the overall packaging as designed by Sorensen and his peers at Flexpak elated the team at iScience for all the right reasons: clarity, puncture resistance, high impact and cost savings due to the reduced size and overall layout. Dave Kupiecki, iScience's project manager at the time, said: “I really put in very little effort as a customer in terms of computer-aided design, revisions, fit, etc. I basically handed over the product with the applicable constraints (pouch, size limits and material), and Flexpak did the rest. They were very responsive and truly did a huge amount of design, leaving me free to execute the critical deliverables on product development.”

Flexpak uses a Sencorp 2500 (www.sencorp-inc.com) thermoforming machine for both the tray and the cover. First, the Pentamed film is unwound from the roll, and is carried through the oven and formed into the designed shape at the molding station. From there, it is indexed to the die station where it is cut from the web. It is then moved to the picking station where it is manually picked free from the web. It's then inspected and packed in a corrugated carton. 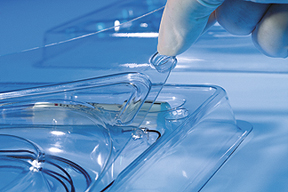 iScience asked its packaging supplier to produce a smaller, easy-to-open container that could handle and protect the six pieces of its microcatheter.

Once the thermoformed pieces are shipped to iScience's manufacturing facility in Menlo Park, the iTrack components are assembled, placed in the tray and covered, and then put into a standard pouch that is clear on one side with a Tyvek® label on the other. Boxes of 10 catheters are then sent to a sterilization facility and irradiated, ready for delivery.

“We are in the process of building inventory to forecast,” says Wroblewski. “We are marketing iTrack nationwide and have the CE Mark, allowing usage in Europe.There are 'thought leaders,' who are doctors going after new procedures. They are starting to adapt iTrack to other surgical procedures, thinking outside of the box.

Right now, Wroblewski says, iTrack is being adopted for treating glaucoma. However, doctors are doing other things with iTrack, he adds That's because flexibility is a key benefit, permitting 360-deg access to Schlemm's Canal, a little-known structure in the eye. (the iTrack injector is manually operated and screw-driven, allowing solution to be slowly metered).

iScience maintains its own sales force and distribution arrangements. According to its website, “iScience is a science, technology, and patient outcome-driven medical device company that specializes in the development of leading-edge interventional therapies and procedures for ophthalmic diseases.”

It's clear that iScience's place on the leading edge carries over to its packaging. The final result is packaging as unique as the product.

Sums up Wroblewski: “One, the packaging is convenient for our operators to load the product by hand. Two, it presents well. And three, we can use the packaging for multiple products.”

Flexpack's Berger expresses his pleasure, saying: “We stand by our corporate belief in doing right by our customers. And in this case, I know the project manager was very complimentary about the package's appearance and our response time.”

Response time, indeed. Originally, iScience's timeline for the packaging project was eight weeks. Flexpak completed the design and had the tooling manufactured within five weeks.

Overall, it was a project where iScience, Flexpak and Klöckner Pentaplast all saw eye-to-eye to arrive at the best solution in the shortest time possible.