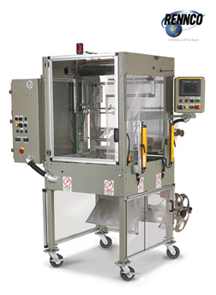 The co. introduces its redesigned and improved line of packager models at Pack Expo 2007. On display will be a 20-in. model, equipped with a new controls package and improved temperature controls for ease of operation. A 24-in. packager will be equipped with a seal system capable of running a cast PP, which will yield greater cost savings by utilizing centerfolded material versus premade bags. A 36-in. packager will be equipped with a low energy seal system, which can seal materials at temperatures significantly lower than previous seal systems. The packager will also include a new, fully integrated controls package and a servo belt infeed conveyor for ease in loading products. All of the co.'s vertical packagers are capable of sealing PE, polyolefin and PVC films and are equipped with interlocked perimeter guarding.