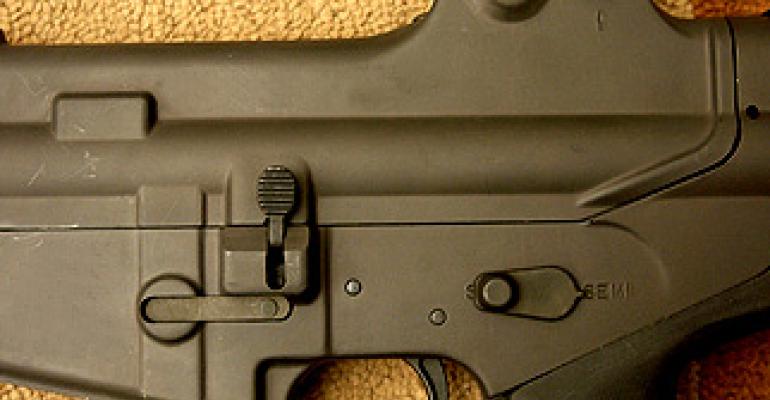 At first glance, the packaging the U.S. Army uses for its guns and ammo looks a bit like it's stuck in a time warp. Even though the weaponry itself has increasingly gone high-tech, the packaging still consists mostly of steel or wood containers that look like they could have seen action in World War II.

Outward appearances, however, can be deceiving. Today's military containers aren't your grandfather's ammo boxes. The military relies on packaging designs and materials that are every bit as modern as the weapons and ammunition inside.

Much of the Army's weapons packaging falls to the engineers working for the Armament Research, Development and Engineering Center (ARDEC) at Picatinny Arsenal in Rockaway, NJ. “Our mission is to package everything designed at Picatinny, and that's about 95 percent of the military's ground firepower,” says Mike Ivankoe, supervisory packaging engineer for ARDEC. The list of “products” they package ranges from small arms to huge howitzers and all the munitions that go into those weapons.

Ivankoe says a couple of trends over the past 10 years or so have made well-designed packaging more important to the military than ever. One is the growing use of electronics, which makes weapons more effective but also more delicate and costly. For example, Ivankoe and his team have designed packaging to protect precision-guided munitions costing tens of thousands of dollars per round. There's also been an ongoing trend to make munitions safer during storage and transport.

“There's been a growing awareness over the past 10 years that packaging is a crucial part of a munitions system—not just something you strip away and leave on the battlefield,” he says.

In some ways, the design goals for military and civilian packaging don't differ all that much. “Our packaging protects against a variety of environmental threats, just like commercial packaging,” says Ivankoe. He cites resistance to temperature extremes, moisture, impact, UV radiation, electromagentic interference and vibration as a few examples. And just like their commercial counterparts, ARDEC's packaging engineers also design with cost, weight and size constraints in mind.

What sets the military apart, however, is how severe the environmental threats can be. According to Steven Sicoli, an ARDEC packaging engineer, Department of Defense specs call for the packaged weapons and munitions to withstand temperature extremes from -65 to 160 deg F as well as drop tests–up to 7 ft without damage to the product and up to 40 ft without detonation. Packaged goods are also put through vibration tests at high and low frequencies to simulate the many different transportation conditions, as goods make their way from the factory to the battlefield.

In addition, military packaging has to meet longevity standards that include a lifespan of 20 years in protected warehouse settings and more than two years under field conditions. Finally, the military assesses packaging for its ability to hold up against nuclear, biological and chemical weapons. “We have to worry about of lot of things industry doesn't worry about,” Sicoli says.

One application that highlights the difficulty in creating military packaging involves the Excalibur GPS-guided artillery round, which debuted in Iraq in 2007. Ivankoe notes that this 155-mm precision round bristles with guidance-related electronics, which add a fragility factor to an otherwise rugged munitions product. Passing the 7-ft drop test on the packaged round's nose end was particularly difficult and required many engineering hours. “Creating the Excalibur packaging was a herculean task,” he says.

Designing a 'cocoon' for shells

That task fell largely to packaging engineer Peggy Berkowitz, who came up with a foam-and-plastic “cocoon” that allowed the round, which weighs more than 150 lb when packaged, to pass all of its drop tests. Designed with input from finite element-analysis (FEA) software, the cocoon consists of 9# foam, 20# HDPE sheet and a structural plastic load spreader—all arranged with attention to the extrusion orientation of the plastics. Berkowitz says she had to shoehorn the entire structure into the 1.5-in. space between the Excalibur's nose and the interior wall of its wooden exterior container. “We had a limited amount of space, given the impact requirements,” she recalls.

Noting that the use of electronics is on the upswing in weaponry and munitions, Ivankoe predicts that more and more military packaging will require the same kind engineering approach that went into the Excalibur package. He says more and more of the packaging has to double as a Faraday cage and provide shielding against electrical fields.

Another important aspect of ARDEC's packaging mission is preventing munitions from blowing up–at least until they're supposed to blow up on the battlefield. Fire, bullets, fragments from other projectiles and various types of impact shocks can all cause unwanted detonation, and ARDEC's packaging increasingly helps mitigate these threats as part of a design approach known as “Insensitive Munitions,” or IM.

Yet even with a systems design approach, IM compliance isn't easy to achieve. Sicoli notes that very few products pass the full battery of IM tests required of all new munitions. In fact, the most recent example he cites was the XM155 Spider Grenade program from 2005.

Ivankoe credits IM, which has been ramping up since the 1980s, as raising the profile of the packaging in the military. “Packaging is no longer seen as something sacrificial,” he says.

Indeed, some of ARDEC's most interesting packaging innovations are rooted in IM compliance. One case is a patented “ionmer window” that has been integrated into different types of metal munitions containers. Injection-molded from A. Schulman's Formion ionomer, the window melts at roughly 260 deg F, creating a vent in the side of the container if a fire breaks out. It's a key piece of IM packaging technology because the vented munitions burn rather than detonate.

For all of the success that foams and the ionmer window have had in solving specific problems, don't expect the military to abandon its fiberboard tubes and metal boxes in favor of plastic outer containers or overpacks any time soon. These traditional container styles have had a long track record when it comes to meeting durability and cost requirements.

“So far, plastics haven't been good choice for us,” says Sicoli, explaining that low-cost thermoplastics have trouble standing up to the thermal and mechanical load requirement of the military.

Still, there have been some nearly successful attempts to create all-plastic “ammo” containers.

Ivankoe and Sicoli pointed to one recent project to create a glass-filled thermoplastic composite package for mortar shells. This “monopack” was created as a handy alternative to the current pair of fiberboard tubes in a metal overpack. “The soldiers like the composite pack in principle,” Sicoli says. And the container passed its initial gamut of impact and IM tests. The stumbling block is cost.

In the meantime, there is plenty of work to do to improve the traditional metal containers. ARDEC's packaging engineers are looking at corrosion-resistant coatings for metal ammo boxes instead of painted versions. ARDEC has also launched a way to come up with a set of interlocking containers that form a cube regardless of the containers' sizes. The new container design would replace the 18 container varieties with just six, which would cut costs. Says Ivankoe, “If we have to customize, we will. But we try not to reinvent the wheel.”