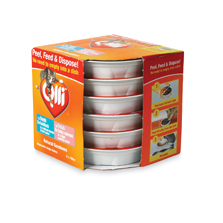 Now, a retortable, plastic catfood package with a peelable seal is getting a paw up on barrier technology with some creative twists. And the folks at Butcher's Pet Care Ltd., Crick, Northamptonshire, England, a privately owned company that manufactures petfood for the U.K. and European markets, are purring with pleasure about their new line of Olli(TM) premium catfood. Also known for the Butcher's(TM) and Butcher's Choice(TM) dogfood brands, Butcher's Pet Care considers its new plastic, retortable, single-serve container a first for a wet catfood product in the U.K. and in Europe. Each single-serving size package contains 100 g of product and is designed to allow the pet owner to simply peel off the lidding, feed the cat straight from the dish and dispose of the container when it's empty. With the slogan, "good for your cat, easy for you," the Olli line includes specially formulated meals in four "supreme" recipes to keep cats happy and healthy.

Butcher's Pet Care believes it may be on the whiskers of an entirely new catfood segment with a preservative-free product in a retortable, plastic dish package. On the prowl to provide pet owners with a wet catfood made with fresh ingredients that contains no cereal, soya, artificial coloring or preservatives, the company says it hoped to create a user-friendly container that would meet consumer convenience expectations. The single-serve Olli line was also created to cater to consumers' strong preferences to pamper their pets, which has been a growing trend in Europe for several years. The company finds that devoted pet owners want to feed their cats food made with top-notch ingredients that's tasty, nutritious, simple to handle and free of extraneous ingredients.

Launched with much success in March 2006, first in two major U.K. stores and then later to other retailers, the four sophisticated gourmet-style Olli varieties include flavors such as Salmon in a Light Parsley Sauce, Fresh Haddock in Tomato Sauce, Fresh Chicken and Turkey in Mushroom Gravy and Lamb in Mint Gravy.

The company says it favored a plastic container for its new catfood formulation because the dish could offer a wide design scope, as well as easier handling than cans and other packaging made of conventional materials. The container had to withstand the rigors of retort sterilization and protect contents effectively against oxygen during the retort process. It also had to do so for a whopping 18 months on the shelf while avoiding the growth of bacteria and preventing rancidity and discoloration, loss of flavor and nutritional value and any changes in product texture. 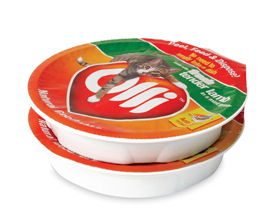 Huhtamaki worked with Ciba Specialty Chemicals to develop a barrier container that can achieve Butcher's Pet Care's specific barrier and performance requirements. Huhtamki thermoforms the opaque white dish of polypropylene/ethylene vinyl alcohol/PP with Shelfplus 02, the latter of which combines what Ciba Specialty Chemicals calls a passive EVOH barrier and the Shelfplus O2 oxygen scavenger, which absorbs oxygen present within the package and oxygen that may permeate the package wall.

With a 113-mm diameter, the single-serve dish is thermoformed to a 140-mL depth by Huhtamaki's Portadown facility in Ulster, Northern Ireland, using a 1-mil film sheet thickness. The foil/film barrier lidstock from Huhtamaki is described as a polyethylene terephthalate/foil/PP, that's gravure-printed in six colors.

Read how Unilever restaged a shampoo line with a PET bottle with a COLOR THAT's RESISTANT TO UV LIGHT, chosen under license from Ciba Specialty Chemicals. Visit www.packagingdigest.com/ info/colormatch

The Shelfplus O2 is incorporated in the second of the PP layers, PD is told by Marie-Raphael Morvillier at Ciba Specialty Chemicals in Switzerland.

She reports that that the Shelfplus O2 oxygen scavenger has a natural synergy with EVOH resin when used in rigid polypropylene containers for retort-processed food. Shelfplus O2 compensates for any loss of barrier properties during and after the retorting process until the EVOH recovers its original barrier properties. Basically, the scavenger is at its most active state when the EVOH barrier is at its weakest. The convenient dish also features a peelable foil membrane seal and a proprietary anti-slip base that prevents it from slipping so that it can easily be used on plastic mats or hard floors.

Multipacked in counts of six and 12 and merchandised in die-cut paperboard sleeves, the dish is neither resealable nor able to be refrigerated after opening. The foil peel-seal locks out air and other harmful elements to protect the food's nutrients. The required amount of the oxygen scavenger was calculated through a simulation program based on the barrier performance of the EVOH during the retort process.

In this dish incorporating the Shelfplus O2 oxygen scavenger, the oxygen transmission rate has shown that the barrier performance remains the same through the retort process and over the product's shelf life.

The pack was tested over a 16-month timeframe and the trials of barrier performance was successful. The packaging technology also proved to be competitive with steel cans.

Since the launch, the Olli line has wowed cat owners and cats who are looking for a convenient feeding solution, notes Butcher's Pet Care. Morvillier says that Shelfplus O2, which is available in the U.S., is being evaluated by U.S. packagers and is generating interest with other companies besides Butcher's Pet Care. "Similar packages containing Shelfplus O2 are already being used by other food companies," she points out.

Butcher's Pet Care packages the catfood in the U.K. on a new packaging line installed to handle the Olli foods. Sarah Thomas, head of marketing for Olli, says the consumer reaction to the new line has been the cat's meow. "Olli has been a hit across the country."