Poitiers, France is well known for its local gastronomy, including delicacies such as lamb, wine and goat cheese. And in France, where many local producers and artisanal cheesemakers depend on all-natural methods for maintaining cheese shelf life, producers have been increasingly turning to the use of oxygen absorbers to extend the shelf life and freshness of their products.

Le Père Bafien is one such producer. Originally a family business, Le Père Bafien currently exports its products to countries as far away as Vietnam, in addition to the U.S. and to neighboring European countries. As the cheesemaker has found, in a global economy, the ability to extend shelf life is important because it increases the time available for shipping and extends the chain of distribution into new and far-reaching markets.

In order to maintain the freshness of its goat cheese for extended periods, Le Père Bafien uses oxygen absorbers from Multisorb Technologies LLC (www.multisorb.com). The removal of oxygen from cheese packaging protects the product from bacteria and other contaminants. The French producer packages its cheeses in a variety of packaging materials and then ships them to both wholesalers and retailers. 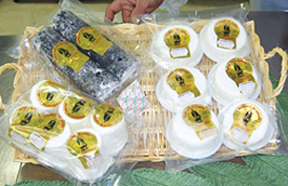 Le Père Bafien therefore needed a versatile, multipurpose and cost-effective solution that would suit the packaging needs of its numerous cheese varieties. Multisorb provided the answer with its FreshPax® oxygen absorbers and assisted the cheesemaker with technical assistance, logistical support and packaging machinery to help defray excess costs.

Says Fabien Plisson, director and founder of Le Père Bafien, “We turned to Multisorb and its sorbents because we were able to experiment with numerous packaging-line alternatives, ensuring a greater degree of flexibility for our products. We have been using oxygen absorbers to naturally extend the freshness of our products for several years now. Multisorb sorbents provide us with multiple options when packaging our cheeses.”

Currently, Le Père Bafien distributes its goat-cheese units individually, in quantities of six or more units, and also creates custom-made packaging solutions for their end users upon request. This is easily accomplished with the use of FreshPax B oxygen absorbers, a 433-cm scavenger packet that is attached via an adhesive to the clear, peelable lidding material that encompasses the entire cheese product and can be adjusted accordingly—both in terms of thickness and form—to suit desired packaging materials and sizes.

FreshPax B is designed to work with moist products such as cheese, bread and processed meats. The sorbent is activated by moisture from the food product itself. This is in contrast to Multisorb's FreshPax D blends, which carry moisture and are used with drier food products such as dried legumes, grains and dried meats. FreshPax B scavengers allow for longer handling times in the packaging process, but also begin to work within a few hours after the package is sealed. Both formulas effectively reduce the oxygen inside a package to zero within 24 to 36 hr, according to Multisorb. The lack of oxygen stops aerobic bacterial growth and other oxygen-induced chemical reactions.

Packaging flexibility, coupled with a lower cost per unit and the technical service that Multisorb and its distributor provided, were among the key reasons for the switch to FreshPax, says Plisson. “When we first worked with Multisorb, we found that the FreshPax oxygen absorber was easier to incorporate into our existing packaging than those we had used previously,” he says, “and we were able to experiment with different thicknesses to get the exact amounts of absorption necessary.”

For smaller producers, Plisson adds, a cost-effective packaging solution is key to remaining competitive both locally and internationally. With FreshPax oxygen absorbers, the packaging machinery that is used can be small and relatively low-cost compared to those of larger, industrial producers, allowing cheesemakers like Le Père Bafien to keep packaging costs down, while maintaining equivalent freshness and versatility in their packaging components.

The FreshPax B format lends itself easily to hand insertion, which can be a matter of course for smaller producers. After attaching the sorbent, the products are then sealed hermetically via a heat sealer.

In this instance, Multisorb provided the cheesemaker with the heat sealer that encloses the scavengers in an impermeable pocket. This technology, in comparison to alternative technologies such as modified atmosphere packaging (MAP), which is used by large-scale producers, was less expensive and is a more affordable alternative for the cheesemaker.

“We feel it's important to provide our customer with advice and support; whether it's in regard to cost minimization, technical issues or delivery assistance,” says John Solomon, market leader, Specialty Foods, of Multisorb. “Our role is to facilitate the incorporation of the oxygen scavenger with the existing product packaging and in so doing, enhance the appearance and taste as well.” 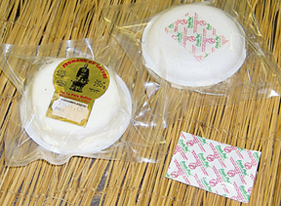 A 433-cm scavenger packet is attached via adhesive to the peelable lidding film covering the cheese.

For Le Père Bafien, a further significant difference with the use of FreshPax sorbents has been the extension of a previously short time period in which cheese products would become outdated and susceptible to bacterial contamination. Plisson says that by using oxygen absorbers in its goat-cheese packaging, the company has been able to sell its products for longer periods of time at equivalent levels of quality. This has allowed them to reap a greater financial return and sell their products farther away. “With the use of the FreshPax oxygen absorbers, we have been able to increase the shelf life from eight days to forty-five days, dramatically increasing our ability to provide consumers with a fresher product over a longer time period,” states Plisson.

The extension in freshness has also allowed Le Père Bafien to sell its products overseas, expand its distribution network and stock increased quantities of inventory. While originally doing business at a retail level, selling to local green-grocer markets, the cheesemaker now sells more than half of its products at the wholesale level. The wholesalers then sell to supermarkets and grocery stores across France, and finally to the end user. This increase in distribution has allowed the cheesemaker to diversify and improve its sales. Says Plisson, “Overall, by extending the freshness of our products, we have also been able to enhance our logistical flexibility.”

Says Plisson, “Multisorb's technical assistance and service were additional factors in our decision to use FreshPax. By being able to adapt to our needs as producers and find solutions through innovative products, Multisorb has allowed us to remain innovative as well.”