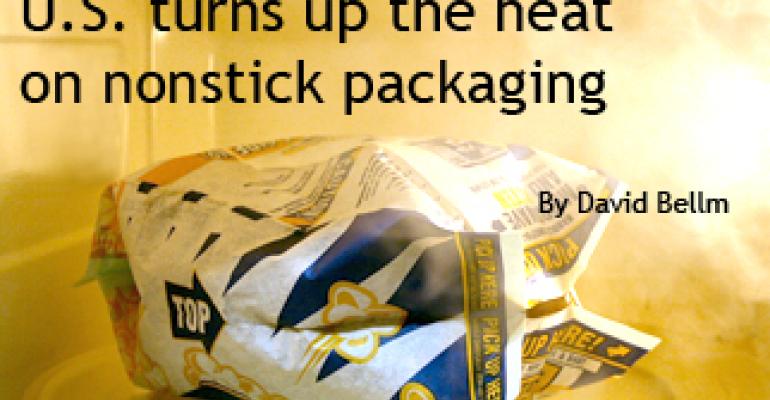 Regulatory bodies in the U.S. are increasingly concerned with a chemical commonly found in nonstick packaging, citing evidence that it’s a carcinogen that accumulates in the human body over time. Accordingly, several bans on the compound are being considered.

The chemical in question is perfluorooctanoic acid, or PFOA. It’s often found in such popular food packaging as microwave popcorn bags and frozen pizza containers.

According to a recent article in the Los Angeles Times,  the EPA considers PFOA a serious enough threat that the agency wants it to be voluntary discontinued by 2015. And such measures might not be strong enough for the state of California, which is considering a bill to ban PFOA in food packaging by 2010. According to the Times story, the state senate has passed the bill, and the full assembly will vote on it before September.

The article also says that PFOA has been found in 98 percent of Americans’ blood and in 100 percent of newborns. It is also said to build up in the body without breaking down.

Within the chemical industry, there is said to be strong opposition to the assertion that PFOA is harmful. The industry stresses that while animal tests have shown it to be harmful, human testing has been inconclusive.

The scientific community, however, argues to the contrary.

Bill Walker, vice president of the Environmental Working Group told the Los Angeles Times, "There's never been a chemical found that affects animals but has no effect on humans … I don't like chemicals building up in my blood, even when the chemical industry says there's no risk."