Spouted pouch has a 'method' for innovating soap refills 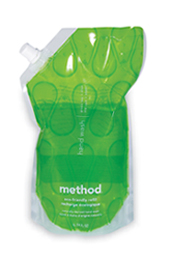 San Francisco-based Method is finding success with its innovative packaging configuration for its liquid hand soap refills. Method's refill pouch is now widely available in the U.S., and according to Method's Katie Molinari, will be adopted for other forms of their liquid soaps by March. The stock pouch is produced by Winpak (www.winpak.com). The pouch was created to serve as a refill for the teardrop hand soap bottle Karim Rashid designed. Method's design team led by creative director Stefanie Hermsdorf wanted the pouch to be translucent as opposed to opaque. “We wanted translucence because it shows off the colored liquid inside in the same way that our bottles do,” says Molinari. Method is currently working on expanding its use of the refill pouches and is also said to be working on a graphic redesign for the pouch. Addressing concerns over readability of some of the white text on the current pouches, the new pouches will be opaque white with “images of the colored bottle scattered across the front in a free-form mosaic,” Molinari says.

According to Method, the refill pouch uses 83 percent less plastic than a similar PET bottle and in turn needs less energy to produce. “Consumers are responding well to the refill and we encourage our customers to purchase refills when available as they use considerably less plastic than thick PET containers,” notes Molinari. Method hand wash refills are currently available at Target and other stores including Home Depot, Schnucks, Gristedes and others.