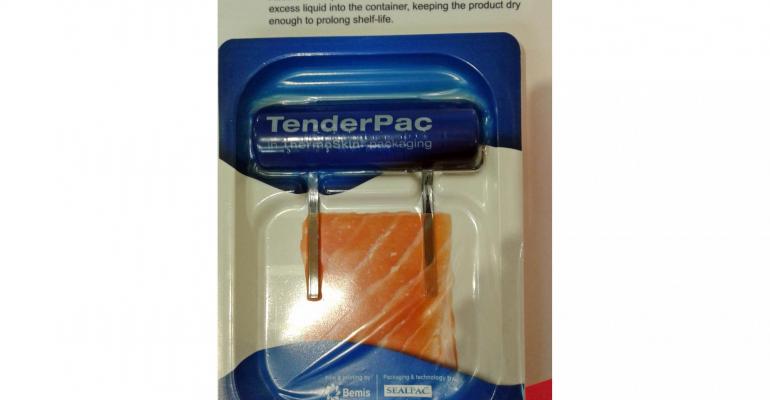 One of the interesting aspects of this packaging business is finding common ground with those in associated fields that touch on packaging. For example, I have an informal arrangement with my former colleague and foodie techie Claudia O’Donnell, a principal of Global Food Forums. She keeps a lookout for interesting packaging innovations for me while she's traveling in the U.S. and globally while I send her newsy ingredients developments. You may have caught a sample of her field work in my report on Kooee Snacks pouch-in-a-pouch packaging, a packaging innovation that she came across at a natural products trade show last year and sent my way.

More recently she came through in a much bigger way in providing me with dozens of pictures she took of innovative packaging from the Food Ingredients Europe (FIE) exhibition. It’s a show that I hadn’t heard about before mainly because ingredients-centered events are off-topic to the packaging developments that keep us plenty busy. What I learned about FIE is that it’s a huge event run by Packaging Digest’s parent company, UBM. I also discovered that this most recent iteration held in late November in Paris attended by Ms. O’Donnell had an area managed by Innova Market Insights devoted to a display of an incredible amount of packaging technologies. By incredible I mean dozens and dozens of innovations that I wasn’t aware of from my view from the middle of the U.S.

We’ll begin our FIE packaging review in this Part 1 with examples of functional food packaging, starting with TenderPac, (seen above), which boasts packaging and technology from Sealpac converted using film and printing from Bemis.

It is described as “Absorbent strips under the fish or meat product transfer excess liquid into the container, keeping the product dry enough to prolong product shelf life.”

I checked the website and discovered that the unusual pronged device that can be seen in the photo has a key function: Called at ActiveStick, it lifts the protein off the bottom of the tray to keep it from soaking in its own juices. A second compartment, separated by a porous seam and covered by a pre-printed film or label, neatly collects the meat’s excess liquid. The result “ensures that the meat is stored dry and appetizingly during its entire shelf life.”

Next: Active and optimized MAP for trayed proteins… 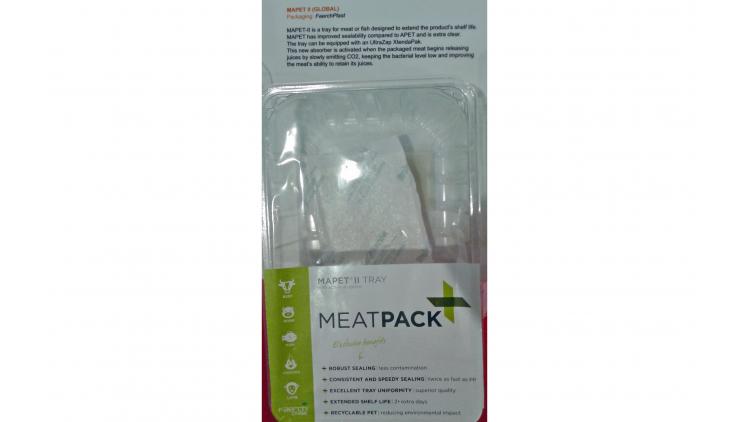 MAPET II tray from Faerchplast boasts more than improved sealability vs. APET and claims to seal twice as fast as trays made of polypropylene: it is also tailored for the company’s active modified atmosphere packaging technology. “UltraZap XtendaPak” is applicable to beef, pork, fish or chicken.

What’s nifty about the tech is that it is activated only when the packaged meat begins releasing juices, how’s that for optimization? Then the absorber slowly emits carbon dioxide to keep the bacterial level low while also improving the meat’s ability to retain its juices. Isn’t fresh and juicy why most people like meat?

For more information, visit Faerchplast. As a related aside, the company, which specializes in tray packaging, was set to acquire Sealed Air’s European Food Trays Business late last year according to the company’s website. 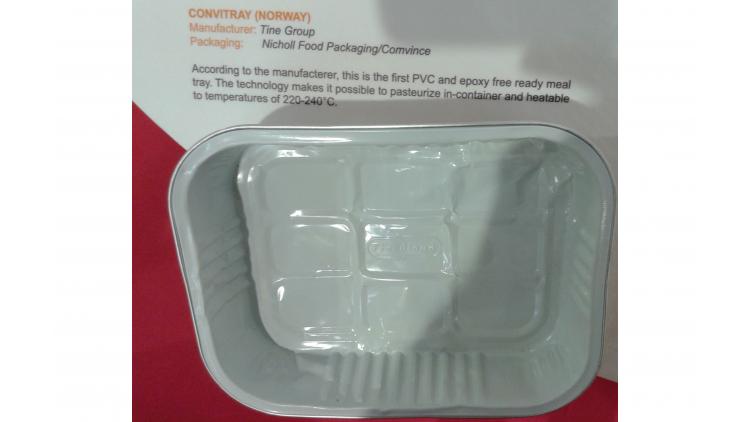 According the placard copy found in the display, the ConviTray is manufactured by the Tine Group for Nicholl Food Packaging/Comvince. The copy reads “According to the manufacturer, this is the first PVC- and epoxy-free ready meal tray. The technology makes it possible to pasteurize in-container and [is] heatable to 220-240° C.”

I found something seems amiss with the attributions as noted above, but a search for Nicholl took me to Advantapack.com where I quickly found a link to the ConviTray. There’s a downloadable PDF of the tray that you can see here.

The secret to the high heatability is that the ConviTray is made of good old high-heat reliable aluminum, but this one has a “specially developed layer that enables a tight seal” that involves a convenient easy-peal transparent lid. That means the flange provides a heat-sealable surface for film lidding, which is fairly remarkable. The tray is also suitable for MAP techniques.

The document claims that the tray can be in-tray steam processed, “which is the most secure and efficient method of pasteurization.” In a word, it is highly retortable, which is pretty much a requirement for any packaged ready meal unless it uses another method such as high-pressure pasteurization (HPP). 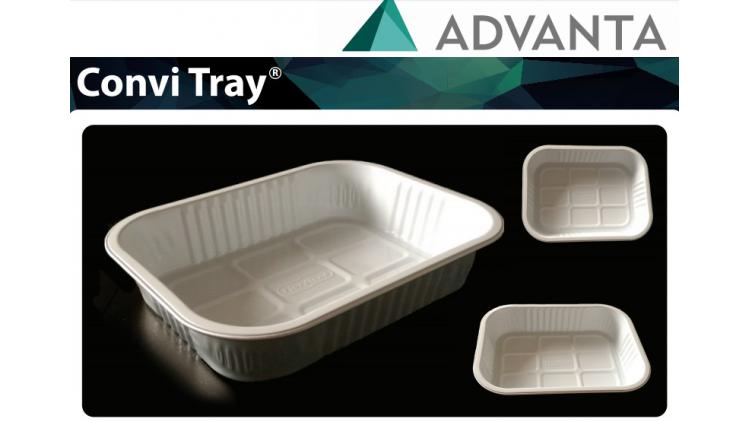 Can aluminum trays be HPP treated?
That thought sent me off on a tangent that involved an outreach to the HPP experts at Avure Technologies, who got back to me in short order with this reply that I’ve paraphrased regarding the applicability of aluminum trays for HPP: “In short, an aluminum tray would not work because it would deform and stay that way.”

I also asked Avure about the suitability of plastic tray-packed foods: “Plastic trays are high-pressure processed by CedarLane Natural Foods and others and are generally OK for HPP. However, it may take some effort to get it right by the proper selection of tray polymer, headspace and shape.”

Based on the above information, you’ve already noted a shortcoming of the ConviTray: It’s not a microwave tray. 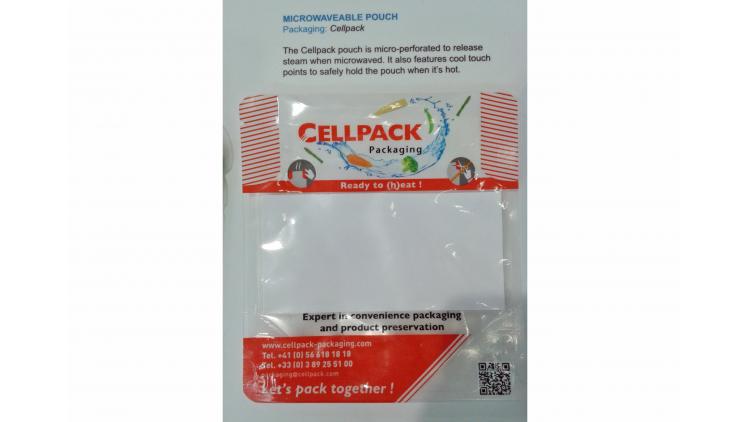 “Ready to (h)eat!” is a clever tagline for this microwavable pouch from Cellpack. The placard as seen in the above image reads “The Cellpack is micro-perforated to release steam when microwaved. It also features cool touch points to safely hold the pouch when it’s hot.”

Alas, the company’s website lacks much in the way of details, so this link is the closest thing I can point to for further information: http://packaging.cellpack.com/en/technologies-and-special-products/stand-up-pouches-flat-bags/

As an alternative, you can email the company at [email protected].