6 tips on how U.S. brand owners can get their groove back—and how packaging can help 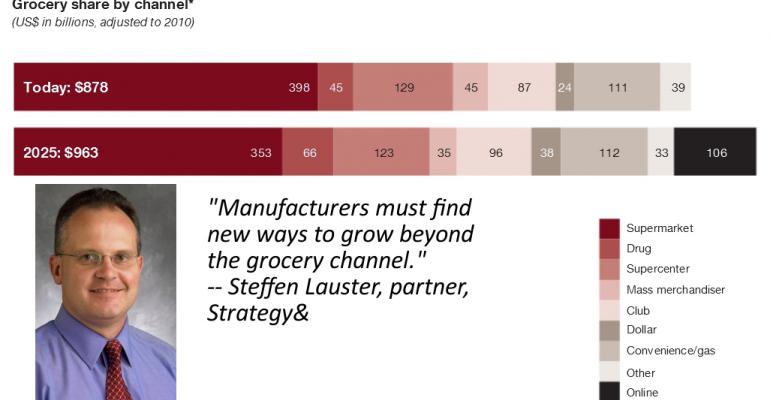 By 2025, a significant amount of grocery sales are projected to take place online.

Times are changing in the once-reliable U.S. consumer packaged goods (CPG) space. The emergence of smaller competitors, certain shifts in consumer behaviors, the proliferation of retail formats and the continued stagnation of population growth in North America have collided, creating an increasingly complex environment for manufacturers. CPG executives who had become accustomed to clear-cut distribution channels and straightforward growth strategies are now struggling to find a foothold in this volatile market.

To keep pace with previous sales growth, large CPG companies will have to make substantial changes. Some standard practices—such as large-scale investment in mainstream advertising or trade promotions—have become outmoded and will have to be rethought.

A renewed commitment to innovation is the new prerequisite for winning, and it is demonstrated by the development of more effective product portfolios, the use of cutting-edge merchandising and the flexibility to work with different retail formats, particularly online distributors. CPGs may also need to rethink overall branding to better align with consumers who are becoming more health conscious and environmentally conscious.

In short, manufacturers must find new ways to grow beyond the grocery channel.

In the recently published “How U.S. CPGs Can Get Their Groove Back” from Strategy&, a member of the PwC network, we take a look at exactly how the market has changed—and offer six strategic adaptations that can help set CPGs on the path toward a strong, sustainable future.

1. Reassess and fine-tune the portfolio. In the past, when there was a more balanced split between survivalists—consumers cutting back and looking for value—and selectionists—consumers willing to pay more for higher-quality goods—it was possible to thrive with a strategy built mostly on premium products. But today, in the era of “everyday low prices,” large CPG companies built around the appeal of premium products may have to rethink their positioning.

Of course, it isn’t enough to simply blanket the market by adding more products; rather, companies must focus on making a few carefully considered new bets, while eliminating parts of the portfolio that may be redundant or that lack a clear position. The challenge for manufacturers is figuring out exactly which products—and in which packaging formats—will maximize their sales with different consumer segments.

2. Win with complexity. For a decade or so after supermarkets lost their dominance, CPG companies had to worry about only one new format, the hypermarket, otherwise known as the big-box retailer. If a manufacturer could produce a version of its products that met hypermarket shoppers’ specifications and that these retailers wanted to carry, profits would follow. Now, manufacturers must have different versions of their products to sell in various retail formats, including club stores, dollar stores and supermarkets—along with packaging tailored to the specific outlet.

In this new market, it is no longer enough to have a highly standardized and efficient supply chain; companies also need tailored business streams and more flexible supply chains. However, maintaining these assets in parallel is a significant challenge and requires the development of an entirely new set of capabilities.

3. Develop a true channel strategy. One takeaway from the declining importance of traditional grocery formats might be that manufacturers should immediately cut back on their trade activities at these stores. But most CPG companies still have a lot at stake in their relationships with traditional supermarkets. Although they may need to move away from the large-scale investments they’ve historically made in trade promotions, they also need to safeguard near-term interests as they prepare for their next moves.

CPG companies should start shifting more of their attention to those channels most critical to them; these may be club and dollar formats or online channels. We are working with major U.S.-based CPG companies that have done just that, becoming much more prescriptive in their approach to segmentation—and in their packaging decisions to serve these segments. Their conclusions are influencing trade-spending allocations, the time and resources different accounts get, and their willingness to invest in innovation on behalf of specific formats.

4. Help your customers win through innovative merchandising. CPG manufacturers used to define innovation almost solely as product-line extensions. But this is very much a strategy for the center of the store—an area that is getting less and less traffic. The products in the middle of most grocery stores are also the products most prone to disruption from online channels. Think of how easy it is to visit a website and buy pet food, tinfoil or dishwashing liquid. Many more people will do just that in the future.

Increasingly, the important innovations relate to what’s happening on the periphery of the store. It’s where you find freshly prepared foods/meals, produce and flowers—and it’s where the money is now made in groceries. To succeed here has more to do with selling ideas and solutions than with selling items, and thus requires CPG companies to start making themselves integral to “occasions”—whether the occasion is Valentine’s Day or an everyday occurrence, like breakfast. So it plays a big deal in product differentiation.  A new packaging format can drive a lot of growth or signal a premium offering.

5. Position yourself for success in digital. Digital activity—especially through social media—has become a standard part of the industry’s consumer engagement strategy, with some great early results. E-commerce, however, is another story. The products and packages of many CPG companies don’t lend themselves to online sales because of their bulk or fragility. Still, along with club and dollar stores, online is one of the formats that must be addressed if a CPG company is to have a chance of winning in this complex retail environment.

The right approach to digital for now is to develop a flexible plan that looks out two or three years. Near-term activities would continue to involve marketing and collaborating with those retailers most likely to become extremely influential online. Initiatives that are further out can be focused on e-commerce, such as new fulfillment models or direct-to-consumer offerings. These more distant initiatives can be set up as experiments, with capabilities and investments accelerated or delayed depending on the results and the current market climate.

The paradigm is continuing to shift in digital. In many categories today, manufacturers add bulk to the product to get a consumer’s attention and to block shelf space (examples are paper products, flex pack snacks and cookies). In an increasing digital world, shipping cost will play a much bigger role and obviously product endurance to shipping. Consequently, we see a huge opportunity for packaging innovation that compresses products and makes them more resistant to damages.

6. Take new approaches to the price-pack architecture equation. CPG companies have been incredibly adept at pricing their products in ways that keep one channel from cannibalizing another. However, executives now face a problem of their own devising: the number of stock-keeping units (SKUs) at most CPG companies has grown exponentially with no corresponding increase in consumption.

In this era of complexity, radically simplifying a given company’s SKU assortment isn’t feasible. But even if companies can’t go back to offering only a handful of SKUs, they can cut down on them and home in on the smaller number necessary to succeed in their key retail formats, and to meet the expectations of both survivalists and selectionists.

All CPG companies face the same obstacles to success in North America: the bifurcation of consumer behaviors, the proliferation of retail formats, and the disruptive influence of digital technologies. To win, companies are going to have to figure out how they can play in this new world, what capabilities they’ll need, and which products and packages it will make sense for them to maintain. This is the challenge of coherence. The manufacturers that meet it will be best positioned to get back on the road to growth in the always critical U.S. market.

Steffen Lauster is a partner with Strategy& based in Cleveland, leading the North American consumer and retail practice. He is focused on strategy development and revenue initiatives, and can be reached at [email protected].