A closer look at the global food container market 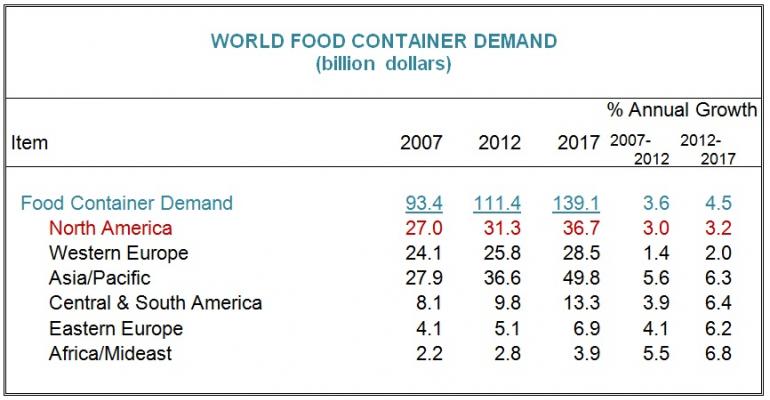 World demand for food containers is forecast to increase 4.5 percent annually to $139 billion in 2017, according to World Food Containers, a new study from The Freedonia Group, Inc., a Cleveland-based industry market research firm.

Demand increases will be especially noteworthy in the emerging markets of Central and South America, Eastern Europe, the Africa/Mideast region, and the Asia/Pacific region.

I reconnected with my former colleague at Packaging Strategies, Joe Pryweller, who is now senior industry analyst, packaging, for Freedonia. You’ll find more from the study following Joe’s exclusive insights in response to Packaging Digest’s questions.

What did you find to be the most surprising result from this study?
Pryweller: For me, the most surprising result was the rapid change in many developing countries to the consumption of processed food, much of it purchased at large supermarkets. When we envision some of these countries and regions, we think of small, neighborhood stores and even street-side vendors selling unprocessed, raw meat and seafood, nuts and seeds, produce, and bulk flour and grain.

While some of this still exists, many countries in such regions as Asia, Africa, the Middle East, Central and South America, and Eastern Europe are moving at a quickened pace to a more sophisticated economy. This has meant a swift migration to urban centers, a rising middle class, dual-income working households, and more time spent on the job and at other leisure pursuits. This has translated to less time available for cooking at home (and fewer families that want to spend the time cooking from scratch).

How has this affected packaging? Consumers in many developing countries are purchasing packaged, processed food at supermarkets, much of which is in smaller-size containers that include a host of convenience and performance features. Hence, you see demand growth for such areas as bags and pouches with an array of easy-open and self-sealing features.

Lightweighting is a greater consideration for a consumer that wants portability as part of the shopping experience. Paperboard cartons are benefiting from this trend, as are plastic rigid and flexible containers.

China is the obvious example of this trend, as the market moves to purchasing packaged goods at Western-style supermarkets. By doing so, China is expected to surpass the United States as the largest global consumer of food packaging by 2017. The trend is evident elsewhere too. India, although starting from a smaller base, will experience double digit growth in food container demand by 2017. Such countries as Brazil, Argentina, Thailand, and Turkey also are moving at a fast pace to higher-value food containers as part of a supermarket shopping culture.

How would you compare and contrast U.S./North America markets from the rest of the world?
Pryweller: The U.S. market, as well as Canada, is fairly mature in its food container purchases. Growth in food packaging demand in both countries will be close to 3 percent annually to 2017. Much of that growth will come from the continued use of premium features, such as high-barrier materials for shelf stability and unique package shapes and sizes. A gradual rebound in the economy will also support greater consumption of packaged food products and enhanced food container demand. Similar trends are seen in Western Europe, although the type of substrate used can vary by country and can be different in northern and southern Europe.

The developing regions contrast greatly with that of North America (except for Mexico, which is also considered a developing country). In many cases, food container growth is in the high single digits or more outside of North America and West Europe. Plastics is supplanting metal and glass at a much higher rate than in the US for many food products, due to its lightweight and the addition of reclose and opening features. These packages also offer more billboard space to advertise products, especially critical as large brand owners enter emerging markets.  Paperboard cartons, especially those in aseptic formats, also are achieving higher penetration rates in developing regions, even as they are flat in the U.S. market.

However, these non-US markets for food containers have one main disadvantage: food container demand is starting from a much lower base. But as these economies grow and more urban jobs are created, a corresponding shift to food packaging that can support lifestyle changes will lead to an expansion in opportunity. In many countries of the world, growing sophistication in the population has led to heightened demand for food packaging. Thailand, Indonesia, Brazil, Argentina, Russia, and many countries in Africa and the Middle East are especially poised for growth in food container demand as their economies continue to mature.

What’s a bright spot within the modest-growing NA market?
Pryweller: A definite bright spot is the continued emergence of technology introductions that will spur changes in food container demand. The packaging industry already has witnessed enhanced demand for ready-to-eat meals, microwaveable and dual-ovenable packaging, shelf stable packaging for meats and produce, and premium packages featuring sophisticated printed graphics that support marketing efforts. Over the next 4-5 years, biopolymers and advanced barrier materials should also continue to make headway in North America.

The U.S. and Canada already are global leaders in much of these developments, including the current rise of retail-ready packaging on store shelves. While some of the innovation we see in North America comes originally from West Europe or Japan, the U.S. market offers greater opportunities for growth and a further enhancement in technologies. There is a lot to look forward to in the U.S. and Canadian markets over the short term.

Any other nugget you can share with Packaging Digest's audience?
Pryweller: Some interesting trends were found in the types of products being packaged globally. A bit surprisingly, grain mill products represented the largest market for food containers. This area includes packaged rice, flour, corn meal, and pet food. While rice is used prevalently in Asian diets and corn-based products are popular in Central and South America, there is a growing movement in both regions away from purchasing them as unpacked goods from regional stores. Instead, these food items are increasingly being sold in multiwall bags and paperboard containers, enhancing the use of packaging. The rise in dual-income households in these regions increases the need to package these cooking staples in shelf-stable formats.

Look for the packaging of dairy products to offer growth in food containers, with that sector expected to rise 4.3 percent yearly to 2017. This sector will be boosted by rising dairy product output, especially in global growth for yogurt, packaged cheese, and ice cream and other frozen desserts.  Also supporting gains will be the popularity of single-portion packaging for products such as yogurt, cottage cheese, cheese snacks, ice cream novelties, and powdered infant formula. In many regions of the world, consumers are just beginning to see the advantages of purchasing convenient shredded or cubed cheese products in bags and pouches instead of buying fresh or wrapped cheese at area markets.

We have also provided some highlights from the press release below:

While the U.S. remains by far the world’s largest user of food containers, the most significant growth will occur in India and China, where double digit annual increases in food container consumption are forecast through 2017.

By 2022, China is expected to become the largest global consumer of food packaging, surpassing the US based on increasing urbanization, rising personal incomes, and an escalating interest in packaged foods.  Robust food container demand growth is also expected in other emerging markets such as Thailand, Brazil, Argentina, and Turkey.  For developed countries, especially those in North America and Western Europe, market maturity will restrict growth, but technological innovation and higher end formats will boost particular material and package types.

Their use will be bolstered by a continued global rise in the popularity of chilled and processed food, ready-to-eat meals, snack foods, grain mill and bakery items, and other products presented in flexible packaging.  Plastic-based packaging generally will offer the fastest global growth prospects, continuing to supplant metal and glass containers for many food items.  The continued emergence of quick-prepared meals and packaged cooking ingredients (e.g., cooking fats and oils, packaged spices, seeds and nuts, and single-serve noodles and rice) favors plastics over less portable alternatives.