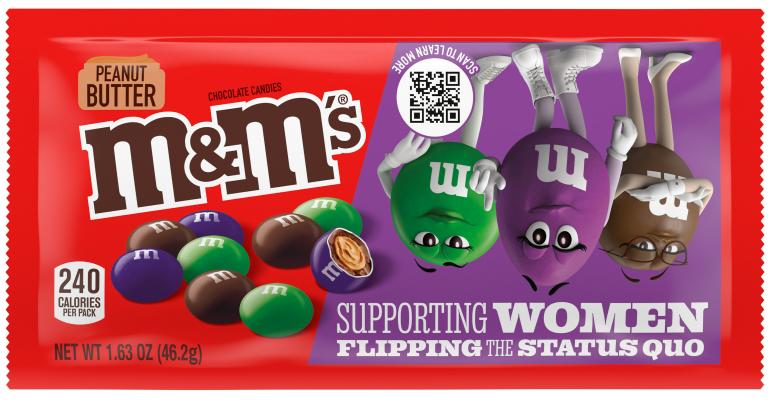 The limited-edition pack sparked fiery debate on social media from the left and the right for its gender statement.

We’re living in divisive times. It seems the one thing everyone can agree on is that we don’t agree on anything. From a social unrest and political upheaval perspective, we’ve been here before. I just re-watched The Trial of the Chicago 7 movie last night about the riots in 1968, and cried all over again at the unfairness, injustice, and nastiness in our world — from multiple sides.

In case you can’t tell, this is an opinion piece.

On January 5, we shared the news about M&M’s new package, which shows only female characters — including its latest addition: Purple. Brand owner Mars created this pack of all-female characters to “celebrate women everywhere who are flipping the status quo.” The limited-edition product features the female trio spokescandies — Purple, Brown, and Green — flipped upside down on the “inspirational” packaging. 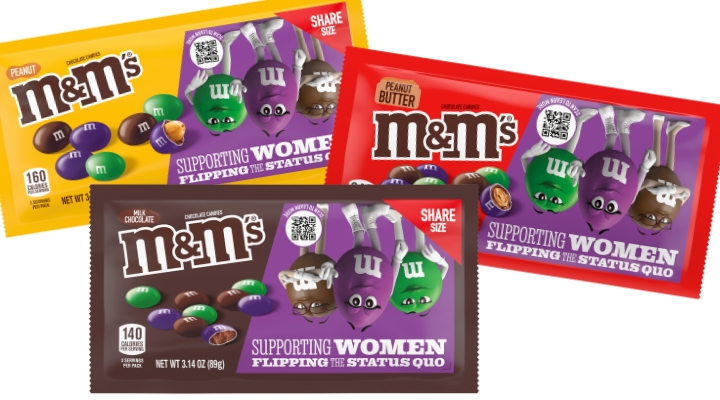 M&M’s plans to donate almost a million dollars to various organizations devoted to supporting women. That includes $1 from every pack sold, (up to $500,000), an additional $300k for donations outside of the limited-edition packs, and 10 $10k grants.

Such positive actions in the name of inclusion, right?

Not quite the reaction expected.

It makes sense that brands would use packaging to communicate with consumers on important social issues, even controversial ones like gender identify and equality.

It makes sense that brands would use packaging to communicate with consumers on important social issues, even controversial ones like gender identify and equality. Packaging is powerful for delivering messages, as well as products, because it is the one touchpoint that consumers see for sure when buying a product.

As an old-school journalist, I’m glad to see people freely speaking their minds — on this and other serious social matters. I just wish more people were listening to different opinions as well, to better understand someone else’s perspective.

Here’s a spattering of some of the more repeatable reactions to M&M’s new package. Not all of the comments on social media were family friendly. You’ll have to find those yourself.

Peak performative feminism. Now haven't all the struggles been worth it. https://t.co/GfcWRgTx8y

If it was just that they were changing the packaging I'd maybe see where you're coming from. But they're giving to charities and to individual women. https://t.co/TGwz1N8fSi

The all-female pack quickly sparked outrage on right-wing news networks & on social media. @marthamaccallum⁩ “If this is what you need for validation, an M&M that is the color that you think is associated with feminism, then I’m worried about you.” https://t.co/P9DB2necjd

(That's just RIDICULOUS! Does anyone ask questions when media presents all male packaging or all male ANYTHING, for that matter? ) Fox News host says all-female M&M’s package weakens U.S. on the global stage: https://t.co/hhBcFZYZHv

m & m’s released their all-female packaging candy. This could mean: - The box has 77% of the amount of candy compared to the normal boxes of m & m’s OR - The box will say “ just a few like you want” but in reality it will have even more m & m’s than usual

When did the US get so trivial? “The all-female pack quickly sparked "culture wars" outrage on right-wing media, notably at Fox News. One anchor at the network said the feminist-forward pack emboldens China.” Martha MacCallum lost her mind over candy! https://t.co/lOoVvMhJyb