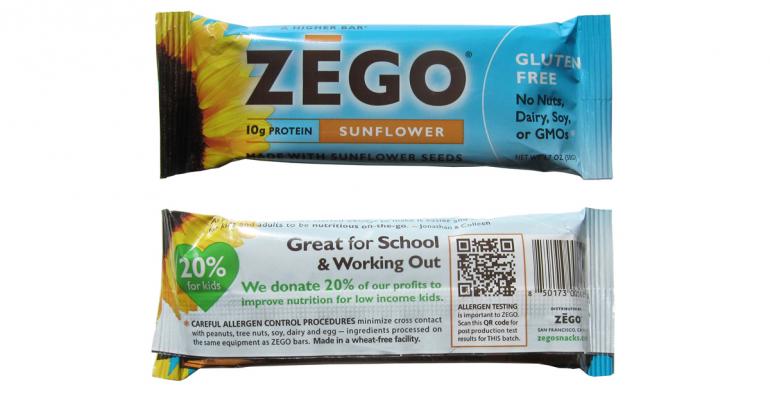 Zego leverages an interactive Quick Response code to inform consumers of the energy bars’ allergen content at the batch level.

Like most energy bars, Zego bars are made in a shared facility, where cross contact with allergens is possible, even though careful control procedures are followed. While most manufacturers simply place a generic warning of potential cross-contact on their packaging, Zego goes much further by allowing consumers to see exactly how much of a potential allergen might be in their bar’s specific batch—all with a simple smartphone scan of a patent-pending Quick Response code.

“Providing real-time data via a QR code not only informs and empowers purchasing choices, it also provides a mechanism for feedback, so consumers can tell manufacturers what matters most to them, and manufacturers can respond,” states Jonathan Shambroom, co-founder of Zego. “While sample testing isn’t a safety guarantee, it is a sea change from the status quo. Our rigorous testing, transparency and direct communication via our packaging will hopefully become the industry standard. We want our customers to enjoy the great taste of Zegos and have great peace of mind.”

“The Zego QR code allows consumers to have better control over their food safety,” says co-founder Colleen Kavanagh. “For example, knowing a ‘gluten-free’ product’s testing measured less than 5 parts-per-million gluten compared to FDA’s allowable 20ppm enables very sensitive people to make safer choices. This is even more important for those with peanut or dairy allergies, which can cause fatal anaphylactic shock.”

The QR scan leads to a specific website page showing users the measurable amounts of specific levels for six major food allergens: peanuts, almonds, eggs, soy, dairy and gluten. Due to testing and cost limitations, Zego is unable to test for walnut, pecan, pistachio, and coconut, which are also processed on the equipment, but at a much lower frequency.

The Food Allergy Resource and Research Program lab conducts the testing with a threshold of 2.5 parts per million, except for gluten, where the lowest measurable level is 5 parts per million. The confidence level is 95 percent. The tests measure the presence of a food, not the absence, so there must be a threshold amount of the food present to be measured.

Zego launched in August 2013 with an Indiegogo campaign that raised more than $50,000 to help pay for the company’s first big production run that was sold from mid-2013 into early 2014.

Zego wanted to raise the bar of information available for its consumers related to allergen levels. Initially, it looked at printing the allergen information directly on the packaging. The challenge was that, if the packaging were printed domestically, the packaging would need to be printed three weeks before the production run. If printed overseas, the lead-time stretches to several months, Kavanagh says. Either option made it impractical to have the allergen levels printed on-package.

“And by then the batch would no longer be fresh to package,” she adds.

That’s when the QR-enabled allergen information breakthrough came about.

“In the process of trying to figure out better ways to provide helpful information to the allergen community to make our product safer for them, we thought of the idea of connecting the post-production allergen testing results to the bars made from that batch with a code on the packaging that customers could access when they need it—at the point of purchase or consumption,” explains Kavanagh.

Kavanagh came up with the initial idea that Shambroom brought to life with his technical implementation. They filed for a patent as co-inventors in January 2014 with an expected 18 to 24 month approval process.

Kavanagh says the concept doesn’t specifically require a QR code, it can be any code or a data-carrying microchip—and it is highly flexible in application. “This is really about making accessible information that becomes available or important post production. We can link the information in real-time to consumers who can access and use it on the spot,” she points out.

The company would likely license the technology if they are granted the patent.

The allergen testing and QR coding was implemented for the production run of Jan. 29, 2014. Each batch of approximately 22,000 bars—one sunflower flavored and the other chocolate flavored—has its own QR code. Zego then tailors the allergen information in real-time and online at its website page specific to the batch’s corresponding QR code.

Kavanagh acknowledges that coordinating the QR code with packaging vendors was tricky. She declined to identify the packaging suppliers, but indicated that their sole film and sole carton suppliers have both worked with QR codes in the past.

“It was good to have packaging partners willing to work with a small company like ours and help make this system work,” she emphasizes. “They were very helpful in making sure the QR code was scannable and in an obvious location where it could be read.” For the wrapper, that is on back near Nutrition Facts; for the carton, it is on the side and bottom.

They were not the perfect choice because their facility processes nuts, dairy and soy, but were the best available, Kavanagh notes: “When we couldn’t find a shared facility free of the top eight allergens that could meet our manufacturing needs, we sought a copacker with a strong allergen control program already in place that was close to our offices in San Francisco. CEF filled both needs. The proximity allows us to be at every production run to keep an eye on visible allergen cross-contact potential during production. We also needed a copacker that could be flexible with our desire to use organic, non-GMO [genetically-modified organisms] and raw ingredients and would see us as a valuable client from the very early stages.”

Kavanagh sees this as a groundbreaking moment in food safety. “This is really an empowering revolution for consumers,” she says. “We think this community would be happy to spend a little extra to cover the cost of providing this information to them.”

During her research of allergens and labeling, Kavanagh was taken aback to learn that the on-package disclaimer language of manufacturers at a shared facility is completely voluntary.

“If a package doesn’t have a disclaimer on it, it doesn’t mean that the food doesn’t have potential for cross-contact with allergens,” she says, “and it actually might have more because they may not understand the seriousness of food allergies and the importance of controlling them. The disclaimer language seems like it could be potentially misleading and certainly not all that helpful. But what parents and consumers really want to know is if this particular product that I have in my hand safe for me or not. That’s complicated because people have different thresholds at which they have negative reactions to the foods they cannot tolerate or that they are allergic to. That’s why we provide our raw data, so they can make the safety call based on their unique profile.”

While there are costs associated with the testing and QR coding, there are also other potentially significant implications as well.

“Nearly all our tests have shown no measurable amounts of allergens, but what if a test shows an unexpected amount of something?” asks Kavanagh. “Do we get rid of the product? Do we add a sticker [label] to flag that? Or do we rely on consumers to check the QR code and make their own determinations? The FDA does not have limits on allergens like they do on the amount of gluten allowed in products labeled gluten-free. Because of the potential for a fatal allergic reaction, allergies are a different consideration for them than intolerances.

“This is going to be an education process both on our side and on the consumer side. We’ll work together with allergen communities to figure out what works best for them.”

Kavanagh says the initial feedback has been positive, from retailers and especially from parents shopping who are looking for allergy-friendly foods for their children.

“We’re becoming more ingredient-focused and food safety aware in American society, increasing the importance of this type of packaging,” she says. “Allergies, asthma, ADHD and autism are the new measles, mumps and rubella of our century. The number of children affected by food allergies is growing exponentially, and the consumer safety implications are dramatic. It’s no longer acceptable for manufacturers to slap a disclaimer on a package and move on. And because the FDA has not provided much meaningful guidance on allergens, the responsibility is going to have to be taken on by food manufacturers and brand owners.”

Zego bars are available at select retailers in the San Francisco Bay Area at a manufacturer’s suggested retail price of $2.89 per bar. The bars are also available in 12-count cartons, such as at retailer Amazon.com, where they were priced at $34.99.