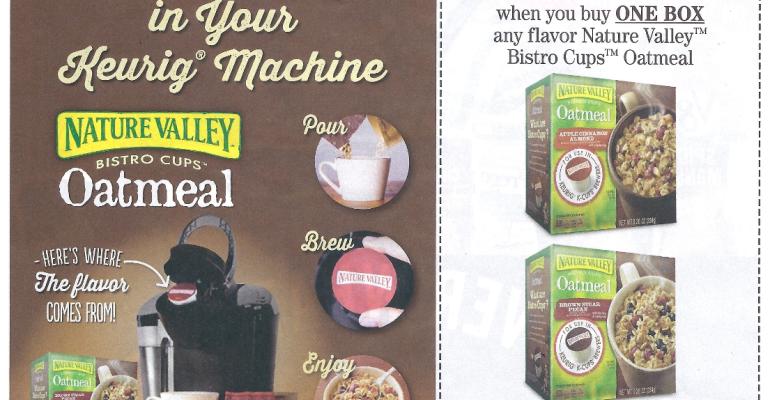 Oatmeal. It’s a good-for-you breakfast but, depending on how you make it, it can be bland and take longer to make than you typically have time for in the morning.

A new packaging format for the category has solved both these issues. The new Nature Valley Bistro Cup from General Mills is designed to make hot, great tasting oatmeal in just minutes using a Keurig brewing system.

As one female consumer says in a video on the Nature Valley website, “I have a Keurig and this would make my breakfast way quicker in the morning.” And one dad says, “My kids could make this and have breakfast ready to go for the entire family.” “That’s great. Oatmeal at the touch of a button,” says another woman.

The Minnesota food processor follows in the footsteps of Campbell Soup, which introduced soup in K-cup style packaging in the fall of 2013 for soup. Unlike Campbell, though, which partnered with K-Cup owner Green Mountain Coffee Roasters Inc., General Mills opted to use generic brewing-cup packaging.

Not to be upstaged, Green Mountain (which changed its name to Keurig Green Mountain in March 2014), continues its expansion through major partnerships. Announced Sept. 3, 2014, Honest Tea, the nation's No.1 organic bottled iced tea, will be the first brand from The Coca Cola Co. available in K-Cup packs.

Generic brewing cups for use in Keurig systems have also seen exponential growth in recent years, according to one machinery manufacturer involved in packaging products in private-label cups, Telesonic Packaging.