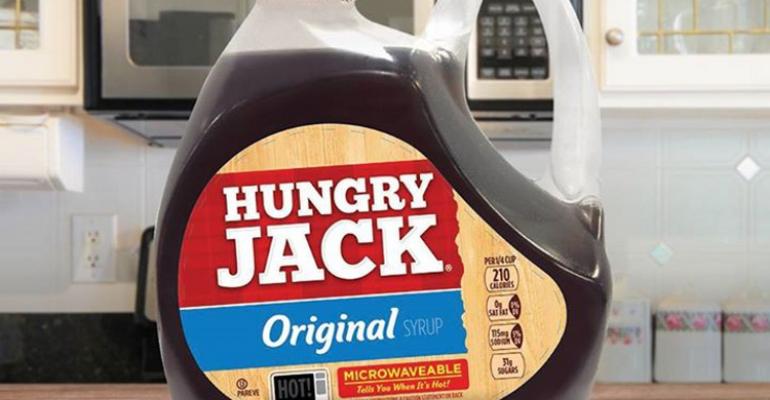 The fan-favorite Hungry Jack microwavable syrup bottle will be back on store shelves this summer.

The outcry from fans of the Hungry Jack microwavable syrup bottle has paid off. Brand owner J.M. Smucker Co. is bringing it back this summer after discontinuing it nearly one year ago in April 2014.

Within two days after posting the news of its comeback on the brand’s Facebook page, more than 4,000 Facebook fans have “liked” it and 300+ have "shared" the good news.

Facebook fan Cary Rutherford commented, “Don't understand why you changed it in first place…why mess with a good thing.” The Hungry Jack response: “The change was based on research that indicated consumers weren't warming their syrup frequently. However, we've gathered feedback from our fans letting us know how important the microwaveable bottle was to them, so we decided to bring it back!”

Microwavable convenience wasn’t the only reason consumers loved the previous packaging. The no-drip, smiley face cap scored well with many users, especially those with kids. And fans said the bottle’s squat profile fit on pantry shelves better than the taller replacement bottle.

Value plays into it for consumers, too. The short-lived taller bottle held 24 oz of syrup. The squat microwavable one holds its original 27.6 oz.

Economics may be a factor for J.M. Smucker Co., too. According to a company press release, “Third quarter net sales decreased 2% in 2015, compared to 2014, reflecting decreased volume, most significantly in the U.S. Retail Coffee segment.” Unfortunately, the company was not able to answer my questions by the article's deadline so I can’t tell you if there was a drop in sales of Hungry Jack syrup since the packaging change.

But, based on Facebook comments, chances are good that the company will be rewarded for this comeback. Bonnie Doan Olivier posted, “Thank you Hungry Jack! This is good news! You'll soon get my business back.”

Packaging Digest has also received no confirmation yet that the new package is the same as before—that is, the same bottle shape/material/handle, smiley cap and thermochromatic label. But, based on the picture, it looks like the bottle is the same shape with the cool-to-the-touch pinched handle. The front label graphics are a bit different. There is no picture of a delicious-looking pile of pancakes dripping with syrup as before—and no mention of the no-drip cap. But the familiar mini-microwave image that displays the word “Hot” when the syrup is heated is pretty prominent.

If you were one of the developers of the original packaging when it launched in the late 1990s, your baby is back!