IBC is the catch of the day 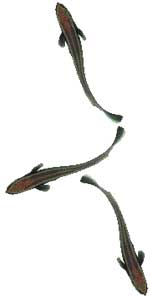 It's not easy swimming upstream when it comes to finding a new packaging concept. And Fins Technology knows this all too well. But the aquaculture technology firm, which raises live fish for restaurant sales, spawned a new packaging idea with help from SpaceKraft when it adopted intermediate bulk containers. Nurturing the young fish known as fingerlings until they're at market weight and ready to be sold to restaurant distributors across the country, Fins now keeps the fish at peak quality, arriving at their final destinations as fresh as if they were just-caught. No easy task, especially when Fins imports the fingerlings from as far away as Taiwan and Greece.

With seafood experiencing a tidal wave of popularity among food choices, Fins has seen greater demand from restaurants for more exotic fish varieties as restaurateurs are challenged to capture more market share and find new ways to sate sophisticated tastes with higher-quality fish and the freshest ingredients. However, for Turners Falls, MA-based Fins, the cost of labor and time involved in acquiring certain types of fish bordered on the prohibitive.

"Our major motivation has been labor savings, both at the hatchery level during container loading, and on the receiving side, here," Goldman tells PD. "During unloading, it's sometimes necessary to adjust the temperature, pH and other conditions in each box. There are significant savings associated with reducing the amount of individual containers with an IBC."

A bulk package would increase handling efficiency and would ultimately provide fresher product to restaurants across the U.S., the aquaculture firm reasoned. So Fins tried SpaceKraft's 1,000-L multi-ply, corrugated IBC to securely hold thousands of live fingerlings during air transport.

Finding a bigger net
Goldman says fisheries often rely on much smaller containers than a 1,000-L IBC, especially within the shellfish industry, but that could be changing. Seafood processors and wholesalers are starting to look into bulk totes to streamline distribution. But there can be caveats, he says. While rigid stainless-steel totes were reusable, they were too costly to maintain and store.

"When we first approached hatcheries in Greece about this, they turned us down. "Fingerlings [from that country] are usually shipped in small foam containers, each carrying about 150 fish–we, however, expected to import about 100,000 fish per shipment. To count, pack and ship that many fish in conventional, two-gallon foam boxes would require an exorbitant amount of time and labor, so they weren't interested."

What's more, because the tasty cobia, one of Fins' latest offerings from the gulf of Florida, don't swim in groups that can be netted all at one time, they are difficult to catch in significant commercial quantities. Thanks to Fins' high-tech farming system and SpaceKraft's tote, diners will be able to find cobia on more menus.

Fins began receiving the IBCs from hatcheries last fall. Protective of the thousands of fish and liters of water inside during shipping, the tote is collapsible and, best of all, can hold about 6,000 live fingerlings versus 150 held by the small boxes.

SpaceKraft produces the containers using a patented technology that winds eight plies of single-face A-flute corrugated (69# linerboard and 33# medium) into a seamless outer shell that eliminates the manufacturer's joint (sometimes a weak link), as well as any metal staples and wood components.

With 30 tons of compression strength, the rectangular outer container, which stands 44 in. tall, is then placed on a 44 x 44-in. pallet for filling. Goldman says that though the IBCs are thick and inherently well-insulated, as an extra precaution, the hatcheries line the corrugated container with foam panels obtained locally to keep the water temperature from changing dramatically in flight as they're transported to the Massachusetts aquaculture facility.

Topped with a corrugated cap, the corrugated IBC holds an inner film bag liner from Scholle that SpaceKraft furnishes within a prefolded, corrugated cassette for quick setup. The replaceable film bag is made of a three-ply construction including two 4-mil layers of linear low-density polyethylene laminated to an outer 4.3-mil coextruded biaxially oriented nylon layer. The bag measures 40 x 40 x 40 in. Snouted at the top, the bag has a wide mouth for easy filling.

Catch of the day
"When I went back to the hatcheries with the idea to use this tote, they were immediately ready to give it a try," Goldman says. "Now, they like the container so much, they're using it themselves to transport locally."

The IBCs are shipped knocked-down to Fins' suppliers and bundled 50 per pallet. To fill them, hatchery personnel square up the outer corrugated container on a pallet, insert the foam and place the cassette inside the container. Setup takes about two minutes. The snouted bag is then placed around a pipe that will pump the fish from a main tank into the bag. Fins says the hatcheries use what it calls a dry-weight sampling method to determine the number of fish dispensed and to gauge how many pounds of fish can be filled into a container. When the bag is full, the spout is wrapped around itself and tied closed, and the corrugated top cap is put into place. The tote is then strapped, transported by truck to the airport, and flown to Turners Falls to Fins. The entire process from hatchery to farm takes about 24 hours. "We typically receive about six IBCs per shipment, though this is still reflective of the development phase," Goldman says.

Once the shipments of fish reach Fins' facilities, the fingerlings are removed from the container and stocked into 3,000-gal "nursery" tanks, where they're fed a diet rich in vitamins, fish meal and nutrient-rich grains, Goldman notes.

After 60 days, the fish are large enough to be transferred into a 10,000-gal tank for another 60 days. They then progress to a 30,000-gal tank and then a 140,000-gal tank, where they mature until ready for sale. Finally, the fish are plunged into an ice bath, which eliminates the release of enzymes that can lead to tissue deterioration. The fully matured fish can then be trucked to specialty seafood distributors as chilled fish for use by restaurants across the U.S.

Reeling in the benefits
The 1,000-L IBC has become quite a catch with Fins' suppliers, Goldman tells PD. They're moisture-resistant, insulative and protective. And using one cuts labor and material costs versus handling and shipping as many as 40 small boxes of fish. Fins expects to harvest further benefits, Goldman says. "We're proud of the freshness of our fish, as well as in the new varieties we're able to offer."