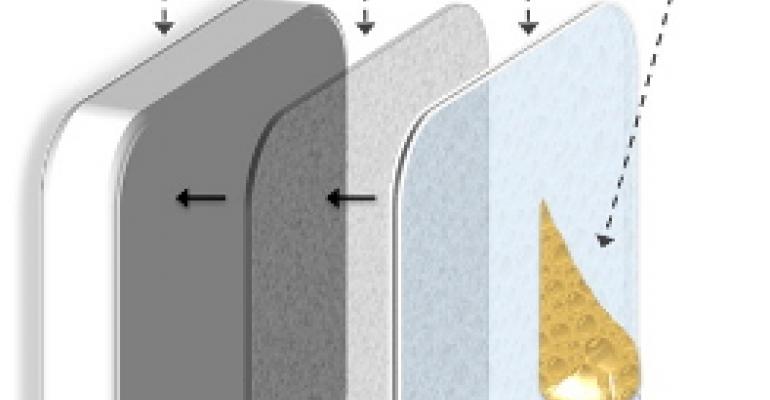 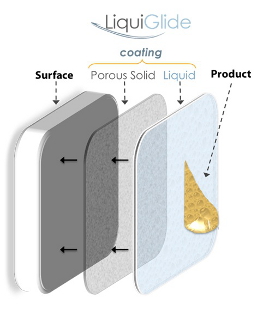 Who hasn't lamented at those last portions of mayo clinging to the interior of a jar or a Heinz 57 sauce that's so thick it becomes increasingly difficult to dispense the flavorful condiment as the volume dwindles with use?

So tantalizingly close, yet frustratingly inaccessible...for now.
Some product waste that has been previously thought of as unavoidable may not be so elusive with LiquiGlide, a technology developed at the Massachusetts Institute of Technology by five students and professor Kripa Varanasi.

Developed in the Varanasi Research Group at MIT, the coating is made from nontoxic materials and is easily applied to food packaging.

Industry Intel reported in mid-2012 that MIT's "LiquiGlide coating is so slippery it allows all condiments to pour from the bottle. When applied to the inside of a bottle, the walls are so lubricated that sauces that would have normally stuck to the insides almost fall out.

"The team estimates, that with this innovation, they would be able to make a dent on the estimated 1 million pounds of global food waste thrown out each year. In addition, they would eliminate the need for large squeeze-bottle caps, saving about 25,000 tons of petroleum-based plastics annually.

According to MIT PhD candidate Dave Smith, LiquiGlide is almost like a structured liquid, because it is both rigid like a solid, yet lubricated like a liquid."

A composite of solid and liquid

What is LiquiGlide? Here's the official description: "Liquid-impregnated surfaces are a patent-pending, super-slippery surface technology that comprise a composite of solid and liquid materials, where the solid holds the liquid tightly at the surface and the liquid provides the lubricity."

Reportedly the initial application was aimed at coating car windshields, but it works equally well on many surfaces from airplane wings to containers made of glass, plastic, metal and ceramic, which covers a lot of ground in packaging for foods and other products.

The LiquiGlide website also offers this: "Application-specific custom formulations of the coating are created, so for food packaging, the coating is made from FDA-approved, edible materials."

Interestingly, the coating can be engineered to control the speed that the object, liquid or material slide over the surface by changing the materials or structure of the coating. Thus, LiquiGlide can be tailored for the container type as well as for the product the customer wants to have slide more easily out of the container.

It is so uniquely utilitarian that LiquiGlide has deservedly garnered a case load of high-profile accolades, including in late 2012 when it was recognized by Time magazine as one (of 26) of the Best inventions of 2012. Forbes also named it one of the best food inventions of 2012.

We reached out to the MIT LiquiGlide contacts a number of times by phone and email, but were unable to gain feedback for an update at press time.

However, we did uncover a technical paper published in February 2013 in the technical publication Soft Matter (2013, 9, 1772) from RSC Publishing entitled "Droplet mobility on lubricant-impregnated surfaces," which credits half of the same team members cited in the LiquiGlide literature including lead Varanasi.

In the introduction, it provides background on a method-and the difficulty-of entrapping air pockets in a structured surface to enhance the sliding properties of materials. The paper offers a solution that involves "surfaces containing pockets of a lubricating liquid rather than of air. Stabilized by the capillary forces arising from the microscopic texture, the lubricant lets the droplet above it move with remarkable ease." It also is stated that such non-wetting surfaces can provide self-cleaning properties.

These details simply underscore the fact that LiquiGlide is a slick development.

Apart from consumers' ongoing frustration at not getting those last dabs of condiments from containers, the buzz for this out-of-the-box (bottle?) development could not have come at a more opportune time when the food industry is taking an ever closer look to reducing waste.

At year's end, one national consumer research organization, the Values Institute at DGWB singled out Food Waste Consciousness as one of its top five health trends predicted for 2013.

Deep in the supply chain

And just last month, a new global campaign to cut food waste was launched by the U.N. Environment Programme (UNEP), the Food and Agriculture Organization (FAO) and partners: The Think.Eat.Save. Reduce Your Foodprint campaign, which is in support of the SAVE FOOD Initiative to reduce food loss and waste along the entire chain of food production and consumption.

It's at that last portion of the supply chain where the value-add of processing, packaging and transportation magnifies the cost of waste versus losses farther upstream, opening up food for thought for an option like LiquiGlide.

Regarding the costs of using the material, LiquiGlide marketing managerLeslie Roseinforms PD that "LiquiGlide is a customizable platform technology, so it is difficult to estimate a price as each application is different."

It is conceivable this technology may be sliding into our futures faster than we think.