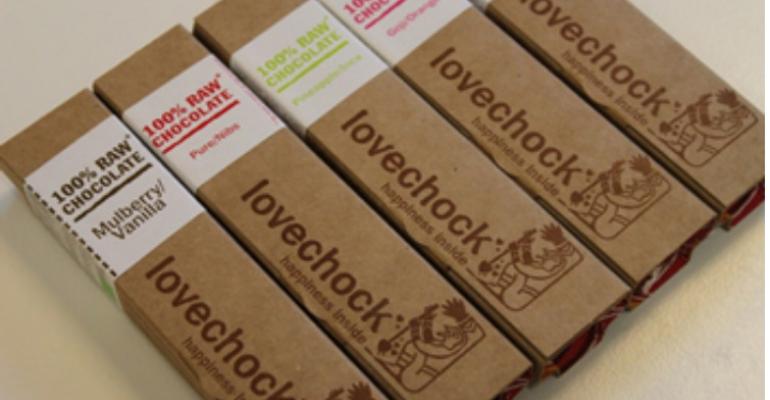 What’s more natural than “Dutch” and “chocolate”? Maybe it’s the packaging for Lovechock, a high-quality organic chocolate bar from Dutch entrepreneur Laura de Nooijer. Inspired by the uplifting qualities of cocoa, which contains phenylethylamine, a substance popularly known as the "love drug," Lovechock is lovingly made by hand with "happiness inside."

Speaking at the Bio!Pac conference for bio-based packaging taking place on May 13 and 14 in Amsterdam, Ms. De Nooijer talked about how she turned her idea for a chocolate bar made of raw, unroasted cocoa beans into a successful brand with international success in the organic market. Next to what she called the magical power of love in raw chocolate, an important part of her product was the packaging, she said.

"Working with a company called ProudDesign, we originally developed a plain packaging made with PEFC paper, two plastic bands and aluminum foil. However, we felt that the aluminum wrapper and plastic bands did not reflect the spirit of the product. So we redeveloped it."

The aluminum foil was eliminated and substituted by Innovia's Natureflex film, based on dissolving wood pulp, typically sourced from hardwood species such as eucalyptus. Natureflex is certified as industrially and home compostable and is marine and wastewater biodegradable. The outer wrapper was redesigned with a tab, instead of the plastic bands, as a result of which the packaging also became reclosable. Only organic inks were used for the wrapper print.

"Raw outside, wow inside," was how Steven de Cleen, of ProudDesign put it. "Seduce first, then convince. After all, we can't compete on a biobased foil wrapper alone—we have to create a value that is bigger than the wrapper.”

Read the full article at PlasticsToday.