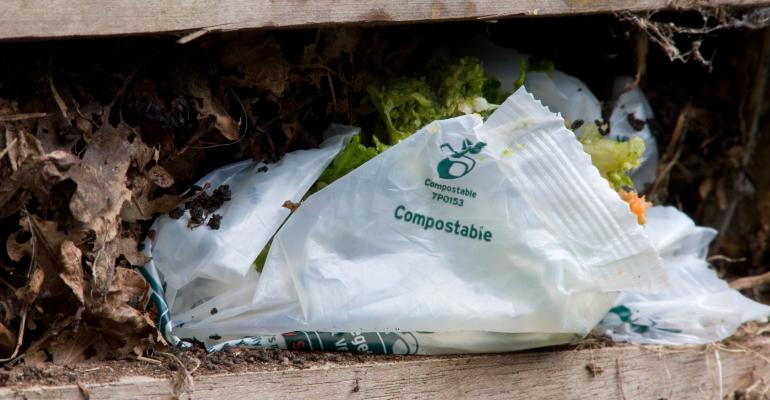 Compostable packaging is not THE answer. But it is AN answer.

Over the past year, I have been in a running debate with SPRING Subject Matter Expert Dr. Ramani Narayan, Distinguished Professor at Michigan State University, regarding the value of compostable packaging. Dr. Narayan is Technical Advisor for the Biodegradable Products Institute (BPI); Technical Advisor to the World Wildlife Fund (WWF) BioPlastic Feedstock Alliance; convener/technical expert on ISO and ASTM Standards committees; and advisor to European Union certification organizations and the USDA BioPreferred program. Whew!

Narayan is a believer in the value of compostable packaging. Outside of a few specific applications, I am not. After rebutting one of my recent LinkedIn posts on the subject, I thought it was time to see if we could reconcile our differences. We spent an hour on the phone hashing out our beliefs, differences and similarities. We used as much data as possible to back up our thinking.

Rarely have I come away from a discussion with such a clear perception of the current reality of a topic. I believe we both developed slightly different, and I’ll venture to say, revised perceptions, regarding the future role of compostable packaging in the effort to reduce greenhouse gas generation in the packaging universe.

Let’s start with some facts about landfills.

The largest contributor to landfill discards is organic waste. The latest estimates (2018) from the Environmental Protection Agency (EPA) are that one third of landfill discards are food (22%) and yard trimmings (11%). In fact, interest in composting, which started to take hold in the late 1980s or so, was really about diverting waste from landfills (which were expected to overflow and bury us), rather than in creating soil conditioners and fertilizers.

Landfills are designed to be tomb-like, with little exposure to air, water, heat, and light. In the anaerobic (non-oxygenated) conditions found inside, organic waste will slowly break down to create both methane and carbon dioxide. The atmospheric heat trapping impact of the former gas when it enters the atmosphere is reported by the EPA to be 18 to 36 times the impact of the latter gas. Thus, while carbon dioxide is more plentiful in the atmosphere, the presence of methane may actually be more detrimental.

While the methane generated in landfills can be tapped to be produce energy, the landfills must first be capped and taken out of service before capture can begin. Thus, currently operating landfills are significant sources of atmospheric methane — 15% of US methane emissions and the third largest source of the country’s methane emissions (EPA, 2019).

Unlike landfills, which produce anaerobic biodegradation, industrial composting is an aerobic process, requiring the presence of oxygen to drive the appropriate chemistry. (Compost piles are regularly turned over to add oxygen to the mix.) For reference, aerobic processes produce water vapor and carbon dioxide, but not methane. However, they can produce ammonia, which is also a greenhouse gas.

The industrial process is simply a faster way to achieve what Nature does with all spent organic materials. In fact, compostable biopolymers that are used for packaging and then biodegraded in industrial composting facilities mimic nature’s carbon cycle: Plants photosynthesize atmospheric carbon dioxide, turning it into cellulose and other carbohydrates (such as lignin). When biodegraded in industrial facilities, packaging produced from cellulose and other certified compostable biomaterials return this carbon to the atmosphere, finishing the cycle.

The key to reducing, mitigating, or reversing increases in greenhouse gas generation lies primarily outside of the natural loop, with the reduction of energy production from fossil fuels. 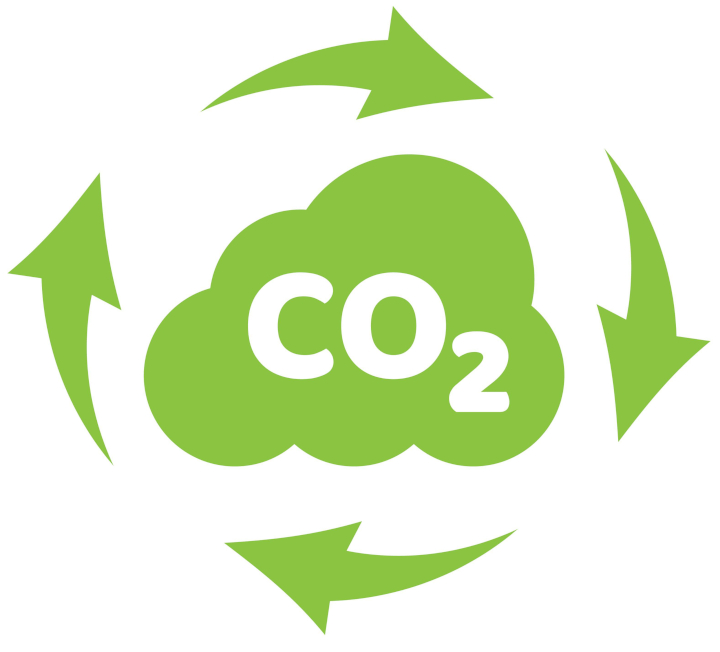 If we consider the carbon cycle to be an ongoing natural process, the key to reducing, mitigating, or reversing increases in greenhouse gas generation lies primarily outside of the natural loop, with the reduction of energy production from fossil fuels. The use of these fuels is a completely man-made construct that lies outside of the carbon cycle used by Nature to take carbon dioxide from the atmosphere, generate plant growth, and eventually return it to the atmosphere once plants die. (Ironically, when photosynthesis produces cellulose, its waste products are oxygen and water vapor. We owe our existence to plant waste!)

Carbon dioxide can thus only be classified as a pollutant when Nature signals that its overabundance will cause or exacerbate climate changes that make the planet uninhabitable for humans. Even then, and as said above, this concept of carbon dioxide as a pollutant is a purely anthropomorphic perspective.

The natural carbon dioxide cycle of creation and biodegradation is not enough by itself to recommend the use of compostable packaging.

The natural carbon dioxide cycle of creation and biodegradation is not enough by itself to recommend the use of compostable packaging. Unlike composting, mechanical recycling both maintains the circularity of plastics and significantly reduces greenhouse gas generation vs. the use of virgin materials.

The most promising use of compostable packaging lies in food applications, especially at foodservice locations such as school and institutional cafeterias, sporting events, concerts, restaurants, and similar venues.

The most promising use of compostable packaging lies in food applications, especially at foodservice locations — such as school and institutional cafeterias, sporting events, concerts, restaurants, and similar venues — for these, and other, reasons:

• The ability to compost the packaging right along with the other organic materials (such as food waste) with which it is collected. Creating a single stream reduces the duplication and resulting inefficiencies of containing, sorting, and transporting two different streams to different locations requiring different processes.

• The reduction in packaging that is sent to landfills, due to food waste contamination. Foodservice packaging that might be recyclable in dry conditions (made from PP or PET, for example) is generally not recyclable once contaminated with leftover food that remains in the packaging when sent to recycling facilities.

• The efficiencies associated with having relatively large amounts of food waste and packaging collected in centralized locations. Collecting residue from thousands of people in a single location is significantly easier to handle than having the same residue processed from thousands of homes.

The findings provide key insights and conclusions about compostable packaging.

1. Consumer packaged goods companies (CPGs) may see compostable packaging as a way to maintain the status quo by generating consumer and legislative acceptance without the need to take responsibility for packaging end-of-life consequences. After all, there are no deposits required. No need to source post-consumer recycled (PCR) materials. And no need to deal with the supply-and-demand pricing fluctuations in the secondary materials markets.

Knowing all this, my advice to you is fourfold:

1. Only packaging that meets standards similar to Federal Trade Commission (FTC) requirements for recyclability claims should be allowed to make general, broadscale compostability claims. Thus, to claim compostability, at least 60% of American households must have easy access, either at curbside or via local dropoff, to industrial composting facilities.

Further, any package that claims compostability must be certified by organizations such as BPI or the German technical inspection association TUV, after meeting the proper ASTM, ISO, and/or EN standards, as tested by approved labs. We also recommend that the US Composting Council provide its own guidelines and approvals, similar to those provided by the Association of Plastics Recyclers (APR) to the plastics recycling supply chain.

2. Use science and financial accounting to determine the relative economic, environmental, and social value of using compostable vs. non-compostable materials; and do so on a local or regional application-by-applications basis. From a circularity basis, mechanical and/or chemical recycling should generally be the goal of packaging recovery efforts. These two recycling strategies both “keep the molecule in play” and have the potential to reduce the generation of greenhouse gases. (Remember, composting creates greenhouse gases.)

That being said, compostable packaging has its place, especially in food delivery applications where the financial and/or environmental lifecycle costs are less than the costs of recycling or, ultimately, landfilling. 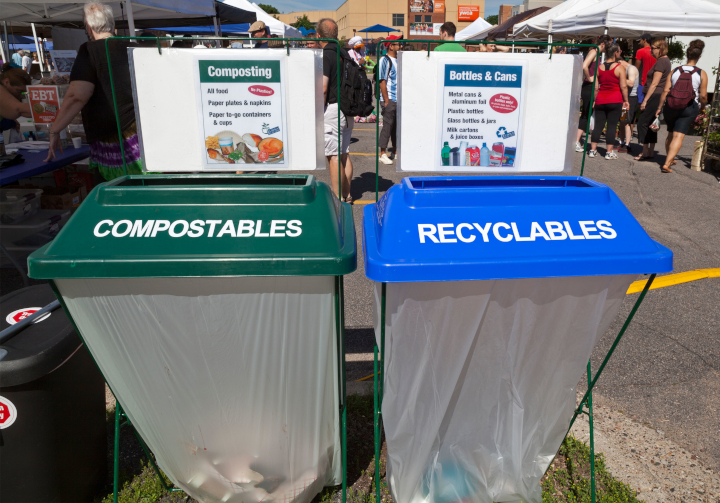 3. Focus initial compostability efforts on high-volume opportunities first, such as outdoor sports and music venues, school cafeterias, and other aggregated foodservice preparation and serving facilities.  The economics, and thus the overall effectiveness of composting, favor this approach. It will also help educate consumers about the value of composting and might help to promote similar residential programs.

4. Require investments in broadscale industrial composting infrastructure by the entire packaging supply chain. Whether through collection fees, property taxes, extended producer responsibility (EPR), or other eco-modulation policies, all links in the compostable packaging chain should invest in post-use activities, thus reflecting both the economic and social value, along with the environmental costs, inherent in the process.

These recommendations will help ensure that compostable packaging is used where it can actually enhance sustainability, primarily in food-related applications. Implementing these strategies can also help to avoid similar problems that are befalling the mechanical recycling of plastic packaging; and the negative reactions by consumers, regulators, legislators, and the media.

While I don’t totally agree with Dr. Narayan’s views on this subject, I do agree with much of it. Here’s his overall assessment of compostables: “There are misleading and over-reaching claims on biodegradability and composting, but it is equally true of recycling claims. Innovating away from carbon-carbon hydrocarbon plastics to new molecules that are truly compostable or easier to depolymerize chemically or biologically, or will not persist if leaked into the natural environment, is not receiving due attention.”