Imagery courtesy of Scan of the Month 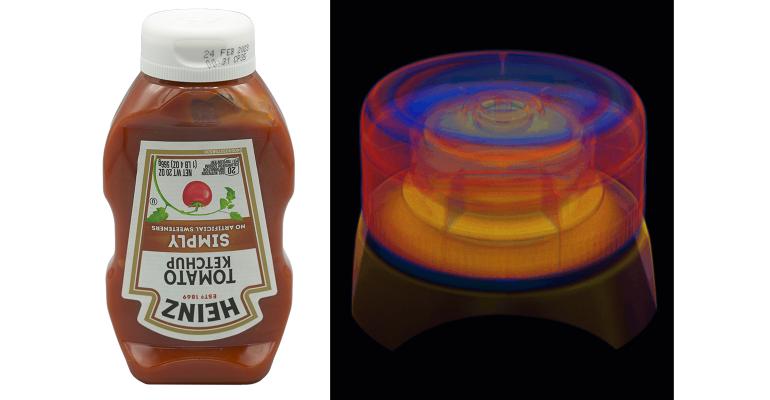 A literal inside look at an inverted Heinz ketchup bottle's plastic fitment.
Common food and beverage package fitments seen in full-color 3D radiograph GIFs are as fascinating as you’d imagine.

Ever wonder what it would be like to have Superman’s x-ray vision so you could see through doors, buildings, and more?

What if that super-power was used on packaging?

That’s exactly what happened a few weeks ago at the recently launched website, Scan of the Month. The homepage provides a succinct summary: “As engineers, designers, manufacturers, and restless people, we used a CT scanner to scan a loaf of bread. That one scan has opened an entire world of exploration and a deeper understanding of the inner workings of life around us.”

Common products the Scan of the Month has turned its x-ray vision to include Lego Minifigures, Airpods Evolution, Gameboy Compendium, and Instant Cameras. Then came March, the subject of which hit an editorial bull’s eye: food packaging. The scanned samples comprised an inverted bottle of Heinz ketchup, squeeze bottle of Sirachi Hot sauce, and an outlier beverage packaging mentioned below.

Scan of the Month

Composite scans of a Heinz closure seen from side and top becomes a psychedelic work of art.

As you can see, the colorful and highly revealing results focused on the containers’ highly engineered plastic fitments.

Scan of the Month relies on Computed Tomography (CT) scanning, according to spokesman Drew Parrett, who informs us it’s “a process of collecting x-ray images, called radiographs. These are then reconstructed into a 3D volume.”

For the layman that means that the results are captivating eye candy of 3D-rendered GIFs that rotate as you watch.

The site launched five months ago with scans of Legos Minifigures, which proved an instant hit. “It was surprising how large the response was, especially considering it was a cold start to the website,” Parrett says.

Why turn your attention to food packaging?

“The more we CT scan things, the more we are realizing there is surprising engineering and manufacturing that is easily overlooked,” Parrett responds. “On a whim, we hit up a CVS Drugstore and grabbed a couple of everyday items. It turned out they were fascinating.”

I couldn’t agree more — the CT scans turn the ordinary into the extraordinary.

Website enthusiasts have made the food packaging scans another hit and with a week left in the month.

“It’s been really popular!” exclaims Parrett. “For instance, I believe over 300,000 people saw this on Reddit.”

When asked which of this month’s scans he liked best, Parrett picked the only beverage of the group. “The Vita Coco cap is just wild,” he responds. “The nested cap design with a hidden hole saw is just wild to me.” It's shown at the left.

If like me you wondered what that meant, it’s explained at the site and in Scan of the Month’s post at Reddit: “An industrial CT scanner created this 3D CAD model of a Vita Coco bottle cap, showing a complex assembly of cams, followers, and saw blades that [cut]open the foil seal when the cap is turned.”
These guys know what they’re seeing. It also emphasizes that the fitments, closures, and dispensers we take for granted are small marvels of engineering.

The concept and execution of Scan of the Month are impressive. As well, the copy that accompanies the visuals isn’t just informative, it’s insightful, altogether making for an edutaining experience. See for yourself at Scan of the Month.