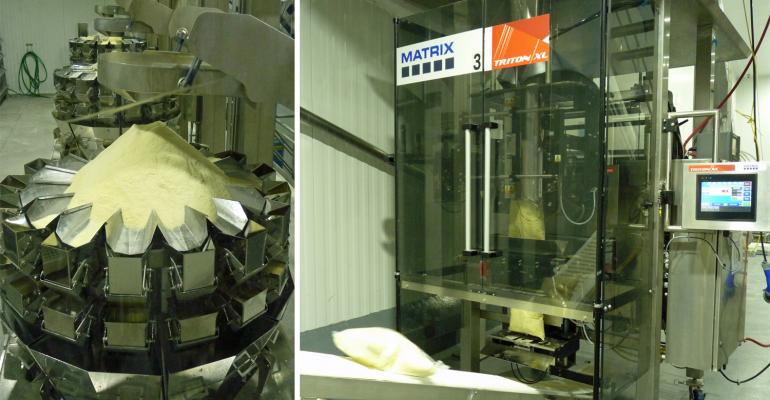 Baggers are paired with 16-head computerized weighers across three lines.

There are packaging material converters and then there are cheese “converters” like Cheese Merchants, which slices, shreds, grates, shaves or grinds about a dozen different types of cheese to order. The company then packages the cheese into rigid and flexible formats.

In 2014, the company relocated to a new 277,000-sq-ft facility in Bartlett, IL, that doubled its size. In conjunction with the big move from one Chicago suburb to another, the company added three new vertical form/fill/seal (VFFS) machines paired with computerized netweighers that have become the higher-speed anchors to its bagging operations that run 24 hours five days a week. The increased speed of the new machines combined with the output of the older machines installed in an adjacent area have more than doubled its under-roof bagged-cheese production capability.

The relocation to the new facility was liberating for the growing company. “The difference between the old building and the new one is that, in the old building, we built the processes around the constraints of the physical structure. But this time, we bought a shell and designed the inside around our processes for greater production efficiency,” says Rob Arko, facilities manager.

It was director of purchasing and quality assurance Paul DelleGrazie who led Cheese Merchant’s packaging vetting process by sending a small team to Pack Expo 2012 in Chicago to assess options in VFFS machinery.

The experience was eye-opening, according to DelleGrazie. “We knew little about baggers—other than the machines that we had—and didn’t realize all the options that were available.”

That led to the selection of Triton XL baggers from a new-for-them machinery vendor: Matrix, a division of Pro Mach. 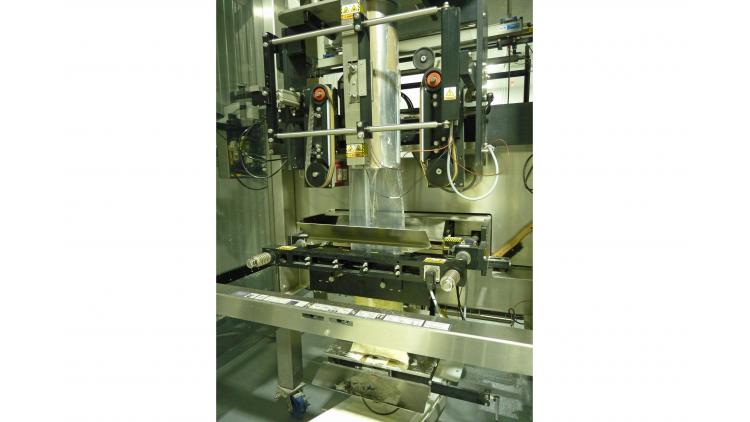 A look inside: The form/fill/seal machines’ 18-inch sealing jaws permit bags from 1 to 25 lbs to be produced while a nitrogen-flush provides the refrigerated cheese with a 90 days’ use-by shelf life. The baggers are equipped with high-accuracy microstepper drives.

Next: Controls and components. 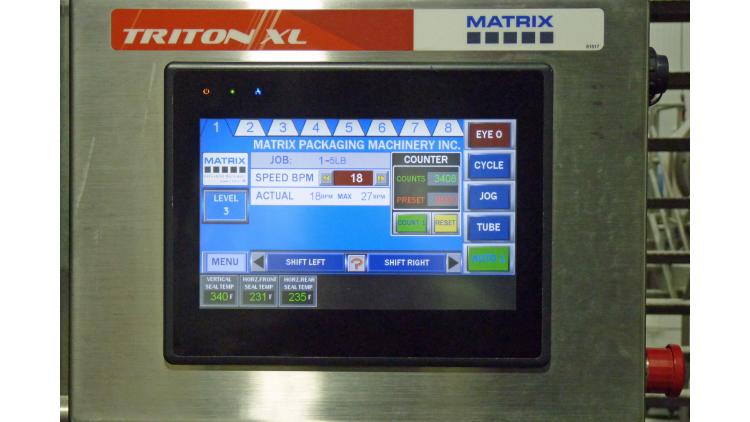 Human-machine interface offers touchscreen simplicity and instant access to 300+ screens that have won the appreciation of operators.

What DelleGrazie likes most about the new baggers is their simplicity, which he compares to his beloved Apple brand computer products. “With the software and controls, from the menu interface and to the way the machine is laid out, they are a lot easier to operate than other bagging options we had,” he says. “Operators love the new baggers because they don’t have to jump through hoops as with the older units. We felt they were going to work great and, for our operation, they really have.”

According to Matrix automation expert Michael Krummey, the 1400 represents the latest release in the MicroLogix family of software that has evolved over the past 15 years. “The benefit of that is the customer has a great deal of support available,” he points out. “It also allows us to preprogram virtually all of the possible features and options in these machines.”

The human-machine interface (HMI, shown above) offers nearly 300 screens. “Many of these are online help screens, available at the touch of the ‘question mark’ button, which appears on every screen,” says Krummey.

Big bags require big sealing jaws, which is why DelleGrazie says the most important optional feature they selected were larger 18-inch sealing jaws. That gives them the capability to run anywhere from 1-lb to 25-lb bags “without having to make any ‘crazy’ changes to the bagger,” he says. “There are many less headaches with these jaws than we had with the old baggers—the difference is like night and day.”

“It’s essentially an encoder-less type of servo-mechanism that uses micro-stepping technology that was pioneered about 15 years ago,” explains Krummey. “We started using it more than 10 years ago because of its reliability and its ease of maintenance. It offers the same accuracy and repeatability of a servo-drive.” 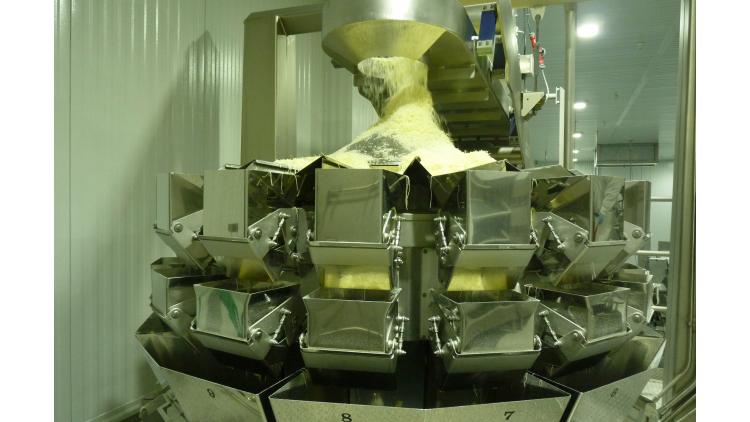 Mounted atop each bagger is a 16-head Yamato computerized netweigher that, on the surface, provides a 60% increase in capacity versus the 10-head units on the old systems. “That means more accuracy,” says DelleGrazie, “so that’s definitely improved a lot.”

DelleGrazie pegs fill accuracy at 99% versus the older machines that were “in the 90s. It’s a really a huge difference for us,” he adds, “and the buckets are so much easier to calibrate and to clean.” 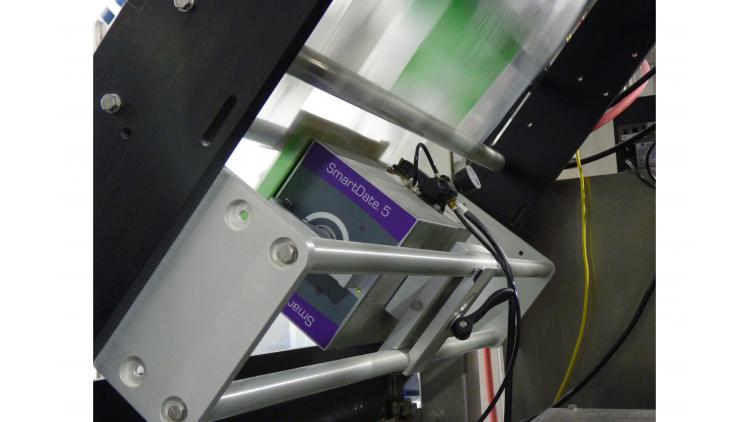 A nitrogen flush on the machines provides products with a 90-day coded “use by” date, printed by a Markem-Imaje SmartDate coder mounted on the backside film unwind section of the machine.

Some products also receive a label, which are printed and applied by Flex-Pac model units from EPI Labelers  mounted on the side of the machine that are optimized for flexible packaging and use direct-drive technology.

“These are both great units,” offers DelleGrazie.

Changeovers done a few times daily generally mean going from a 5- to a 10-lb bag or the reverse.

While the time needed for machine bag-size changeovers remain the same as with the old units, what has improved dramatically is the changeover of film rolls. That’s because splicing film from one roll to the next is much easier. “That may have taken hours trying to line up the bags on the old machine, where on the Matrix units it is ‘plug and go’,” says DelleGrazie.

Downstream of the baggers and outside of the primary packaging area are three new Wexxar automatic case sealers, one per line. Another three were purchased and installed downstream of the three old baggers.

Downstream of the baggers and outside of the primary packaging area are three new automatic case sealers, one per line. Another three were purchased and installed downstream of the three old baggers.

Wexxar was selected not necessarily because it was another Pro Mach company. “We looked at many tapers and honestly felt that Wexxar built the best,” says DelleGrazie. “Not only were they the highest-quality taper available, but we are very happy with them. They’re heavy duty, they’re reliable and they’re very easy to maintain as well.”

He says they run them at about half speed. The box erector adjacent to the sealer is a semi-automatic unit, also from Wexxar.

Standard parts a major plus

“One of the biggest benefits with Matrix to a company like ours is the parts,” explains DelleGrazie. “There are no OEM parts, so I can order from Granger or McMaster to get any part for that machine. That’s one of the top reasons we went with these machines. Our other baggers didn’t offer that, and the annual maintenance was triple what it is now because of OEM parts.

“Matrix had great training and service techs that were very responsive. When we needed them, they were here,” says DelleGrazie. “Aside from making good machinery, Pro Mach as a whole is a wonderful company to work with.”

Cheese Merchants took a chance to go in a different direction by making a change from the baggers it had used for the past 14 years. “To be honest, we were hesitant at first,” DelleGrazie says. “But a year and a half later, we’re still very happy with them and the service, the parts and the baggers’ operation. Our bag sizes work well with the Matrix machines and the baggers have worked out perfectly for our operation. If we had to do this all over again, we’d stick with Matrix and with Wexxar.”