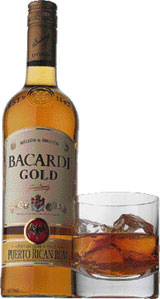 When rum was first produced by distilling sugar cane juice, it was a harsh, fiery drink that became the hallmark of sailors and pirates in Caribbean seaports. This began to change in 1862, when Don Facundo Bacardi founded his namesake company in Cuba, and began refining the formula and processing techniques. Probably even he didn't expect the success of his venture. Today, rum is drunk worldwide, and BACARDI's® flagship rum products have been the top-selling spirit brand in the world for the past 21 years.

Aiding this growth was the creation in Cuba at the end of the 19th century of what is now the world's leading mixed drink–the Cuba Libre (Coca-Cola and rum)–and the Daiquiri (rum, lemon juice, sugar and ice).

In 1999, the company completely redesigned its rum packaging to achieve a standout presence on the store shelf, while reflecting the quality and value of the world's leading brand of spirits. The redesign includes a new bottle and cap, but the key element is the body label. The company decided to emulate the high-tech imagery of the wine industry, with its alluring graphics and state-of-the-art label construction.

Inherent in this decision was a move to pressure-sensitive labels. "The double-foil pressure-sensitive label costs twice as much as the label on our previous package, but it's worth it to maintain our image," says Yousef Zaatar, BACARDI's coordinator of new product development and packaging. "As the leading company in the spirits industry, our introduction of this new package is going to change the industry." Other key BACARDI personnel involved with this project include Freddie Piedra, head of BACARDI Global Marketing, and Joaquin Bacardi, marketing project leader.

BACARDI produces approximately 20 million cases of rum annually in 11 bottling plants worldwide. This includes nine bottle sizes ranging from 50 mL to 3 L, although the 750-mL size is by far the largest seller. The package redesign applies to all nine sizes in all locations.

Project team designs labels
BACARDI set up a project with Avery Dennison and Fleming Packaging Corp. to address these requirements. After two years of design efforts, the team settled on a design incorporating two front body labels, one above the other, with the company's unique bat symbol bridging the gap between the two. The team first envisioned this as three separate labels, to be applied consecutively. However, it soon became evident that this could present alignment problems, so the team decided to include the bat logo at the bottom of the upper label. This label would be applied after the application of the lower label, and the bat would overlap the lower label.

Avery Dennison manufactures the Fasson brand of p-s label stock, and ships it to Fleming, which produces the finished labels. A challenge for Avery Dennison was that, because the rum is such an expensive product, BACARDI removes improperly applied labels from bottles of finished product, so they can be relabeled for shipment. Thus, while the labels must adhere sufficiently at application, they also have to be easily removed from the bottle for a short time after application, without any residue remaining on the bottle.

"We worked closely with Fleming and BACARDI on this project," says Avery beverage market manager Chris Weir. "We knew whose printing equipment they were using, and we recommended label stock that would run well on it. We looked at a variety of adhesives to achieve the label removal capability that BACARDI wanted. As the leading supplier of pressure-sensitive material to the wine and spirits industry, our experience was very helpful in providing labels that met BACARDI's graphic and operational requirements. The labels needed to be water-resistant, and be compatible with the specifications of the labelers and the operating environment at the bottling plant." The label ultimately developed by Avery Dennison is made from a paper facestock laminated to a polyester liner with an emulsion adhesive. Printing is done on the paper. "Avery Dennison would ship us samples of label material, and we would test it in our lab for scuff- and tear-resistance, durability, and other requirements. Then, we would run it on the press. When one looked good, we would review it with BACARDI. This was a complete team effort," says Fleming general manager Joe Tenhagen.

Fleming initially ran the new BACARDI label at its plant in Napa, CA, but recently began producing the new label for BACARDI GOLD® rum at its plant in Orlando, FL. The Orlando plant runs the new label, which includes six colors, dual foils, two varnishes, registered embossing, and in-line die-cutting in one pass on a Gallus press. The machine produces multiple rows of labels.

In addition to extremely tight registration requirements, the die-cutting is also particularly tricky because of the bat logo that extends beneath the bottom of the upper label. packaging digest visited the Fleming plant to see the production of the new label, and then traveled to the BACARDI plant in Jacksonville, FL, to observe the final acceptance run of the new label, which, as expected, went off without a hitch. This will be reported in our next issue.

To run the BACARDI GOLD label, the Gallus press has four rotary flexographic printing modules applying ink, two applying varnishes, two rotary hot-stamp stations applying foil and an embossing module. The press can also do rotary screen printing, but that is not required for the BACARDI labels. "The press is extremely versatile. We can change modules for different printing sequences within minutes and without tools," says plant manager Greg Harms. An interesting feature is that the control panel is mounted on a rail that runs the length of the press, and the operator can move it to any point on the line for easy access.

To start the printing operation, film is pulled from the roll, which is mounted on the end of the machine, through a vacuum-cleaning step that removes any dust or other contaminants. This infeed station also includes a film brake and a web guide, which consists of an eye that senses the edge of the web and adjusts rollers to keep the web on track.

The web then goes through the infeed nip, which pulls the film and controls tension. The web is also pulled by the rewind roll at the exit end of the machine. The web then enters the first printing station, which lays down the cream-colored basecoat. Next it passes an ultraviolet lamp that dries the ink. This procedure of printing followed by UV drying is used at each printing module.

The foil, which is supplied by API Foils, is a 50-ga material in which satin aluminum foil is carried on polyester film, with a wax release coat and gold lacquer for color.

The fourth station applies red ink for the round background of the BACARDI bat logo, the crest and the red lettering. Next, a light coating of black ink is applied on parts of the bat on the logo and on the metallic medals.

Station six applies heavy black ink on the bat and the "BACARDI GOLD" product name. This is followed by another hot-stamp unit that applies shiny gold foil around the product name and on the crest. Station eight is a printing module that applies shiny varnish over the bat, the product name and the crest. Station nine applies matte varnish over the entire label, except where the shiny varnish was applied. The web then passes a video inspection system from CC1, Inc. that sends images of the labels to a video monitor, where a worker can inspect each individual label for faults.

Station 10 is an embossing module that creates the raised sections on the label. This is followed by a die-cutting station, where the strips of label matrix are removed without cutting into the liner. Scrap is wound on an overhead roll. The final station on the machine trims off the outer edge of the web, leaving multiple rows of labels that are wound on a core.

The roll of finished labels containing the multiple rows is cut into individual rolls on a Tracker Premier slitter supplied by Arpeco Engineering. The roll is mounted underneath the front end of the machine and is pulled up over a flat table. A strobe light shining down on the web creates a stable image on a view screen, where a worker views every label for printing faults. The web goes down over a roller, then back up past an edge guide and a counter that counts the number of labels on the roll. The web then goes through a nip roller followed by slitting knives that cut the web into separate rows that are wound on paperboard cores.

Says Orlando plant manager Greg Harms, "We use Avery Dennison for a majority of our label stock, and they have been a great company to work with because of their knowledge and resources. And, they're always available to help us out when we need them. In fact, two people from Avery came down here when we conducted the final acceptance test at BACARDI."