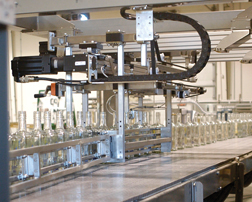 The laner straddles an existing conveyor along a packaging line and takes single-file rows of bottled products, like milk jugs, and diverts them to downstream areas for additional processes such as case packing.

When turnpike traffic is funneled left and right into the toll booths, each driver must be prepared to pay the toll in order to continue traveling. This same scenario also plays out in the packaging world. Upstream processes, like container blow molding or bottle filling, lead to downstream processes such as sealing or packaging. Laning machines are used to organize products for the next operation by rapidly dividing the line and diverting containers left and right as needed, creating multiple lanes for case packing, shrink wrapping or further processing. Moving containers into multiple lanes adds speed and relieves congestion, and just like drivers at the toll booth, products travel to their final destinations.

Hartness Int., Inc. (www.hartness.com), Greenville, SC, is one company that intimately understands the critical nature of packaged-goods traffic patterns. Hartness recently introduced a laner to the packaging and bottling industries that pushes the limits of line speed, while also protecting product packaging along the line. Called the GlobalLaner 2260, this laner's ambitious design called for a linear belt-drive module with an acceleration rate of 1 m/sec2 to keep pace with the line speed of 200 ft/min. 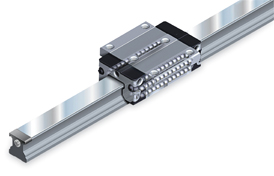 To give the laner the ability to relocate a section of bottles to any point in the grid, Hartness incorporates three linear modules on each GlobalLaner. Two X-axis linear modules are connected to a common shaft and driven by one servo motor. The third linear module is also servo-driven and acts as the Y axis.

Rexroth has developed a method called "LOSTPED" that can help with sizing and selecting linear motion systems. To learn more about this, go to www.packagingdigest.com/ info/374

The performance requirements for the GlobalLaner are ambitious. For example, it can handle 550 bottles of 1.75-L orange juice/min. Typical laners can only achieve accelerations of half that rate. The GlobalLaner is twice as fast as any other competing laner. Knowing this, it is not surprising that several linear modules failed the tests in the prototype stage of the design, as they repeatedly broke down under the stress of the side load, created because of product shifting and the demanding acceleration requirements. After several rounds of testing modules from various suppliers, Hartness called upon automation-solution provider Livingston & Haven (www.lhtech.com), which has a facility in Greenville, to provide linear modules that could not only accommodate the demanding acceleration rates of the GlobalLaner, but could also manage the intense load demands from 45-lb product without a breakdown.

After reviewing the specifications for the GlobalLaner, Livingston & Haven selected MKR 20-80 Belt Drive Linear Modules from Bosch Rexroth Corp. (www.boschrexroth-us.com) to do the job. "We evaluated the linear modules that Hartness had already tried and were acutely aware that they needed a more robust design," says David Long, Livingston & Haven automation specialist. "Our experience with the Rexroth linear modules and their performance, plus the full support of the Rexroth team in Charlotte, made us comfortable recommending them to Hartness for the GlobalLaner." According to Long, Livingston & Haven teamed up with Rexroth to test the modules, and together they confirmed that, with two modules on the X-axis (one driven and one idler) and one module on the Y-axis, the MKR Linear Modules could meet the acceleration and load demands Hartness wanted. Rexroth also took the project one step further by providing a confidence-boosting two-year warranty on the modules—twice the length of a traditional warranty. 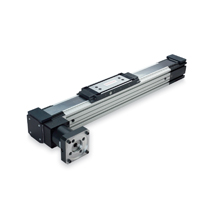 The linear modules withstand the stress of the side load created from product shifting and high acceleration requirements.

The Hartness GlobalLaner 2260 straddles an existing conveyor along a packaging line and takes single-file rows of bottled products, like milk jugs, and diverts them to downstream areas for additional processes such as case packing. For high-speed applications, the GlobalLaner can achieve speeds up to 200 ft/min, while gently handling the laning of the containers by not stopping or gripping them. The laner can run multiple shapes and sizes of containers, such as empty polyethylene terephthalate bottles for dish detergent, liquor, cooking oil and beer. It can modulate its speed according to the infeed and outfeed conditions, because of the tight coupling between the servo motor and input shaft of the gear reducer and the output shaft and drive pulley.

Due to the smooth acceleration and deceleration of the linear modules and the subsequent absence of container contact, the GlobalLaner produces little noise and no label damage. The continuous motion of the GlobalLaner does not disrupt the flow of products, whereas a standard laner will typically stop container flow during a jam, which can cause breakage when bottles collide. In addition, product and line-configuration changeovers can be performed in less than two minutes by handwheel guiderail adjustment, while the motion controller manages the number of lanes and the line speed.

Using the GlobalLaner, the system for the affore-mentioned 1.75-L jugs of orange juice requires splitting one line into six lines for packaging. This application was one of the bigger challenges for Livingston & Haven when selecting the linear modules. "These jugs were some of the toughest to accommodate on the line, because they presented the greatest moment loads that the laner and linear modules were required to handle," says Long. The moment load describes the load placed on the linear modules when dividing product flow into multiple lanes. "The laner shifts the products at this point in the process, which creates a side load on the linear module. We had to pay special attention to the inside track of the linear module that controls the load and product shift to ensure the module could handle the load without a breakdown," says Long.

The Rexroth MKR 20-80 Linear Module selected for the GlobalLaner features an AC servo motor and a pretensioned, toothed- belt drive for these demanding speed and load requirements. The modules are designed with anodized aluminum frames and carriages with low-maintenance, one-point lubrication. "Previously the GlobalLaner 2260 prototype was outfitted with some nonRexroth linear modules, but they couldn't handle the speed," says Mathias Coulomb, Hartness controls manager. "With the high acceleration and deceleration rates of 1 m/sec2, previous modules began losing position. We then switched to the Rexroth modules based on the recommendations of Livingston & Haven. The quick and easy access to parts, combined with the service and support from Livingston & Haven and the Rexroth group in Charlotte, have been incredibly beneficial. If we have issues, they are very helpful." 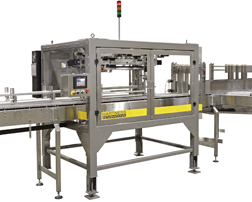 The laner employs a linear belt-drive module, above, with an acceleration rate of 1 m/s2 to keep pace with its line speed of 200 ft/min.

The linear modules have allowed us to achieve unprecedented line speeds with their exceptional drive-acceleration rates," summarizes Coulomb. "Rexroth's willingness to provide a two-year warranty on its linear modules and Ball Rails also demonstrated to us their confidence in their product's performance and in the GlobalLaner application. Their commitment, which is complemented by the service and support of both Rexroth and Livingston & Haven, definitely boosts the benefits we offer, when selling to our customers. It gives us an even greater degree of confidence in the product we're selling, and it gives our customers confidence in their purchase of the Hartness GlobalLaner."