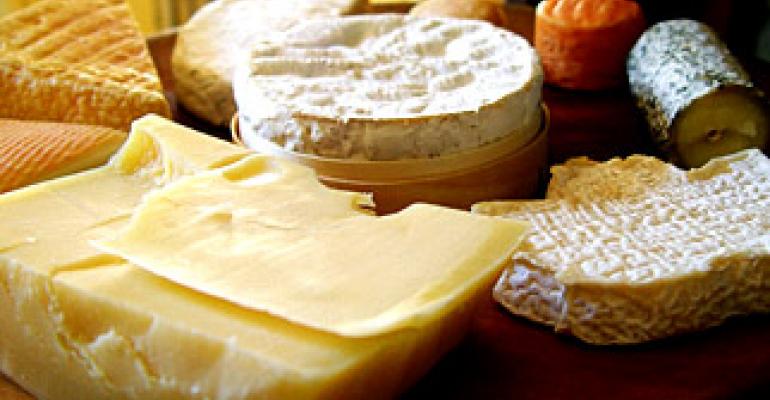 For the past two decades, Wisconsin Cheese Group (WCG), Monroe, WI, in the heart of the Dairy State, has built its business by providing premium-quality specialty cheeses to wholesale, retail, and foodservice customers. Producing varieties of cheeses from Ackawi to Queso Quesadilla and everything in between, the company serves local, regional, state and national markets. WCG makes a bounty of private-label cheeses for some of the nation's top retailers.


The group is also a big producer of farmer's cheese, and began making Hispanic cheeses about 11 years ago, naming its line El Viajero, after a 108-year-old Travelers brand of cheese; viajero means “traveler” in Spanish. Its specialty Hispanic cheeses include cotija, para freir, quesadilla, and blanco.

The company combines 100-percent Wisconsin milk and proprietary cheesemaking processes to result in a “taste of tradition” for its customers. Vacuum-packed in clear and opaque white flexible film rollstocks, the cut pieces of cheeses include some 15 different package configurations that vary in size from 5 to 24 oz, and 2-lb cheese twin-packs.


The cheeses aren't spicy but are quite mild in flavor, though some have a stronger flavor. Queso Fresco (translates from Spanish to fresh crumbling cheese), for example, has a mild, slightly salty taste with a white appearance and soft, moist crumbly texture. Queso Quesadilla is a semi-soft melting cheese, Queso Para Freier (fresh frying cheese) is white and mild with a firm texture. Queso Cotija (fresh grated cheese), is white and semi-firm with a salty, pungent taste. But other cheese varieties are drier and firmer.

WCG believes its future is in the Hispanic market. In recent years, sales of its El Viajero cheese brand have consistently outpaced its other cheeses by about 15 to 20 percent a year while the Wisconsin Farms line has been relatively flat. El Viajero now accounts for about half of WSG's revenue, compared to 30 percent two years ago.

Considering the booming demand, WSG needed to automate further with the help of the camera-based M430iA/2F robotic system from Fanuc Robotics (www.fanucrobotics.com), integrated with existing packaging and conveying equipment by local Fanuc system integrator Faith Eng. (www.faithengineeringinc.com). Faith Eng., in turn, added product-handling components, conveyors and engineered the system's camera-based vision unit to ensure that the cheese packs are present and entering the system as required.

Faith Eng. also engaged Rockwell Automation (www.rockwellautomation.com) to provide operator controls and a menu-driven Allen-Bradley Compact Logix,600 PLC with touchscreen that gives the robot the specific parameters for each product and simplifies operation with quick changeovers from one product to the next.


At one time, the cheese packs were picked and placed by hand on the existing cheese packaging line for labeling. Not any more. The robot picks and places the primary vacuum-packed cheeses in groups of three rows across from one line to a single-file conveyor. It also re-orients them so that they are aligned on a second conveyor for labeling at a rate up to 81/min. The system is capable of picking packaged products at cycle speeds up to 120 cycles/min using the visual line tracking. Considered the only robot to meet hygiene requirements for meat and poultry plants, the system has received acceptance from the U.S. Department of Agriculture. “It's definitely an efficiency upgrade for us,” says Dale Losenegger, WCG plant manager. “The robotic system performs so many of our previously manual tasks automatically.”

Featuring a vacuum-picking method, the new system includes protective Plexiglas guarding provided by Faith Eng., which assisted in the system's installation in mid-2008.

Designed to provide smooth, speedy operation of primary and secondary food packages, the M430iA/2F is a five-axis, articulated, robot with an electric servo drive. Its end-of-arm tooling has a vaccum-cup gripping and release device that can be interchanged for single- and twin-packs. Supported by its intelligent controls that visually track the cheese packs, the compact unit has a washdown-duty construction that is relatively new to the cheese industry, WCG's Losenegger indicates.

While adoption of robotic technology has become routine in many other sectors, robotics in industries such as in the food market, is still pretty low—especially in dairies, admits Losenegger. But its potential could be endless, especially for previously manual jobs like picking and placing, he says.


“We think it's new to the dairy industry,” he says. “As the technology becomes more refined [for this industry], I think it will have many more applications.”

Running eight to nine hours a day, five days a week, the single-arm robot can be integrated with most form/fill/seal machines running rollstock or rigid packaging, says Faith Eng.'s president Jim Faith. “The orientation and grouping of the packages doesn't matter to the robot,” he notes. “It picks and places each package individually.”

In operation, after the pieces of cut cheese are vacuum-packed and sealed in film from Cryovac (www.cryovac.com) by a Tiromat (now CFS North America [www.cfs.com]) Model VA430 form/fill/seal system, they discharge in counts of nine in 3x3 rows and travel on a variable-speed conveyor belt parallel with the infeed to the robotic pick-and-place system (Dorner [www.dornerconveyors.com]) provided both infeed and outfeed conveyors for the robot system). Because the cheese packs discharge randomly onto the moving belt conveyor every 11 sec, as they enter the robot station, the Fanuc camera and encoder-based vision system identifies each package, either in white or clear film, and tracks it as it proceeds down the conveyor. The camera takes a “picture” of each package and sends the “placement” image to the robot's PLC, giving the encoder the package's linear position.

Mounted over the robot's conveyor belt, the ready-to-use iRVision system's camera has a two-dimensional guidance tool that locates products as well as error-proofing features. Sensors feed information to a camera lens mounted directly over the robot's infeed conveyor to gauge speed and the position of the individually packed pieces of cheese or twin-packs, depending on what the line is running so that the robot arm is directed to the proper picking position. If more than one type of product needs to travel on the conveyor, an operator/programmer can assign a percentage value and a part ID to distribute the robot's picking assignment. Faith Eng. developed special lighting and a camera lens filter.

Once the products are within reach, the robot uses a vacuum-gripping device to properly pick and align the cheese package on the infeed of a Koch (www.kochquipment.com) top-and-bottom labeler downstream. A container at the end of the infeed conveyor catches any “no-pack/no pick” packages and a crossbeam photoeye added to the discharge conveyor affords another checkpoint. The packages are then labeled on the recently purchased Koch machine, code-dated on a Videojet (www.videojet.com) ink-jet system and then pass a Fortress Technologies (www.fortresstech.com) metal detector that checks for minute metal contaminants and fragments. The labeled, coded, inspected packs are then is price-coded on a Bizerba (www.bizerbausa.com) weigh/price scale. Next, the cases are packed and each case is pushed into an E-Z Tape top-and-bottom case taper from E-Z Tech Industries (www.eztek.com) before a case label is printed with tracking data and case weight on a DataMax (www.datamaxcorp.com) printer is hand-applied to each shipping case. The cases are then manually palletized and the loads are put into cold storage until they're ready to be distributed.


Set up as an independent workcell that can be adapated to any of the packaging lines, with minor changes, the robot system only occupies about 6x6 ft of space, which was lucky for WCG. “There are a lot of things going on in this 50 to 60 feet of space,” adds Losenegger. “We only had so much space to work with. We have limited space available for the entire line configuration.”

And while the WCG staff had no previous experience with robotic equipment, it found the robotic system easy to learn to operate, thanks to training by Faith Eng.

Built for rugged environments, the modular M-430iA/2F handles payloads of 1 kg at 120 cycles/min and 2kg at 100 cycles/min. “It only took one week to learn to operate,” Losenegger says. “It's basically learning about the functions and the operation sequences.”

Part of the reason for the quick learning curve is because of the system's PLC programming controls that facilitate product size changeovers. The robot is also outfitted with Fanuc's iPendant™ color, Internet-ready teach pendant training tool, which WCG operators use to generate new programs, troubleshoot and make operating adjustments. The Windows®-based teach pendant comes with Fanuc's Pick Tool Software that simplifies setup of multiple picking systems and works with more than one type of product on the conveyor. The programmer can assign a percentage value and a part identification to distribute the robot's picking assignments. The tool can also allow the robot to pick and/or skip any number of selected products, fill cases, should WCG desire. Should WCG add a robot, the tool has a single point for setup of a multi-robot system and can automatically redistribute product to another robot if the assigned unit stops. For now, operators may easily program the robot and customize its uses. An operator can select a program in seconds, explains Losenegger. “Each pick program is stored in memory so it can be found easily.”

According to Losenegger, Faith Eng. introduced the robotic technology to the project, providng all of the robotic system components and integrating them on its own production floor for testing before installing and engineering the system in WCG's facility. “We have been developing automation within our packaging lines with Faith for six years,” says Losenegger.

“This was our first robotic project that works in conjunction with rollstock packaging equipment,” points out Jim Faith. “It's a standalone unit that doesn't have to be tied to anything else, even though it can be.”

Losenegger says that per shift, the system is replacing one operator who has been redirected to other functions within the facility. “We decided to automate this part of our packaging operation to save on labor and gain better label-placement accuracy,” Losenegger sums up. “The greatest benefit has been the improved label-placement accuracy, at a cost savings of 10 percent in fewer package rejects. This gives us the greatest degree of flexibility and increased productivity. The payback will be a year on labor, packaging throughput and efficiency. We hope to continue to move into robotics. Eventually, we'd like to format the pick-and-place robot to perform other feeding jobs, if that's possible.”