Committed to providing customers with a superior product and service, Holiday Ice, Syracuse, NY, a well-known upstate New York supplier of packaged ice, found its palletizing operation on a bit of thin ice recently. The manual palletizing process for its bags of ice was difficult and limited its processing capacity, particularly during peak season, which runs from Memorial Day to Labor Day, when additional personnel are needed. Providing localized ice service through a network of distributors and associates, the family-owned and operated business has a recently renovated a production facility that's capable of generating up to 200 tons of the frozen product a day, including ice cubes, ice tubes, party ice and even custom ice carvings, using what it describes as the most modern icemaking and packaging equipment. To ensure that its customers receive the best packaged ice possible, Holiday decided to freeze its former bagged-ice palletizing process and install a newly commercialized packaged-ice palletizer from Robotics and Automated Equipment Services Co., Inc. (RAESCO www.raesco.com]).

Holiday typically runs up to 300 bags/load, while operating one 8- to 10-hr shift a day, with the possibility of a second shift up to 6 hr, seven days a week. Stacking the frozen bags on pallets for shipment had been a challenging, physically demanding task that quickly encouraged Holiday to seek other alternatives. For several months, the company tested RAESCO's newly developed Series 278 double-pallet loading system before the machine was unveiled at an ice-packing convention in November of 2005. In January 2006, Holiday began installing the 278, which loads polyetheylene film bags provided through current RAESCO equipment representative Ice Systems & Supplies, Inc. (www.issionline.com) that are then filled and heat-sealed on Hamer, LLC (www.hamerinc.com) equipment. The installation was completed in February.

Designed to accept loose or baled bags weighing 7 to 42 lb, the dual-loading (a single-pallet-loading version is also available), patent-applied-for system is constructed of stainless steel and painted carbon steel. Although not technically classified as a robot, the system uses a servo for placement speed and accuracy and comes equipped with a control cabinet, user-friendly, operator touchscreen PLC controls, two axes of motion (Y and Z), a regenerative blower for a set of rotation cups and gantry vacuum cups, a gantry, gantry vacuum cups and operator access for pallet loading and unloading. Able to reach speeds up to 40 bags/min, the compact system works with 40348-in. pallets in about 72 sq ft of space. While especially designed for ice, the machine can handle assorted fragile, loosely packed products such as pharmaceuticals, bird seed, frozen vegetables and difficult-to-handle products as well as products in flexible packages of various types—which is why it appealed to the ice supplier. 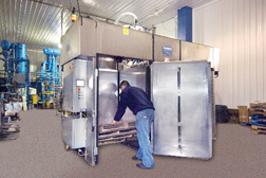 An operator places a pallet into position in the ice-bag palletizer’s loading chamber, which is equipped with a motorized pallet lift. Meanwhile, row formation of the bags of ice progresses in the collator. Holiday Ice now packs about 40 to 50 tons of ice a day.

Ice isn't the easiest product to unitize, since it's vulnerable to melting, says Sal Barraco, owner of Holiday Ice. Stacking bags of it by hand on pallets in a cold environment is difficult, to say the least. But many palletizing systems can be elaborate space-consuming and can cost much more than Holiday's budget could permit. “We had always considered an automatic palletizer, but we couldn't find one that could stack individual bags,” notes Barraco. “I don't know of any other palletizer like this one, much less any others that could work in the space we have. We found nothing else that could work with this bag size. All of the other palletizers were too large and more expensive and would have required us to bale our product. That wasn't an option. RAESCO approached us and said it could fulfill our automation requirements, and the rest is history.”

Space constraints were also an issue at the Syracuse plant. “Floor space was a definite concern,” Barraco continues. “We couldn't afford to use much more space than we already did. Other palletizers that apply to our industry were too large to fit into our facility. Any new equipment had to fit within a tight space, but the size of the palletizing unit is less than 100 square feet, so it fits into the packoff area. We also like the fact that we can run hands-free, which allows us to perform other tasks. And I'd estimate that the system has reduced downtime by about twenty percent.”

Changeovers on the machine take less than 10 min. Holiday currently uses the system for 7-lb bags of ice cubes only. Soon, it will be used with a 20-lb size. With a few adjustments of a gantry head with quick couplings and input of a product selection on the touchscreen panel, which displays pallet status and speeds, provides diagnostics and operator control, changes from one package configuration to another can be completed. “We've been told it can be done in very little time, but we have not needed this option,” Barraco points out.

After Holiday expressed its needs to the machinery manufacturer, it finalized on the dual-loading Model 278 palletizer versus the single-loading model, the former able to load two pallets one after the other, for continuous run time, so that one pallet load is completed on one side at a time. 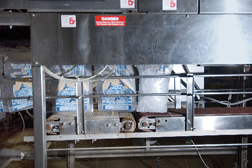 Polyethylene film bags are formed and filled with 7 lb of ice cubes and are sealed at 37 bpm before the bags are conveyed on a low-profile belt to the palletizer, on which they are oriented based on a preset pallet packing pattern.

Today, the company packs an average of 40 to 50 tons a day with the new palletizer. “The dual-loading option allows us to run the bag machine continuously and reduces downtime dramatically,” Barraco says.

“We have been in touch with Holiday Ice for the last five years, researching their need for an automated system,” explains RAESCO president Rich Hulchanski. “They were the system's first user.”

Holiday's ice-packing facility in Syracuse is IPIA (International Packaged Ice Association)-certified and inspected to ensure that the ice is the best it can be. The cubes of ice are transported to the bagging area from the icemaking machine by screw conveyors from a Keith Mfg. (www.keithwalkingfloor.com) Walking Floor bin conveyor where they move to the Hamer Model 53 form/fill/seal bagger. Once in production, the cubes of ice are deposited into loose, clear-film bags that are produced and heat-sealed at a rate of 37 bags per/min. Next, the filled bags travel on a low-profile belt conveyor that inclines to the infeed of the palletizer. The bags are sensed by a presence-sensor lever arm, with input that links to a programmable logic controller that regulates machine functions. The bags can be oriented, based on a preset pallet pattern, or can travel straight through to a picking chamber, while a regenerative blower that provides vacuum to a set of gripper cups is activated. The bags are then collated in groups of six to form a row as sensors determine when the row is completed. The collation conveyor indexes a width of the bag until a row of bags has been collated. Then, the series of vacuum cups descends via air cylinders to the bags, grasping them as the row transfer begins. A separate regenerative blower provides vacuum as the row is picked by a gantry unit and is transferred to the waiting pallet and placed in a designated location. Mounted on brackets connected to the gantry, the number of cups contacting the bags depends on the pack pattern being formed. 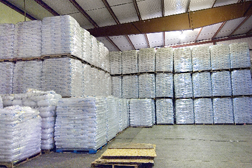 The tightly wrapped loads of ice bags are palletized 15 bags per layer, 20 layers high or 300 bags per load. Each load weighs 2,100 lb and can be stacked three loads high.

The gantry has a vacuum sensor that sends a signal to the PLC to let it know that sufficient vacuum has been achieved to pick the bags and transfer them to the pallet. If this does not occur, the system will reject the row of bags it's grouping without operator intervention and will begin collating a fresh row of bags.

An operator has meanwhile moved a pallet into loading position in a motorized pallet-lift system powered by a 1-hp motor and drive chains. Row formation continues.

During the bag-stacking process, the pallet rises to the height of the collation conveyor, and the bags are downstacked, or tiered down, to eliminate extraneous motion and time. Counter weights stabilize the pallet as the layers of bags accumulate. In Holiday's case, each pallet receives 15 bags per layer, 20 layers high, with an alternating pattern, or 300 bags per load. The loads each weigh 2,100 lb.

Doors on the front of the system provide ample operator access and have a locking safety switch. Safety cylinders are deployed to prevent the gantry from traveling over to the finished chamber while the pallet is being removed. When the load is ready, an amber beacon light flashes, alerting operators that the load of ice can be removed from the loading cell and a fresh pallet can be put into place. The gantry immediately starts loading the chamber so that production doesn't stop. The operator opens the chamber door and can then forklift the load to an ITW Mima (www.mimaitw.com) Cobra 32 stretch wrapper to receive a snug film wrap.

Finally, the loads move to a freezer warehouse where they're stacked up to three loads high until needed. “The best feature of the 278 is the consistent shape and size of the finished pallet,” Barraco observes. “It makes stocking the freezer and loading trucks much easier.”

Barraco believes the company has already seen a return on its investment. “It has really improved our overall packaging process and eliminates a lot of additional labor and retraining,” he says. He's so pleased, that he would like to get a second machine. “Production demands are more manageable. We can run production as-needed,” he sums up. The finished product is also very nice looking. I'd like to buy this system for a line that handles bale bags.”