Will You Soon Download Packaging Machine Controls from the Internet? 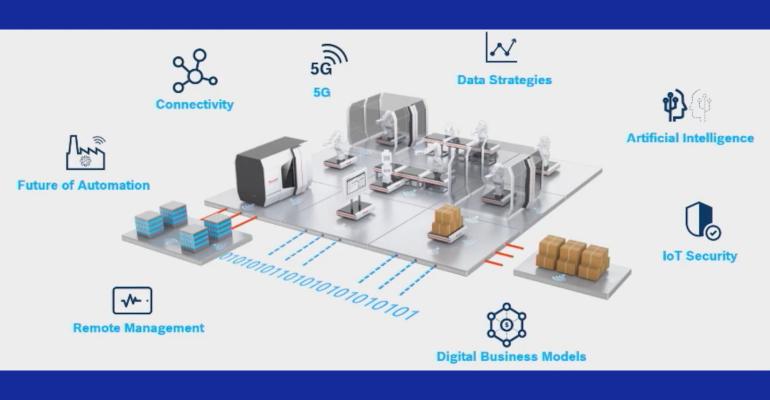 Led by the mantra that “mechanical engineering is based on software development,” Rexroth, a Bosch Co., has brought a new generation of automation software to market. The new system, ctrlX Automation, extends beyond the company’s hardware heritage in areas of hydraulic, electric, pneumatic, and mechanical drive and control technologies to offer a platform for complete automation solutions.

The new software-focused system brings traditional tools together with IT standards to bring control engineering into the age of smart manufacturing the Internet of Things (IoT), in keeping with a new corporate strategy we reported on last year. This relates to our May story, “3 Packaging Lines Improved by IoT Data,” but the company wanted to wait to disclose details pending its US market release…which is now official.

Designed for machine builders, systems integrators, and end users with the resources to do their own control engineering, the system is initially targeted for “specific, focused applications,” namely robotics, material handling, and drives. In packaging, this makes it applicable for secondary and end-of-line realms. According to Dave Cameron, director of sales, future apps are in the works for additional packaging, assembly, printing, additive manufacturing, and machine tool apps.

Abbreviating applications to “apps,” incidentally, is one cue that the system is positioned for this era of IoT- and mobile-friendly deployments, as evident in the internet standards that largely define the system.

The software includes preconfigured apps that can be further customized. These include a PLC, motion controller, drive, human-machine interface (which can be web-based), monitoring dashboard, IoT gateway, and more. Apps in development include artificial intelligence (AI) and machine learning routines to monitor and detect variations in machines or processes. (See more apps here.)

Rexroth says the system has “eradicated the traditional boundaries between machine control systems, IT, and the Internet of Things.”

Let’s start with a new generation of hardware control modules called ctrlX Core. Based on 64-bit multicore CPUs. The control modules are offered in three forms: a standalone ctrlX controller, on a control module integrated into a servo drive, or an industrial PC. These run Linux, with the IPC running Windows and also getting a Linux release. This offers scalability depending on the function, from real-time control to the greater overhead of workstation-level applications, as needs require. These support fieldbus options such as EtherCAT, Sercos, Ethernet IP, and Profinet. Support, in fact, spans common device protocols, interfaces, and communication standards, including support for more than 30 IT and IoT standards OPC UA (server and client) and MQTT, the leading machine-to-machine connectivity protocol well known for driving closer interfacing between operational and IT systems.

Software designed for IT inroads.

Cameron called the software “the heart” of the new platform. That being the case, the system’s crown jewel software, ctrlX Works, is its digital heart of hearts. Claims that it reduces engineering time by 30% of 50% owes to the software’s large portfolio of preconfigured apps for common factory automation tasks. Users can customize them, develop their own (in seemingly any programming language), and more integrate third-party apps with relative standards-compliant ease.

Starting with programming, users can choose between their familiar, traditional tools as well as new methods. These include IEC 61131, PLCopen, or G-Code, or other conventional high-level or internet languages, which Rexroth says “liberate” teams from depending only on hard-to-find PLC specialists.

Software functions can be based on preconfigured or customized apps, combining traditional and newer languages: C++, Python scripting, or graphical languages, such as Blockly or Node Red, a low-code Javascript graphical environment. This variety helps users expand their skills (and recruiting) base and opens new possibilities for app development through GitHub, the leading open-source community for code-sharing.

The software for system design, maintenance and engineering can be accessed directly on the ctrlX CORE controller, by using any device with a simple web-browser.  This eliminates the need for separate engineering software on a different PC.

To show how web-based engineering works, Rexroth’s Brian Schmidt, application engineering supervisor, demonstrated the creation a 3-axis motion control app using IoT-friendly Node Red, which he also uses to build a web-based human-machine interface. “Most of the program flow is created graphically, but you can also write snippets of code,” he says, as he creates the program, jogging axes and the robot. He then tests the system using a 3D visualization app for feedback. Users can simulate their project before they download their actual automation programs to real-world hardware. He also created a pick-and-place application using different programming options. (See video below.)

Rexroth’s Brian Schmidt demonstrates web-based engineering by building a 3-axis motion control app (at the 5-minute mark), and shows its operation using a 3D visualization app. At the 10-minute mark, he shows another way to program a pick-and-place application, then gives a closer look at the control hardware running the demo.

The apps are modular, and priced individually. “You just buy the software according to what you need for your application,” says Allen Tubbs, product manager Rexroth controls. Also in the works: a device portal for at-machine upgrades and an online app store. According to Tubbs, the system is designed to be “as open as possible. That means inviting customers and even other providers to develop solutions around our architecture.” He says the company currently has a developer portal, and plans to encourage GitHub participation, as well.

Assurances of future-proofing include extensive compliance with standards for data communications and legacy software migration/interfacing; secure encrypted communications based on IEC standards that will continue to evolve; and provisions for 5G and time-sensitive networking.

As end users gain experience with IoT data visibility, this type of system is poised to help companies extend their IoT implementations for greater machine, line, and plant performance. The data connectivity and visibility gained, Rexroth points out, will lead to more effective forays in machine learning and AI, up to and including lights-out manufacturing.