Inspection comes to a foamy head at Vienna 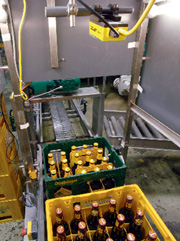 Package inspection has also been automated at Ottakringer Brauerei AG, located in Vienna, courtesy of the effectiveness of Cognex's Checker 101 vision sensor. Used to ensure that its beer crates and cases of canned beverages contain the correct amount of product, Ottakringer's economical new sensor was added to its secondary container-inspection stations.

Consumer satisfaction is a decisive factor in the face of tough competition in the brewery business, as Ottakringer Brewery knows. The main priority of the brewery's maintenance department is inspection of its beer crates of bottles and shippers of cans. So as an extra quality measure, Ottakringer wanted to guarantee that its tertiary packaging contains the full number of defect-free beverage products, in order to prevent customer complaints. The second-largest Austrian brewery says that it has been able to make significant production and quality improvements while reducing costs by using the intelligent Checker 101. Image-based sensors are increasingly taking over the tasks previously performed by standard sensor technology. In the Ottakringer brewery, intelligent sensor technology is benefiting bottling lines and sales and is proving to be an important factor in the company's competitive contract bottling operation. 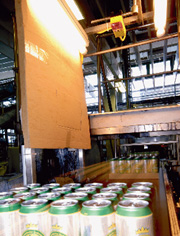 After Ottakringer contacted the image-processing department of Cognex partner Schmachtl GmbH (www.schmachtl.at), which honed in on the brewery's production automation needs and priorities, the brewery was able to develop an in-house sensing solution. Schmachtl provided a test unit and recommendations for Ottakringer's maintenance team on setting up the inspection station. The brewery reports that the sensor proved to be easy to install and operate as well as simple to program using a laptop computer. Onstream since January, the automatic inspection procedure involves transporting each case of 24 cans along a running conveyor belt equipped with the Checker 101 to determine if 24 cans have been correctly inserted before the case is shrink-wrapped and readied for distribution. The results of the check are transferred directly to a production-control system. Production flow is improved and batch production statistics are easily obtained, Ottakringer reports.

With fast and scalable results, the system was then ready for an additional application within the brewery. The next step for the maintenance department was to introduce a completeness check on beer-bottle crates. According to the maintenance team, the previous inspection method, which was a complicated system using many individual sensors, was a bit outdated and needed to be replaced with a more flexible, reliable technology. The department completed the additional crate-application project by March 2006. The simple, space-saving sensor design proved to be of a real benefit, as no fundamental changes to the conveyor line were required. Like the beer-can shippers, the crates of beer bottles travel on a running conveyor belt and are inspected by the Checker for the proper amount of bottles. The sensor can also distinguish whether the bottles have light or dark tops.

Compact and sturdy, with an integral LED illumination and lens, the intelligent sensor measures 53.23129.2345.9 mm and can analyze up to 500 images/sec. It features protection Class IP67 and automatically adjusts to the respective bottle, determining whether 18, 20 or 24 bottles are in each crate moving down the line. And the staff doesn't have to modify the inspection station when changing a package type. The station runs on a two- to three-shift basis and reliably inspects beer crates at a rate of about 1/sec. Integration of the Checker into the control technology of the production system was easy, the brewery notes, due to a standardized interface. If a fault is registered, the sensor causes the production belt to stop automatically. The operating staff can program new jobs quickly using a laptop. Shipment quality has improved, according to the brewery, and contributes to upgrading Ottakringer's image. Already, the brewery says it may use the Checker sensors for other parts of its operation.