Thirsty? If you want a cold one and need enough for a crowd, how about a keg of beer? For more than 175 years, D.G. Yuengling & Son, Inc. has produced a wide array of craft-brewed beers, in bottles and in kegs, and today operates two facilities in Pottsville, PA, and one in Tampa. Considered America's oldest brewery, Yuengling produces traditional and light lagers, premium and light beer, porter, ale and Black&Tan, a unique combination of beer and porter. Yuengling distributes its brews in 10 states and generates 1.6 million barrels of beer annually. Evaluating an expansion to distribute to two more states, the brewery experienced double-digit growth over the past five years. That growth has prompted Yuengling to find ways to improve productivity with respect to its keg operations, so it searched for container-weighing technology that could handle the heavyweight beer kegs at production-line speeds. 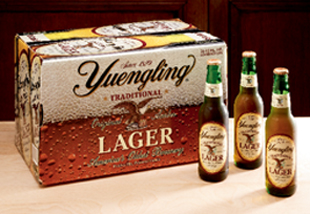 To ensure that customers get what they pay for, in February 2007, the brewer installed Mettler-Toledo Hi-Speed's (www.mt.com/hi-speed) CS3600 Caseweigher with XE control to weigh kegs coming off the filling lines at the brewery's Mill Creek facility in Pottsville.

“In the brewing industry, if your technology isn't continuously reliable, your competition will swallow you up,” explains Joe Frinzi, manager of quality and operations at Yuengling. “The Caseweigher is rugged enough to handle the heavy weight of our kegs, and the Hi-Speed engineers were willing to customize it to fit into a small space that was available on our line.”

Able to weigh containers in configurations up to 30 in. wide that weigh 44 to 250 lb, the system delivers accurate, repeatable weights within +/-0.35 to +/-1.5 oz, depending on the application. In the Mill Creek facility, the in-motion weigher sits on a filling line equipped with a KHS-Till (www.khs.co.th/khstill.htm) filler with five individual lanes that outputs 66 kegs/hr/lane, for a total of 330 kegs/hr. The line is built to handle two keg sizes—a quarter barrel and a half barrel—with only brief stoppages for changeovers.

As Frinzi emphasizes, however, the filled half-barrel keg is no lightweight, at 160 lb. “When you are transferring three-hundred-thirty of those an hour, the machines that handle them have to be robust,” he points out. “Our old checkweigher could accurately weigh the kegs, but it couldn't transfer them onto and off of the scale without stopping to weigh each keg. And it shook horribly. A roller conveyor [operating with it] occasionally would bend because it couldn't withstand the impact on the transfer. The wear and tear created a maintenance nightmare and the product waste began to hurt our bottom line.”

The new Caseweigher's continuous-motion scale immediately impressed Frinzi. “It was heavier than we expected, totally accurate and very stable. The keg transfer is so smooth that you hardly notice it. ”

But the system had to fit into a tight space only 2 ft long and 18 in. wide. So Mettler-Toledo Hi-Speed customized the CS3600 to fit. “Some potential vendors took one look at the space and our environment, and said either that they couldn't do it, or that they needed to build an entirely new machine, reinforced to handle all of the pounding,” says Frinzi. “But Mettler Toledo Hi-Speed had no trouble customizing their standard machine.” 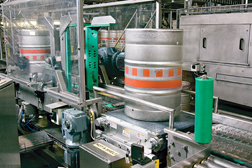 The in-motion checkweigher with control panel, above, weighs half-barrel kegs (160 lb) and can also be quickly changed over to run quarter barrels.

Designed to handle tough industrial environments like Yuengling's, the ruggedly built weigher has a stainless-steel frame, a heavy-duty rejector and an Intralox (www.intralox.com) 400-Series plastic belt conveyor that allows the weigher to easily withstand the constant impact of heavy cases, pails, totes, sacks, cartons, bags, boxes and other containers and move from scale to transfer belt without a hitch. Frinzi says the new belt moves at the same speed as the conveyors to ensure a smooth transfer.

He says the XE controller provides operator access to scale functions through an intuitive, multilingual, menu-driven touchscreen display. Training was minimal on the controls, he adds. The 100-product memory facilitates setup and changeovers with the help of a color touchscreen user interface. “We only have two line operators,” Frinzi says. “The line is entirely automated. The user interface allows the operators to see what the weigher is doing from almost anywhere on the floor. We can easily generate a report and identify and fix a filling problem quickly.”

There are many steps involved in the brewing process. Basically, the beer ingredients are milled, combined, cooked, softened and liquefied; then more processing steps take place as the liquid (wort) is separated from the grains and transferred to a kettle, to be boiled for sterilization before hops are added. Then, it's pumped into a tank to be cooled before it's transferred to a fermentation cellar.

Pure, cultured Yuengling yeast is added so that fermentation can take place. It is at this point that the yeast converts simple sugars into alcohol and carbon dioxide while imparting its own special flavors to the beer. Once the wort is fermented, it can be called “beer.” The yeast is reclaimed and used for the next generation of brews, the CO2 is reclaimed, purified and is later injected back into the beer. The resulting beer is then pumped through a centrifuge and is cooled to 32 deg F before being transferred to an aging cellar and allowed to age for 14 days to increase its clarity and allow its flavor to mature. The mature beer is then cooled again and filtered for sparkling clarity, and the CO2 is adjusted to ensure superior flavor and foaming qualities before the beer is moved to finishing tanks. Throughout this process, the beer is carefully monitored. The beer is then pumped to the keg or bottling line for filling and weighing. 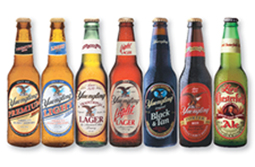 After filling, the kegs are uprighted by a keg turner from KHS Till and conveyed to the CS3600 Caseweigher for weighing, If they pass muster, the Intralox belt transfers the kegs to a discharge conveyor. Next, the weighed kegs receive a dustcover cap placed on their dispensing valves by a KHS Till capper before they're coded with brand information, a production date and the time of production by a Videojet (www.videojet.com) coder. From there, they're robotically picked up and palletized on systems from Kuka (www.kukarobotics.com) for shipment or conveyed to a cooler.

“Changeovers take about ten seconds, although the entire line takes between fifteen and twenty minutes,” says Frinzi. “Everything is preprogrammed so that the line operator selects a specific product to run from the control panel. We change keg sizes on the average about twice a week.”

Yuengling is foaming with enthusiasm about the keg-weighing station. “Operators call it the Rolls Royce of checkweighers,” Frinzi notes, adding that he thinks the weigher system will pay for itself in about a year. “Downtime is expensive,” he tells PD. “That's why we like the quality and reliability of this unit. We don't have to worry about it. It works perfectly.”