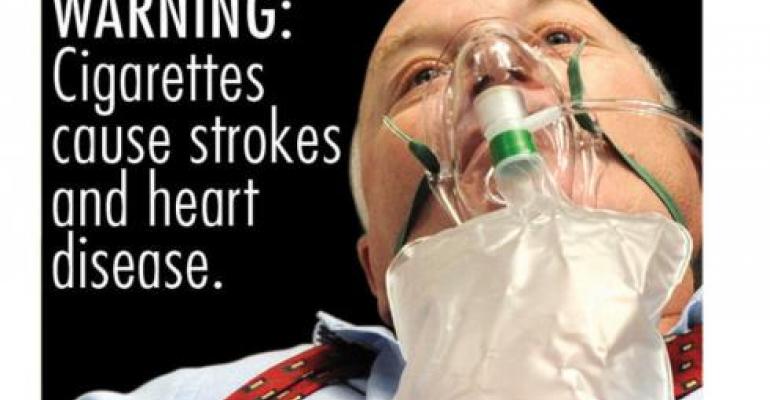 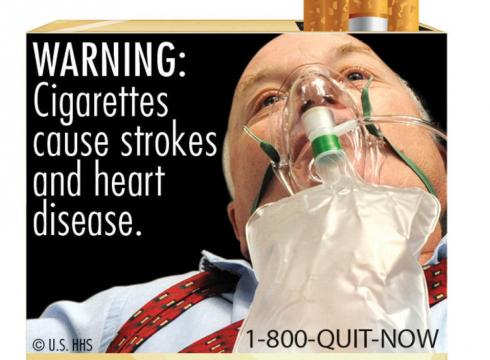 In a 2-1 decision, the U.S. Court of Appeals in Washington affirmed a lower-court ruling that the requirement ran afoul of the First Amendment's free speech protections. The appeals court tossed out the requirement and told the Food and Drug Administration to go back to the drawing board. The decision is considered a blow to one of the Obama administration's major public health initiatives, raises the prospect of another U.S. Supreme Court tobacco battle and opens the door to further challenges of FDA's regulatory scheme.

Some of the nation's largest tobacco companies, including R.J. Reynolds Tobacco Co., sued to block the mandate to include warnings to show the dangers of smoking and encouraging smokers to quit lighting up. They argued that the proposed warnings went beyond factual information into anti-smoking advocacy. The government argued the photos of dead and diseased smokers are factual in conveying the dangers of tobacco, which is responsible for about 443,000 deaths in the U.S. a year.

"We are pleased that the Court of Appeals agreed with Reynolds that consumers can and should be fully informed about the risks of tobacco use in a manner consistent with the U.S. Constitution," says Martin L. Holton III, executive vice president and general counsel for R.J. Reynolds. "Reynolds is committed to providing tobacco consumers with accurate information about the various health risks associated with smoking."'

The Court of Appeals noted that the Government can require companies to make "purely factual and uncontroversial" disclosures about the risks of their products in order to prevent consumer deception, but stated that the graphic warnings crossed into unconstitutional territory: "These inflammatory images and the provocatively-named hotline cannot rationally be viewed as pure attempts to convey information to consumers. They are unabashed attempts to evoke emotion (and perhaps embarrassment) and browbeat consumers into quitting."

The Court relied heavily on data included in FDA's regulation that showed the graphic warnings would have little to no effect in reducing tobacco use. In particular, FDA's analysis of the regulation estimated that the warnings would likely cause no statistically significant change in U.S. smoking rates.

The nine graphic warnings proposed by the FDA include color images of a man exhaling cigarette smoke through a tracheotomy hole in his throat, and a plume of cigarette smoke enveloping an infant receiving a mother's kiss. These are accompanied by language that says smoking causes cancer and can harm fetuses. The warnings were to cover the entire top half of cigarette packs, front and back, and include the phone number for a stop-smoking hotline, 1-800-QUIT-NOW.

In the majority opinion, the appeals court wrote that the case raises "novel questions about the scope of the government's authority to force the manufacturer of a product to go beyond making purely factual and accurate commercial disclosures and undermine its own economic interest - in this case, by making ‘every single pack of cigarettes in the country [a] mini billboard' for the government's anti-smoking message."

The court also wrote that the FDA "has not provided a shred of evidence" showing that the warnings will "directly advance" its interest in reducing the number of Americans who smoke.

Tobacco companies increasingly rely on their packaging to build brand loyalty and grab consumers - one of the few advertising levers left to them after the government curbed their presence in magazines, billboards and TV.

"It's a significant vindication of First Amendment principles," said Floyd Abrams, an attorney representing Lorillard Tobacco. "There's never been any doubt that the government could require warnings on products that can have dangerous results. And what the court is saying is that there are real limits on the ability of the government to require the manufacturer of a lawful product to denounce the product in the course of trying to sell it."

The FDA declined to comment on pending litigation and the Justice Department said it would review the appeals court ruling.

In a statement, the Department of Health and Human Services said the administration is "determined to do everything we can" to warn people about the dangers of smoking, and that the labels are an "effective tool" in those efforts.

Public health groups are urging the government to appeal.

"While the tobacco industry has grown increasingly aggressive in preying upon the American public with misleading and fraudulent marketing practices over several decades, the warning labels have not been changed in 25 years," John R. Seffrin, chief executive of the American Cancer Society, said in a statement. "Existing warnings have failed to inform the public adequately of the risks of tobacco use. ... We hope the government can identify ways that the FDA can move forward with the new cigarette warning labels."